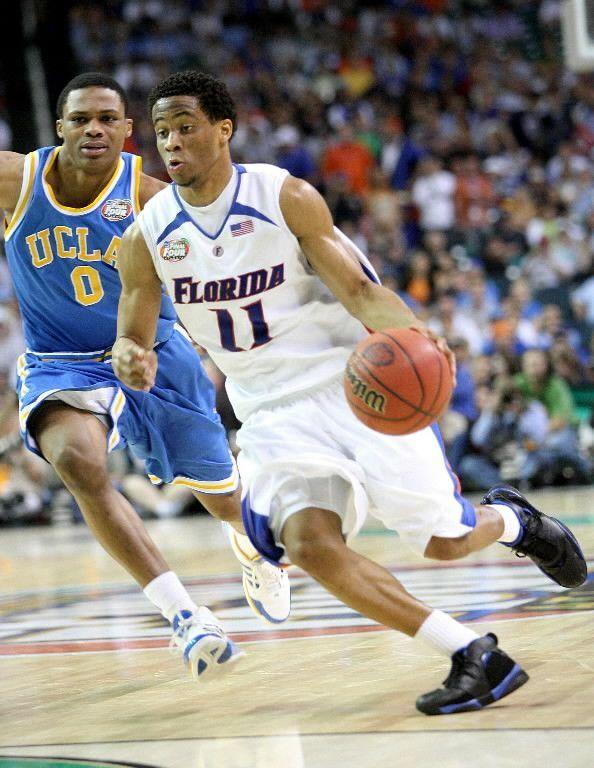 Former Florida point guard Taurean Green is back to dish out another assist for the Gators.

First-year coach Todd Golden’s embrace of the program’s past success led him to hire Green, who will serve as the new director of player development and a bridge to the Gators’ glory days.

The quartet formed the 2004 recruiting class eventually — and reverentially — known as the ‘04s.

Those teams are the last back-to-back champions and hold a special place in Gators’ sports history.

“The older I’ve gotten, the more I’ve been able to appreciate it,” Green, 35, said Wednesday. “Because being able to come to this university, being able to accomplish what we accomplished … it’s not easy.”

Green aims to provide perspective for younger players to help them develop the work ethic and team-first mentality that helped the ‘04s to a 68-11 record, highlighted by 18 straight postseason wins, during two seasons.

Those teams will forever serve as the gold standard at Florida. Yet the program began to lose touch with the past once coach Billy Donovan left for the NBA in 2015 and Mike White replaced him.

“I know a lot of guys just haven’t been back for whatever reason,” Green said. “But coach Golden has opened the door and wants guys to come back from former teams. That’s just a great thing that he did.”

Sensing the schism, Golden reconnected with Donovan after the 36-year-old replaced White, who surprisingly left in March for Georgia after seven seasons in Gainesville.

During those conversations with Golden, Donovan suggested he hire Green once he finished the 2021-22 season working for the Chicago Bulls alongside his former college coach following a long professional career.

Green, the No. 52 selection in the 2007 draft by Portland, did not catch on in the NBA. Instead, he played for 12 different teams overseas from 2008-21, when he ended his career with a title with Stal Ostrów Wielkopolski of the Polish Basketball League.

“I was able to travel to … I don’t remember exactly how many countries off the top of my head,” Green said. “But I was able to play in Italy, Greece, Spain. I’ve been all over the world. Being able to travel, get paid for what you love to do, I wouldn’t change anything.”

Green said he most enjoyed Lyon, France, the gateway to the Alps.

But the Boca Raton native feels more at home in Gainesville, though he barely recognizes a college town that has evolved into a small city.

“When I got here and got off Archer [Road], it was like there’s the Cheesecake Factory and there is PF Chang’s. Am I in the right place?” Green said. “I saw Celebration Point and I said, ‘Wow.’ It’s great for the city, great for the university and for recruiting.”

Green hopes to help the Gators return to greatness while embarking on a career in coaching, similar to his father Sidney, a college star at UNLV who played 11 seasons in the NBA.

“I’m a coach’s son,” Green said. “Obviously the best coach I played for was Coach D. But I also played for some good coaches in Europe. I learned a lot.

“I want to take the things I learned along the way and just share it with the younger generation.”

Green’s body of work at Florida offers a window into his vision of the game. He led the title teams with averages of 33.1 minutes and 4.2 assists. A 1,000-point career scorer for the Gators, Green also provided timely 3-point shooting and closed out games from the free-throw line, shooting 86.8% those two seasons.

The ‘04s decision to return for their junior seasons to win another national title and their style of play epitomized teamwork.

“A lot of guys don’t know how to play,” Green said. “A lot of guys on the AAU circuit it’s, ‘Hey, go score.’ There’s only one basketball. Everybody can’t score. It’s little details that help a team win.

“I want to be able teach that and bring whatever I can to help these guys.”

This article first appeared on OrlandoSentinel.com. Email Edgar Thompson at [email protected] or follow him on Twitter at @osgators.