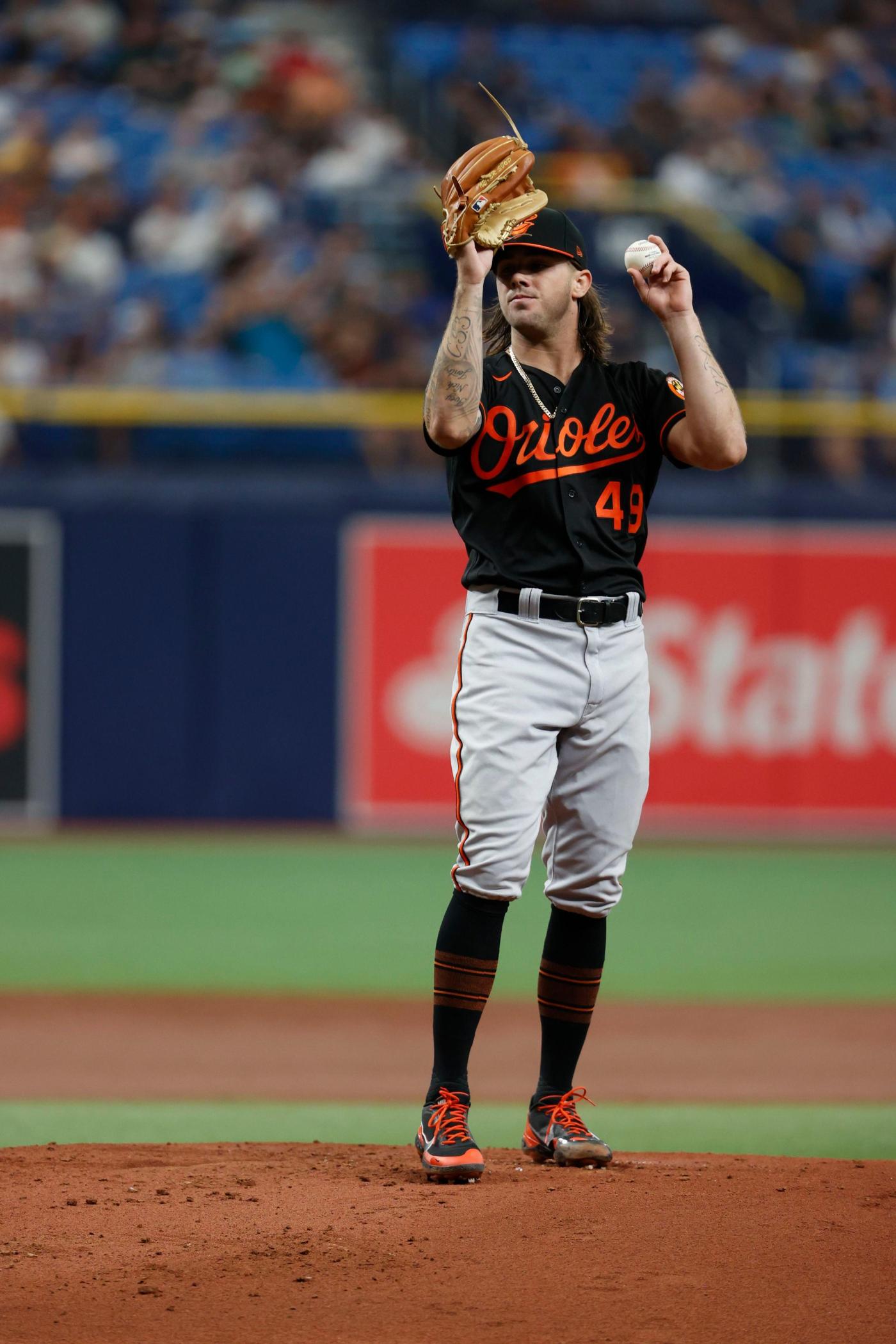 The word most frequently coming out of DL Hall’s mouth is “different,” because that’s the best way to describe his current situation. For as long as he can remember, since before high school, the left-hander has been a starting pitcher.

He had piggybacked a few outings before, but until August with Triple-A Norfolk, the Orioles’ fourth-ranked prospect had never taken the mound in the middle of an inning.

For a starter developing into a reliever for Baltimore’s September playoff push, that was one of the main hurdles for Hall to overcome. More than just the idea behind being a reliever, the 23-year-old had to rapidly learn the secrets of getting warm in a hurry, how to handle inheriting base runners and how to let it all ride in the one or two innings he’ll be on the mound.

The last one was the easiest. Hall doesn’t mind an opportunity to let his 100 mph fastball play if given the opportunity.

But in his four appearances in relief for the Tides — four opportunities to get comfortable out of the bullpen on the fly — Hall learned what works for him. And now as a September call-up for the Orioles, Hall can breathe fresh life into a bullpen that has thrown the eight-most innings of any group in the majors this season.

“It’s different,” Hall said, leaning on that word again. “Everybody has their own ways of getting ready. For me, just because I am new to it, I’ve kind of figured out I’m a guy, if I know I’m hot or have a chance of pitching, I’m going to be moving around the whole game. Every other inning I’m doing something.”

Even during Baltimore’s 3-0 win against Cleveland Guardians on Thursday night at Progressive Field, Hall couldn’t spend all nine innings doing nothing. He paced around the bullpen periodically and stretched, keeping himself loose for whenever he gets the call.

He’ll see some of his fellow relievers get ready, using a band to stretch then “start ripping fastballs,” Hall said. “But with me getting used to it, I’ve just been kind of using the whole game to stay loose and if my name’s called, then I’m ready. And if not, then I just got a little loose.”

The last month for Hall has featured a major league debut and a sudden change of direction. He started against the Tampa Bay Rays, allowed five runs in 3 2/3 innings, and was optioned immediately after the game to learn how to pitch in the bullpen.

Hall says he took it in stride. In his four appearances with Norfolk, he allowed three runs in 6 2/3 innings. Hall pointed out pitching in relief is a way to keep his innings down this season, which is a focus after he suffered a stress reaction in his left elbow after just 31 2/3 innings in 2021.

“They have a plan, and I trust in it,” Hall said moments after learning he was optioned Aug. 13. “I’m going to go down and work on what I need to work on, and hopefully come back and prove I belong to be here.”

Hall is here now, where he’ll pitch as part of a bullpen that has been outstanding this season. The group’s 3.16 ERA entering Thursday is the fourth-best mark in the majors, even after closer Jorge López was traded to the Minnesota Twins at the deadline.

An August ERA of 3.71 ranks 16th in baseball, however, and with one fewer late-inning arm, other relievers have shifted into new roles. That includes Joey Krehbiel and Bryan Baker, who saw their August ERAs balloon to 5.79 and 4.50, respectively.

As part of a postseason push in September, there are few low-leverage situations for relievers. Still, Hall could slide into a late-inning role, giving the Orioles an arm with a four-pitch repertoire and a fastball-slider combination that is imposing when Hall can command them. The bullpen could also welcome right-hander Tyler Wells at some point soon from an oblique strain.

Gearing up for a relief appearance changes Hall’s approach, too. For a normal start, Hall works through his four-seamer, slider, curveball and changeup. But as he tries to warm rapidly in the bullpen, Hall primarily throws his heater.

He’ll lean on his fastball and slider if he knows he’ll face two left-handed hitters. Hall might still throw one or two curveballs or changeups just in case, but he focuses on what he knows “I’m coming in to use.”

“We talked about it with him [Wednesday] about just being as aggressive as he possibly can for the time that he’s out there,” manager Brandon Hyde said. “He doesn’t need to worry about staying out there anymore, you don’t have to worry about monitoring your pitch count and those types of things. It’s about going to get the three hitters out this inning, and then we’ll go from there.”

This isn’t where Hall envisions himself. Going into spring training next season, he said he’ll be fighting for a place in the rotation.

But Hall also understands a bullpen role is what is required of him right now. And when he gets out there, he won’t hold back. Even if it is different.