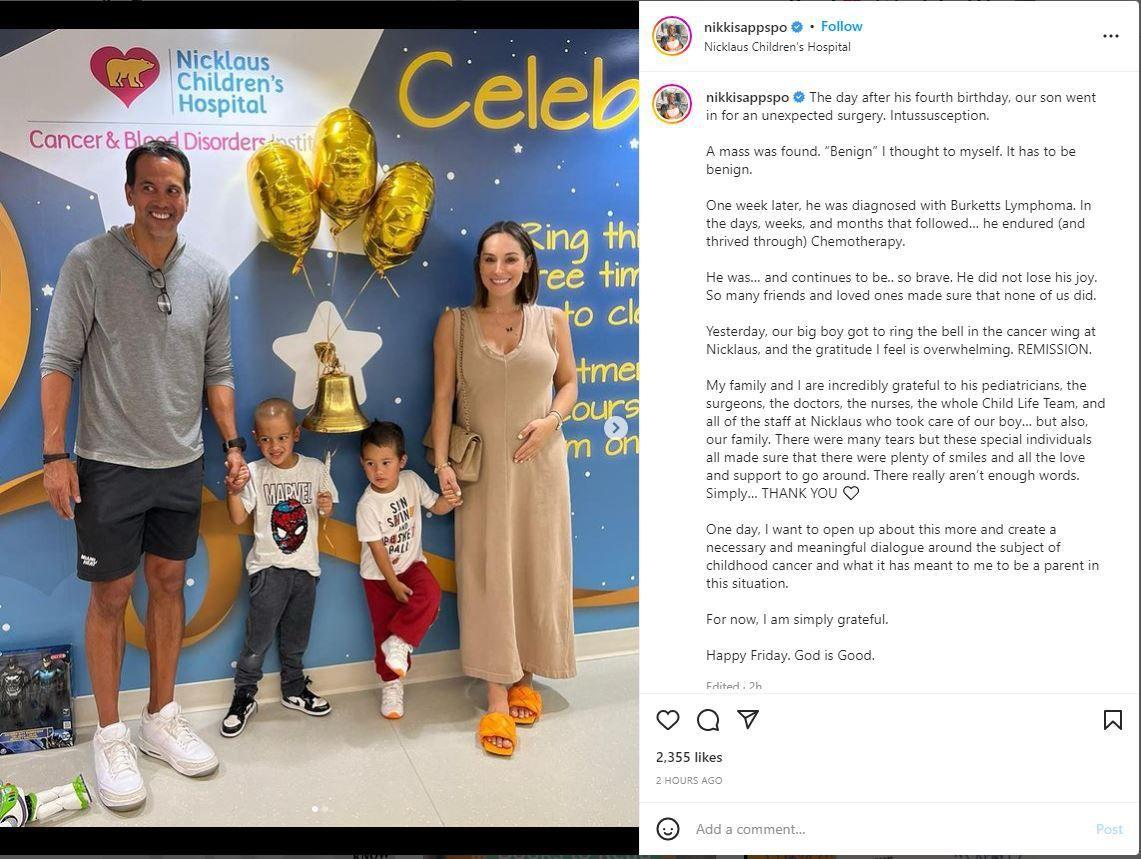 There is a moment during the Miami Heat’s annual Red, White & Pink Game when coach Erik Spoelstra typically finds himself welling up.

The embraces of breast-cancer survivors at midcourt during halftime of the intrasquad scrimmage is as heartfelt an instant as any during the course of the season.

Monday’s 6:30 p.m. event at FTX Arena will be even more heartfelt for Spoelstra ahead of his 15th season guiding the team.

“Of course it will,” he said during a private moment at training camp.

This summer, the oldest of Spoelstra’s three children, 4-year-old Santiago, completed treatment for Burkitt lymphoma, a type of non-Hodgkin lymphoma, a cancer of the lymphatic system.

The illness and subsequent remission was revealed in July in an Instagram post by Spoelstra’s wife, Nikki, that read, in part:

“The day after his fourth birthday, our son went in for an unexpected surgery. Intussusception.

A mass was found. ‘Benign’ I thought to myself. It has to be benign.

“One week later, he was diagnosed with Burkitt Lymphoma. In the days, weeks, and months that followed… he endured (and thrived through) Chemotherapy.

“He was… and continues to be.. so brave. He did not lose his joy. So many friends and loved ones made sure that none of us did.

“Yesterday, our big boy got to ring the bell in the cancer wing at Nicklaus, and the gratitude I feel is overwhelming. REMISSION.”

Spoelstra, 51, who has been largely private concerning family matters during his time with the Heat, left the statement at that at the time.

But asked during training camp about this team again hosting the annual scrimmage that benefits cancer care and research at the Miami Cancer Institute at Baptist Health South Florida, Spoelstra acknowledged that this year’s event will come with more acute emotions.

“Of course it will,” he told the Sun Sentinel. “I don’t know, to be honest, how I will be out there. There were a lot of emotions the last few months and behind closed doors. I had a lot of tough times.

“It’s really inspiring, halftime of that event. And we’ve had many people in our organization, wives that have been stricken with breast cancer. It always means a lot to all of us, because of that. And then to see the survivors all out there, it really is an inspiring emotional thing.

“It certainly will be even more so, considering what our family has gone through.”

It comes at a time appreciative of so much beyond the court.

And of cancer care that can heal a son and a family, with the heartwarming moments that are possible.

“You know, I realized that before, when you have people going through it,” Spoelstra said. “And then when it hits that close to home, man it scares the . . . out of you.

“But the inspiration of other survivors is what gets you through it.”

Tickets: Available through Ticketmaster with details at Heat.com.