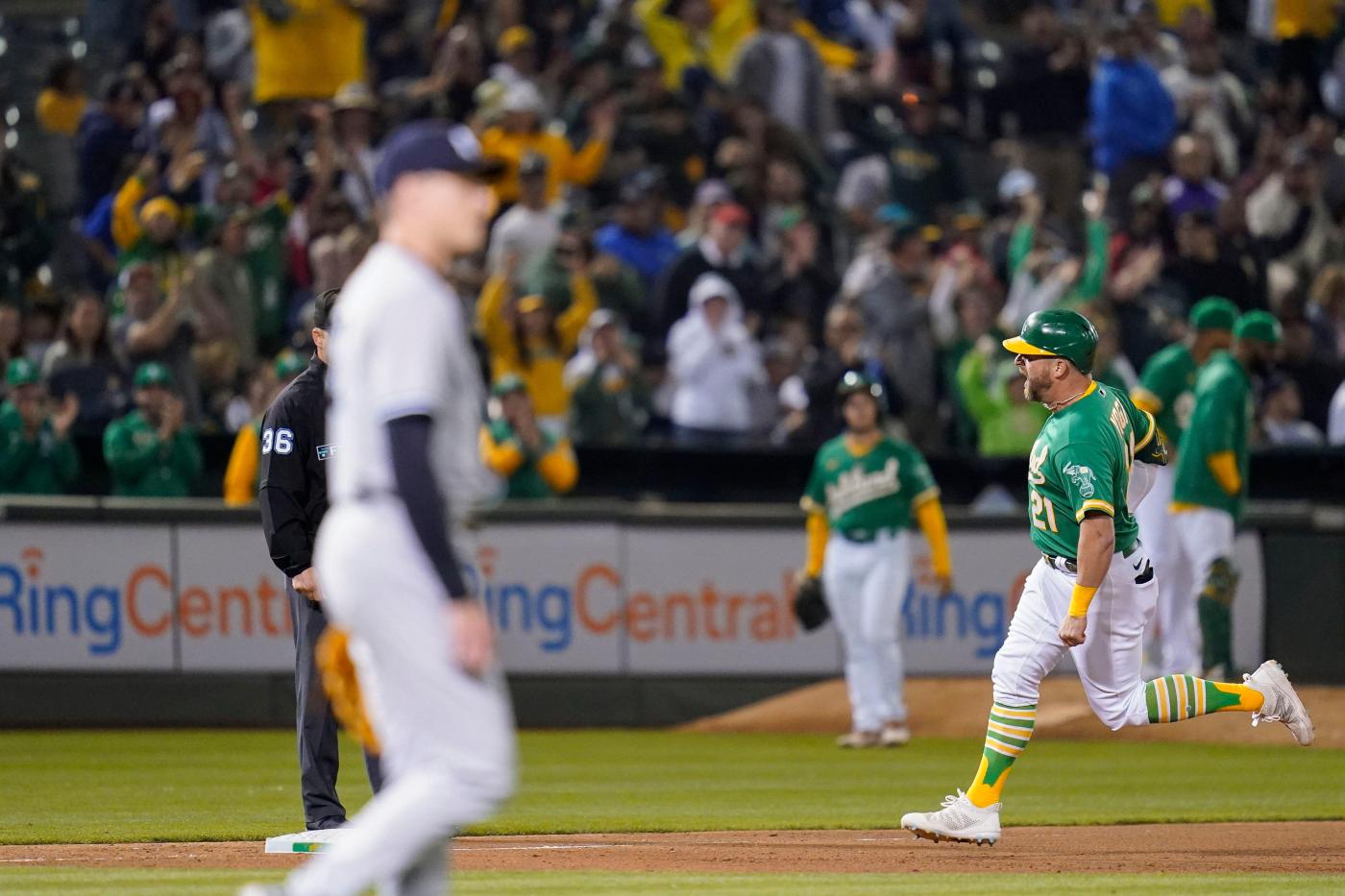 OAKLAND — Domingo German pitched a career-high 7.2 innings, shutting out the A’s, but the Yankees threw it away in a chaotic extra innings affair on Saturday. DJ LeMahieu’s attempt to turn a double play over a sliding Sean Murphy at second base went wide of first base, allowing Oakland to walk off a 3-2, 11-inning win over the Yankees at the Coliseum.

“Hard slide, I should have probably still made the play,” LeMahieu said. “He just got on my back foot and twisted me up a little bit.”

The loss snapped a five-game winning streak for the Yankees (78-49), who missed a chance to better their postseason positioning with the Astros, Blue Jays and Rays all losing before them on Saturday. The Yankees dropped to 7-7 in extra-inning games.

It was an ugly way to end a game that was brilliantly pitched on both sides.

Stephen Vogt gave the A’s a second chance with his one-out, pinch-hit, two-run home run off Ron Marinaccio in the bottom of the 10th. It was the first runs Marinaccio had allowed since July 31 and just the 11th hit he has allowed in 28 appearances this season and just the fifth to a left-handed hitter.

“I was attacking the zone, throwing strikes, but he got me on that one there,” Marinaccio said. “I went to the changeup which usually against the lefties is a successful pitch for me. Probably not the best executed one I threw.”

The A’s needed that after A.J. Puk almost threw it away in the top of the inning.

He nailed Anthony Rizzo with a 94 mph fastball near his right shoulder and then a wild pitch got away from Murphy, the catcher, allowing a run to score. Puk, standing at home plate as Murphy chased it, let the throw sail past him to let the second run score.

German pitched 7.2 scoreless innings, scattering three hits and striking out five. It was his best start since his breakout season of 2019.

Adam Oller, who was part of the package the Mets sent to the A’s to acquire Chris Bassitt this spring, baffled the Yankees hitters in his longest major league start. The rookie right-hander pitched eight scoreless, one-hit innings, facing the minimum 24 batters, striking out three and walking one.

“We weren’t able to mount much,” Yankees manager Aaron Boone said. “Oller kind of held us down and kept us in check.”

Oswaldo Cabrera, who had back-to-back three hit nights in the first two games here, broke up Oller’s no-hit bid in the sixth inning.

Luckily for the Yankees, German was matching Oller.

Nick Allen broke up German’s no-hit bid in the bottom of the sixth inning with a come-backer to German, who sailed the throw to the extra deep foul territory behind first base. He gave up a clean single to Pinder in the seventh.

After giving up five runs in his season debut against the Astros last month, German, who began the year on the injured list with a shoulder issue, has not allowed more than three runs in his last seven starts.