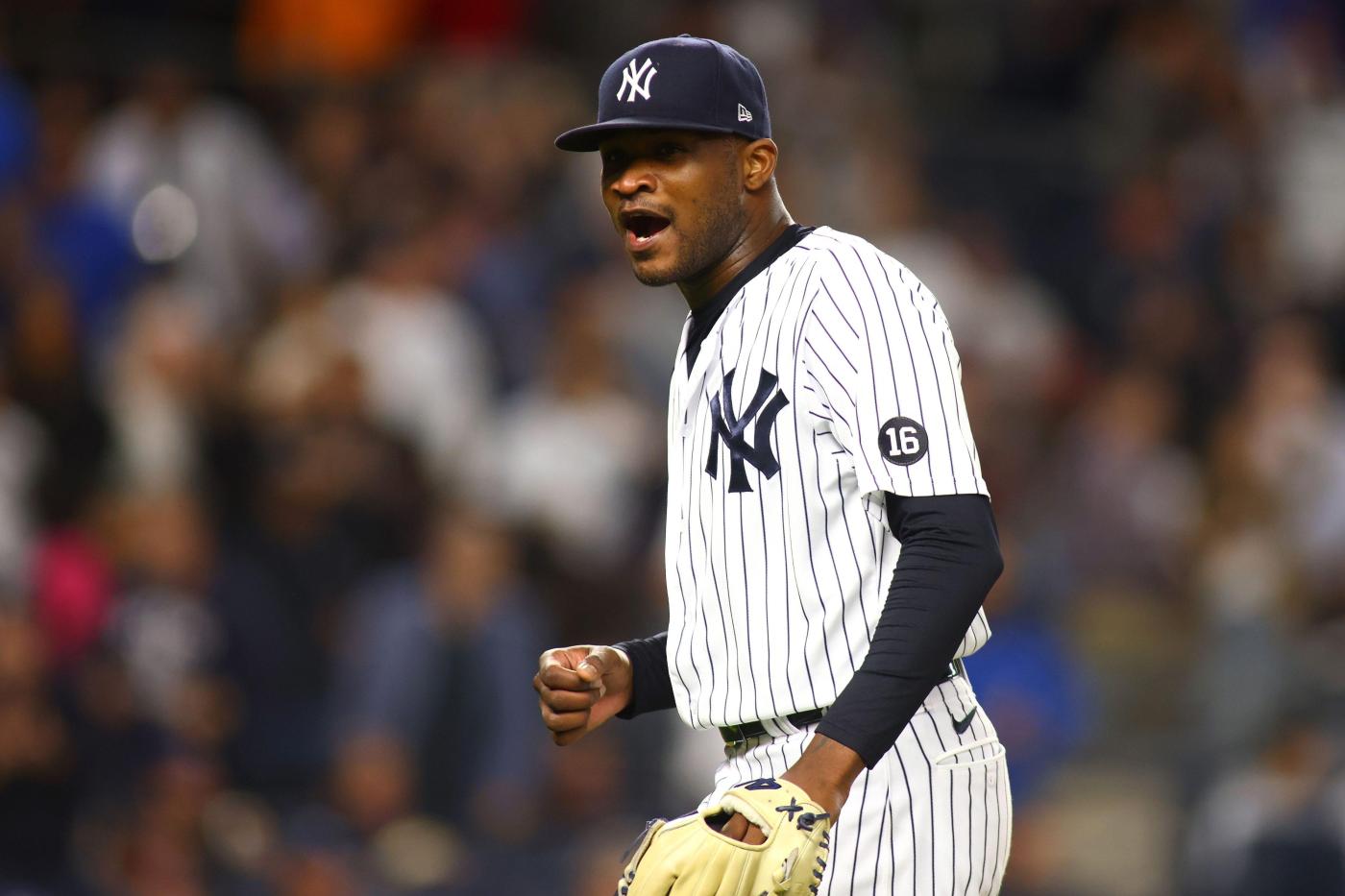 HOUSTON — There was no easing back for Domingo German. The right-hander who missed the first 93 games of the season, made his 2022 debut Thursday night and was hit hard in his return. German was charged with the loss in the Yankees 7-5 loss to the Astros at MinuteMaid Park.

German allowed five earned runs on six hits in just three innings of work against the Astros. He allowed two home runs, back-to-back homers to Yordan Alvarez and Alex Bregman in the first inning. He walked one and struck out two.

With less than two weeks to the trade deadline, Thursday was a good nudge to have the Bombers looking for some pitching on the trade market.

German is something of a hybrid and could be key in the second half for the Yankees.

He’s been a reliable starter, back in 2019 before he got suspended under the joint MLB/MLBPA domestic violence policy, he went 18-4 that season with a 4.03 ERA in 27 appearances, including 24 starts. Last year he made 22 appearances and 18 starts before being shut down with shoulder issues. In his career he is 22-14 with a 4.71 ERA as a starter and 2-2 with a 3.42 ERA as a reliever.

The Yankees hoped he would be key to helping the Yankees survive Luis Severino’s time on the injured list with a strained lat muscle. German could also be key to managing Nestor Cortes’ workload down the stretch.

“We just ended up wanting to give (Jameson) Taillon an extra day,” Yankees manager Aaron Boone said of the decision to start German. “With the 27th man (for the doubleheader), we’re able to do that with JP Sears. So it gives us that extra arm and with Domingo’s not all the way necessarily built up. So there is a potential piggyback situation there in game two, but also, we can activate Domingo in that second game. So I think the 27th man kind of gave that flexibility coupled with just wanting to give J-MO an extra day too.”

Sears was solid, allowing a two-run homer to Chas McCormick over three innings of work.

Taillon had hit a bit of a slump before the All-Star Break. The right-hander, who is 10-2 with a 3.86 ERA overall, allowed 21 earned runs in his last 27 innings pitched.

The Yankees’ All-Star break was cut short by having to make up part of this series in Houston on Thursday. Part of the morning was spent just making sure everyone arrived at MinuteMaid Park from wherever they were.

“I mean, it’s unique. I mean, especially at 12 o’clock, where guys are coming from different areas. Everyone’s not going to be able to get through your normal pregame routine. And things like that. So you just want to maybe pay attention to it a little bit more. We’re kind of sharing the load a little bit today in that we have some regulars down in the second game and obviously have a couple down in the first game,” Boone said. “So I’m kind of in my head looking at it as a three-game thing between a game today, a night game and the middle of the night travel to Baltimore. So I am just kind of paying attention to how we ramp them up a little bit.”

Boone pinch hit Giancarlo Stanton, who won the All-Star Game MVP on Tuesday night, in Game 1 and Aaron Judge, another All-Star coming in from Los Angeles, as the designated hitter for both games.

Boone, who spent the two-day break with family by the beach, said he made sure to watch his players at the All-Star Game. He was especially happy for Stanton, who crushed a huge two-run homer to be named the MVP. Stanton grew up in Southern California and went to Dodger Stadium as a little boy with his dad.

“It was awesome. I watched a lot of the festivities and was really excited for G,” Boone said. “You can tell that it meant a lot to him. I know going out there meant a lot to him when he got elected (as a starter to the American League team) and then to really stick one like only G can was awesome. So really excited. I enjoyed watching all the guys do their thing. And you can tell they really enjoyed the couple of days there.”

Right-handed reliever Ron Marinaccio is a possibility to return from the injured list as soon as this weekend.

“He’s doing well. I am sure you saw that he threw a rehab game the other day. As of now he’s scheduled to throw another rehab game for (Double-A) Somerset (Friday),” Boone said. “So we’ll see how that goes. He could be in play potentially this weekend too.”