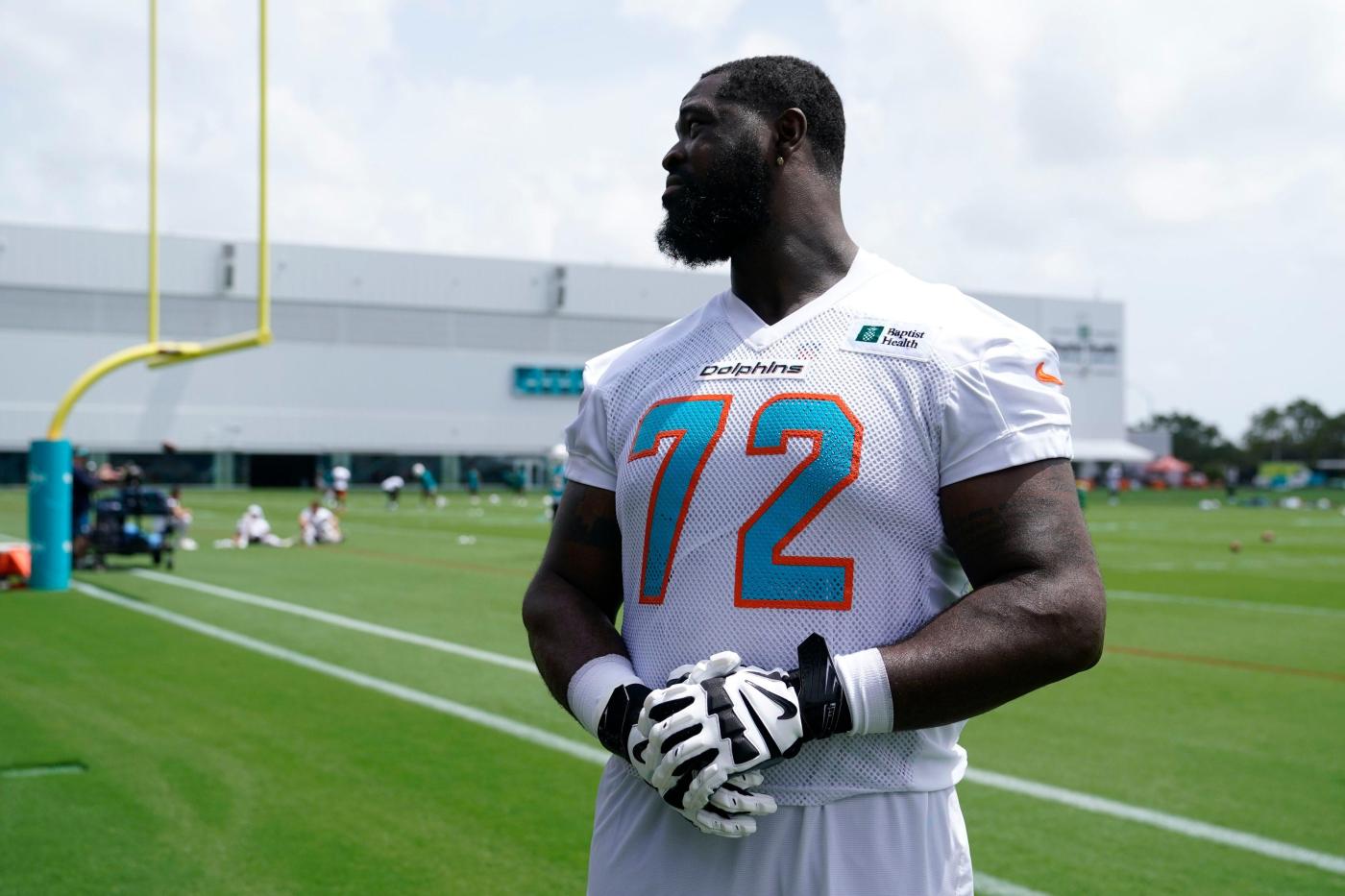 Miami Dolphins left tackle Terron Armstead is getting more practice reps, and it means the team’s prized free-agent acquisition on the offensive line is closer to returning to form.

Armstead has been brought along slowly throughout training camp after offseason surgery on his knee. On Thursday, at the second of two joint practices with the Buccaneers at their training facility in Tampa, Armstead saw his most 11-on-11 work since signing a five-year, $87.5 million deal with $30.1 million guaranteed.

“Felt good,” said Armstead, the 31-year-old three-time Pro Bowl selection. “Still knocking rust off, trying to get in the groove, get landmarks, techniques, hand placement, all those things. Just trying to check boxes, get that work in.”

Armstead, after participating in his first team drills with the Dolphins last Friday, had mostly alternated on and off days of limited participation through camp. On Wednesday, he was seen in Miami’s initial 11-on-11 period against the Buccaneers defensive front before calling it a day.

On Thursday, he increased the workload to participating in the team setting throughout, up until he asked out of the final series, reaching his limit.

“I’m getting close,” said Armstead, who missed nine games with the New Orleans Saints in 2021 due to knee and elbow injuries. “Trying to be conscious of load. I get in there and I’m having fun, it’s hard to be conscious of sticking to the plan, sticking to the load. I just ain’t want to go overboard dealing with some pain. Just time to be smart right now. It’s still August.

He didn’t merely go through the motions either. Armstead pancaked Buccaneers defensive lineman Logan Hall on one play. On Wednesday, he was seen in a 1-on-1 setting getting the best of Tampa outside linebacker Joe Tryon-Shoyinka, a 2021 first-round pick.

“A lot of impressive work [against] a damn good D-line over there, too, championship-caliber D-line,” Armstead said of how the offensive line performed as a whole. “It was great to get those looks, styles of play that was different. We did a lot of really good things, improved in communication. Excited about that. Technique-wise, I’ve seen some guys implement some things that they were struggling with early in camp.”

If Armstead can remain healthy and be the bulldozer of a run-blocker and solid pass protector he’s been for years in New Orleans, he could emulate something close to what new Dolphins coach Mike McDaniel had in San Francisco with Trent Williams, widely considered the NFL’s top left tackle.

The wide-zone blocking scheme McDaniel is implementing in Miami is new to most of the linemen, but as the Dolphins blockers grow further in tune with it, there is a belief the unit can be productive.

“We’ve got a chance to be really dangerous in that run game,” Armstead said. “We got to get more reps. It’s a different scheme for me and a lot of others, running backs getting on track — besides Raheem [Mostert]; he knows the offense inside and out — but it’s a scheme where you need to get reps to know where you fit, where the running back’s trying to go, the landmarks and stuff. That’s something we’re going to continuously work on and improve. Once we get to a place of comfort in that landmark and scheme, it’s going to be a real weapon for us.”

Given Armstead’s big workday on Thursday, it may be unlikely he plays in Saturday night’s exhibition at Raymond James Stadium. He hasn’t played preseason games the last several years with the Saints, and McDaniel indicated on Thursday he take a cautious approach with some veterans and possibly rest quarterback Tua Tagovailoa. If called upon by McDaniel, Armstead sees value in participating.

“We all need work, everybody,” he said. “You never get to a place where you just got it or are perfect. It’s always a progression, so whatever Coach feels like that is, we’re going to roll with it.”

Should Armstead get injured during the regular season, it could be troublesome for the Dolphins with Greg Little and Larnel Coleman the backup tackles on the depth chart. Armstead, however, feels the two youngsters have improved off of early struggles.

“I’ve been impressed with those two,” he said. “They’ve made huge strides, probably the most, I would say, respectively have made the most strides in this short period of time of camp.

“Greg is strong. He’s young, but he’s a veteran, so he’s played a lot of football. He’s experienced. Larnel’s got a lot of tools – his length, his strength, an intelligent player. Just trying to clean up technique things with both. Getting those guys comfortable and confident in the scheme so they can play fast.”

Armstead also said he likes what he has seen out of the right side of the line between tackle Austin Jackson, making a move from left tackle and left guard the past two seasons, and guard Robert Hunt.