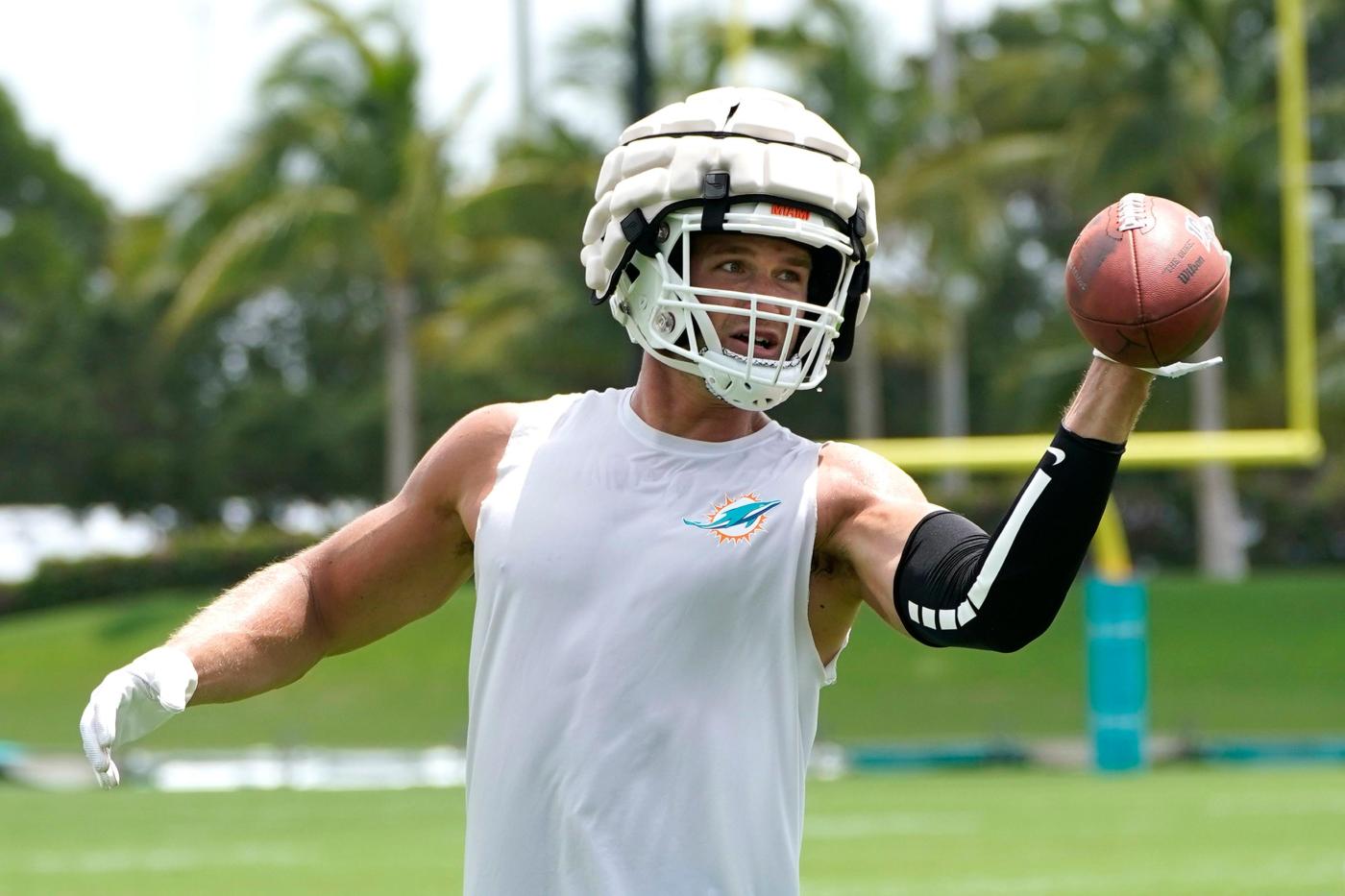 Mike Gesicki has a pivotal season on the horizon.

The Miami Dolphins’ tight end is set to play under the franchise tag in a new offense in 2022, which could help determine whether he gets the lucrative, long-term contract extension he covets with the Dolphins.

The franchise tag, as deceptively flattering as the term sounds, is not ideal for NFL players that want the most guaranteed money over multiple seasons. It’s essentially a one-year contract, but it does bring Gesicki a hefty payday in that one season, $10.9 million, as it’s valued for tight ends.

Gesicki doesn’t want to do anything disruptive for the team about his contract situation, as the Dolphins are almost a week into training camp.

“It’s a business. The team will do what’s best for the team,” he said after Saturday’s drills, the team’s fourth training camp session and first in front of fans. “I’m not a big complainer about it, make a big deal about it. It seems like, the guys that do, get paid a lot of money, so maybe I should have. I should keep coming to work, do what I’m doing.”

Gesicki will be the first Dolphin to play on the franchise tag since 2013, when defensive tackle Randy Starks did it. Since, Miami had tight end Charles Clay (2015), defensive end Olivier Vernon (2016) and wide receiver Jarvis Landry (2018) get tagged but not make it to those fall seasons with the team.

“We try to [express] at least 10 million reasons that he’s liked,” new Dolphins coach Mike McDaniel quipped on Saturday when asked if he feels he needs to make sure he’s showing Gesicki love. “I think it’s important to talk to the player — in my experience — to talk to the player candidly, understanding his situation. I talked to Mike early and said, ‘Hey, listen. This is something that’s best for the Dolphins.’

“It’s a business, so if you just approach it as, ‘OK, this is what it is this year; let’s use this, and here are your goals and acknowledge it,’ and it ends up being a blip in the radar.”

Heading into the past offseason, Gesicki and defensive end Emmanuel Ogbah were the team’s two key impending free agents on the 2021 roster. Ogbah also faced uncertainty, but with Gesicki receiving the tag, it opened things up for Ogbah to eventually get his four-year, $65 million deal with the Dolphins minutes before his free agency could’ve opened up to outside teams.

“He was like, ‘You’re welcome.’ That’s what he told me,” Ogbah said. “Mike’s a good dude. I’m rooting for him. I hope he gets what he deserves. Going out there just with something to prove this year.”

Gesicki will surely be motivated in 2022 to see if building on a career-high 73 receptions for 780 yards in 2021 leads him to that long-term deal next offseason. But he also now has to fit into a new scheme with new pass catchers around him.

Sure, there should be opportunities abound for Gesicki over the middle, or with a smaller defender on him that he can make contested catches over as McDaniel’s system creates confusion and sets up favorable matchups. Receivers Tyreek Hill, Jaylen Waddle and Cedrick Wilson will eat up a big share of the targets, though, as can running back Chase Edmonds as a dynamic pass catcher out of the backfield. Will this limit the numbers for Gesicki?

Through four training camp practices, Gesicki hasn’t seen many targets in 11-on-11 work. It appears his alignment will change. After spending more snaps either out wide or in the slot than in a traditional tight end post last season, Gesicki said he was only position in-line on Saturday.

With the wide-zone scheme a key component to McDaniel’s offense, Gesicki will have to prove he’s a capable run blocker, something he hasn’t been asked to do very much in four NFL seasons.

“Everybody knows that his ball skills and range are outstanding. That helps for separating defenders,” McDaniel said. “He wants to attack blocking with a different severity than he ever has before, and he’s fortunate and we’re fortunate that — guess what — his position coach Jon Embree, will settle for nothing less. All those things are something that he’s definitely embracing, and I’m excited to see what it looks like when it’s all said and done.”

Gesicki mirrored that mentality with his comments Saturday, although the blocking aspect will come to light more as the Dolphins get deeper into camp when full pads come on.

“You’ve got to understand the scheme, who you’re working with, footwork, hand placement. There’s a lot of stuff that goes into it. Definitely a much higher emphasis on it for myself this season than any other season I’ve been here.”

It can also benefit Gesicki that he has spent time with 49ers tight end George Kittle during the offseason Tight End U program, picking his brain to help him fit into McDaniel’s offense at their shared position.