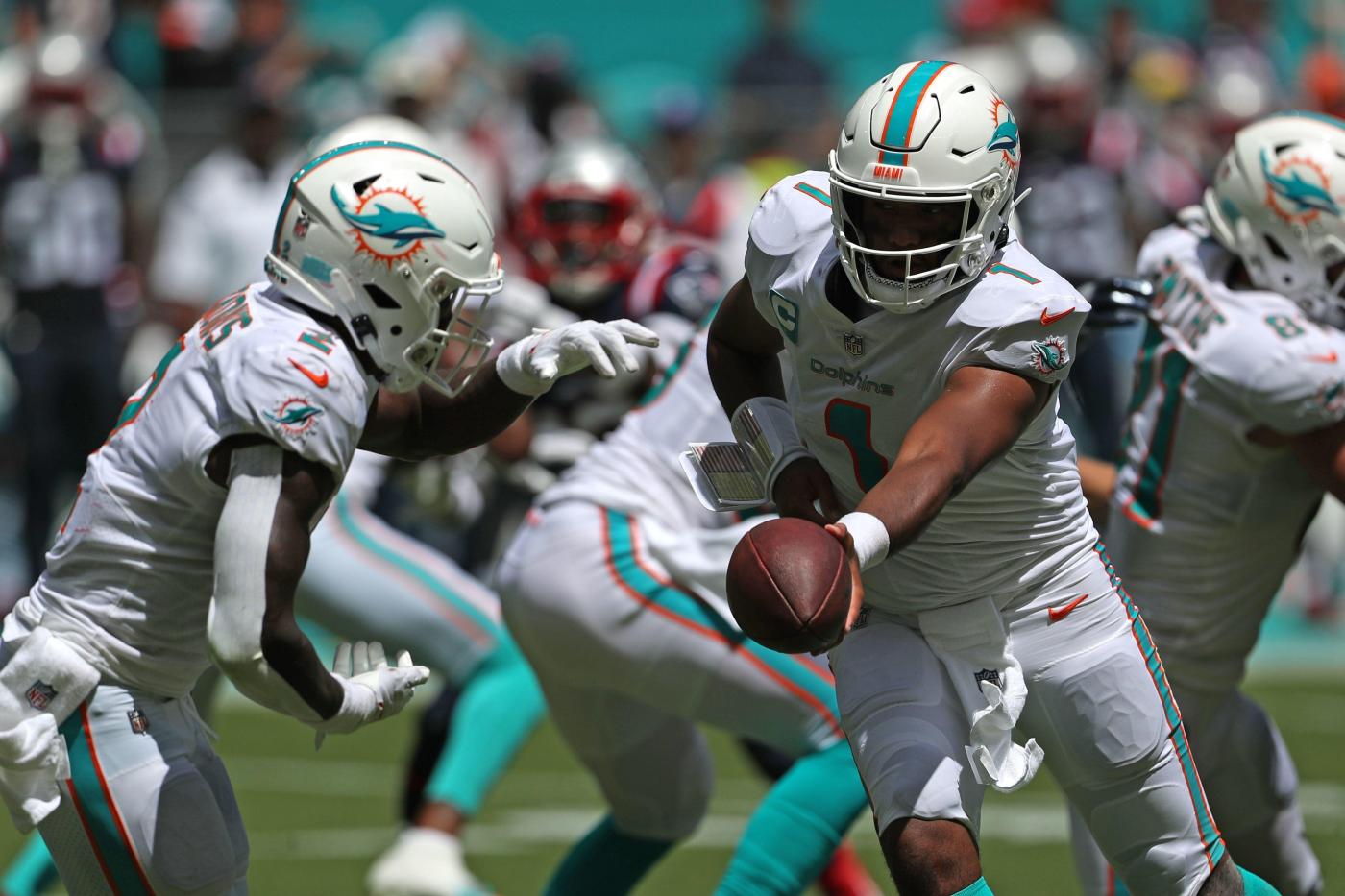 At halftime of the Dolphins’ 20-7 victory over New England they amassed 21 yards rushing on 10 carries, and that included runs of seven and six yards. That means their other eight first-half carries totaled eight yards.

Clearly, the running game needs work. But no one is worried. The Dolphins say they’re closing in on getting it right.

“We’re one technique away and one hand placement away from busting a long one,” reserve tackle Greg Little said.

Things improved a bit in the second half when, in the words of left tackle Terron Armstead, the Dolphins got better with their communication and identification.

The Dolphins’ run game, which is led by a work-in-progress offensive line, remains a work in progress. The Dolphins think they’ll see more progress Sunday at Baltimore.

“I think we had a couple of miscues with communication,” guard Robert Hunt said. “That’s everybody. I didn’t see some plays that I wish I would have told [center] Connor [Williams]. Or Connor didn’t see a play. It’s a back and forth deal.”

Coach Mike McDaniel, hired largely because of his offensive prowess, leans heavily on the run game. We saw that in San Francisco, where he was offensive coordinator last year. The 49ers were seventh in rushing (127.4 yards per game).

So, yeah, in the pass-happy NFL you still need a running game.

How much you need to run, however, is up to each team.

“The whole idea of the offense in general is not to have a ton of yards rushing every week, it’s to win, to have productive offense and to take advantage of what the defense is giving you,” McDaniel said.

But if the defense doesn’t give you much you need to be able to take something, and the Dolphins aren’t yet at that stage with their running game.

It should happen at some point this season but there’s no indication it’ll happen soon. Again, no one seems worried.

After all, they got help. On the offensive line it was the addition of Armstead, a three-time Pro Bowl selection, and Williams, the team’s highest-graded lineman vs. the Patriots.

The offseason search for running back improvement resulted in a coveted asset — speed.

But newly-acquired running backs Chase Edmonds (12 carries, 25 yards) and Raheem Mostert (five carries, 16 yards), who are both burners, did little damage in the opener with 41 yards rushing combined.

Those guys are plenty fast enough to hit a hole but they couldn’t manage to do it last week, largely because the holes weren’t there.

NFL NextGen Stats measures efficiency, which is basically defined as the total distance a ball carrier travels on a carry. The lower the number, the better the runner is at heading upfield, or going north. Edmonds had a 7.27 in efficiency, which ranked 30th in the league. By comparison, Saquon Barkley of the New York Giants and D’Andre Swift of the Detroit Lions tied for first at 2.31.

“We’d like to do a little better in the run game, but I think that’s what the first week is for,” quarterback Tua Tagovailoa said. “We got all the jitters out.”

Now, the Dolphins must take the next step and be effective, and that’s where things get tricky.

McDaniel only has a very general benchmark for team rushing attempts in a game.

“In your mind, you’re trying to get mid-20s to 30 runs,” McDaniel said, “but you’d never just commit to that because you’ve got to do what’s best.”

McDaniel said his requirements for the run game are on a case-by-case basis.

That means there isn’t a baseline of, say, 100 yards per game. Even with that in mind, everyone comes to the same conclusion about last Sunday’s rushing performance.

“It wasn’t up to our standards,” Edmonds said.

And everyone comes to the same conclusion about the prospects for the running game.

“You’ve got to work out the kinks,” Little said. “To us, we didn’t feel like we played that bad. It’s just one block here or one technique here away. We’re just going to improve every week.”