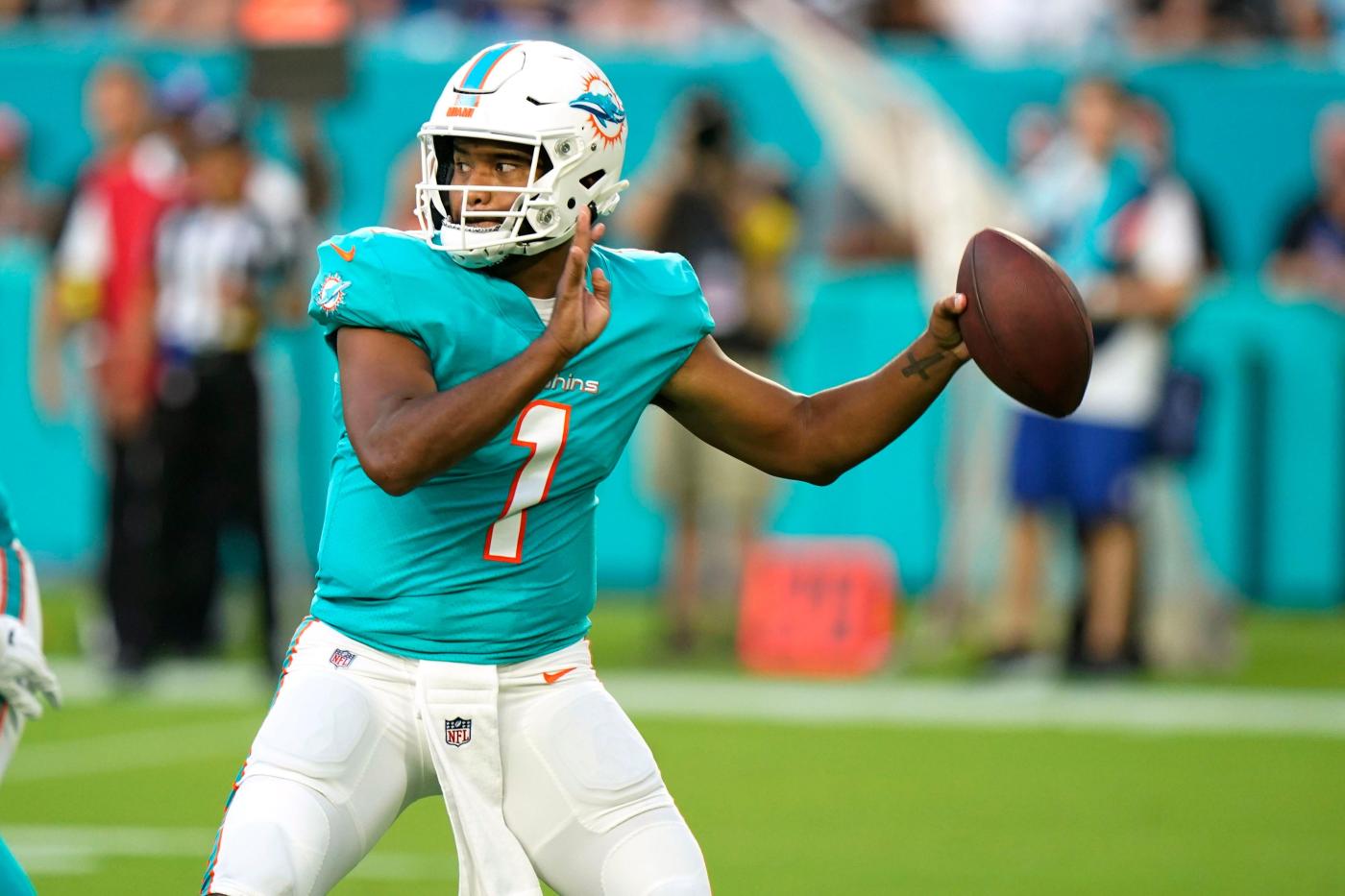 Quarterback Tua Tagovailoa went 6 of 8 for 58 yards in two drives over a quarter-plus of the Miami Dolphins’ preseason game against the Las Vegas Raiders on Saturday night at Hard Rock Stadium.

Tagovailoa went 3 for 3 for 29 yards on his second drive, including a 16-yard chunk on first down to wide receiver Trent Sherfield and a third-down conversion to running back Chase Edmonds where Tagovailoa was patient reading his progression before the pass to the flat.

The Dolphins were going for a fourth-and-1, but a false start from left tackle Larnel Coleman forced them to settle for a 46-yard field goal from kicker Jason Sanders.

Tagovailoa extended the opening drive with a third-and-4 completion to Edmonds for 17 yards after buying time and rolling left. That drive stalled when Tagovailoa hit tight end Mike Gesicki in the numbers between two defenders on third down, but Gesicki did not get his head turned around to see the ball coming. Gesicki was targeted four times on the two drives and made two receptions for 11 yards.

The opening series defensively showed how vital cornerbacks Xavien Howard and Byron Jones are to the unit. With Jones still on the physically-unable-to-perform list and Howard getting the night off, the Dolphins defense allowed mostly Raiders backups to drive 75 yards in 12 plays.

The Raiders were down to third-and-18 around midfield after a sack from defensive lineman Zach Sieler, but consecutive passes of 14 and 15 yards to tight end Jesper Horsted kept the drive going before running back Zamir White eventually scored a 2-yard touchdown run.

Miami’s cornerback depth may have taken another couple of hits in the first half Saturday. Nik Needham, who is the team’s top nickel cornerback, went to the locker room after trainers attend to his left hand, which he injured tackling White. He returned to the sideline but did not go back into the game. Fellow cornerback Keion Crossen was also looked at by trainers on the field after an injury.

Backup quarterback Teddy Bridgewater’s first pass attempt with the Dolphins resulted in a safety due to an intentional grounding penalty in the end zone. Gesicki missed the initial block that flushed Bridgewater out of the pocket.