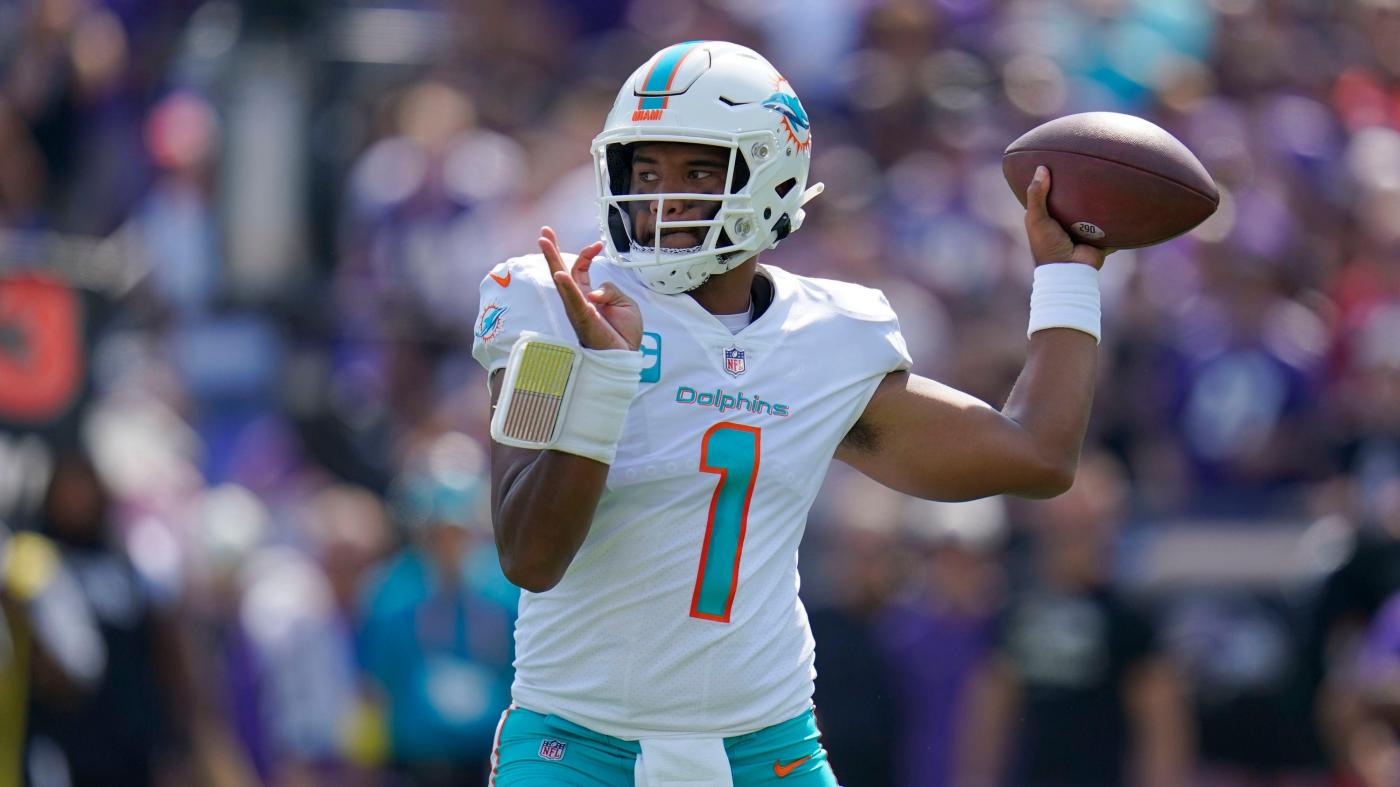 Is it time to buy into the Tua Tagovailoa hype in this new-look Miami Dolphins offense yet?

What started as another story of the Dolphins facing torment in Baltimore turned into a thrilling comeback where Tagovailoa threw for 469 yards and six touchdowns, both career highs with the touchdown mark tying a franchise record.

The Dolphins came back from down three touchdowns in the fourth quarter to beat the Ravens, 42-38, on Sunday afternoon at M&T Bank Stadium. The 21-point comeback is tied for the second-largest come-from-behind win in franchise history — and largest on the road.

“I was really hoping that we would get some adversity in this game, and I want to see how we would respond to a deficit, and apparently, they just took me way too literal,” said Dolphins coach Mike McDaniel.

“I just challenged them to say, ‘Who cares what the score is?’ It’s about how we play football together.”

The Dolphins (2-0) won in Baltimore for the first time since 1997, snapping a four-game losing streak there. McDaniel is the first Miami coach to start his tenure 2-0 since Jimmy Johnson in 1996.

Tagovailoa’s six passing touchdowns have only previously done by a Dolphin twice: Bob Griese (1977, at St. Louis Cardinals) and Dan Marino (1986, at New York Jets). He was 36 of 50 on Sunday. Four of his touchdown passes came in the fourth quarter as Miami outscored Baltimore (1-1), 28-3, in that final period.

“We were executing on all cylinders offensively,” said Tagovailoa, whose four fourth-quarter touchdowns tied an NFL record. “And then, when there were times when we didn’t execute, no one panicked.”

Tagovailoa’s top two targets, Tyreek Hill and Jaylen Waddle, combined for 361 receiving yards — Hill with 190 and Waddle with 171. Each had 11 receptions and two touchdown catches — the game-winner with 14 seconds left going to Waddle. According to NFL Research, the Dolphins became the first team in NFL history to have a player record 400-plus passing yards and five-plus passing touchdowns in the same game as two teammates recording 170-plus receiving yards and two receiving TDs.

Tagovailoa, who improved to 8-1 vs. Super Bowl-winning coaches with the win over Baltimore coach John Harbaugh, outdueled Ravens quarterback Lamar Jackson after Jackson’s effectiveness handling Miami’s blitz-heavy defensive approach appeared to be the story for much of the day.

Jackson looked closer to how he did in the 2019 opener against Miami, when he threw for five touchdowns in a 59-10 mauling, than he did in last year’s Dolphins upset when they attacked him with an unremitting blitz. The Pompano Beach native and Boynton Beach High grad had a perfect passer rating of 158.3 until late in the game. He finished passing for 318 yards and three touchdowns to different receivers — tight end Mark Andrews and wideouts Rashod Bateman and Demarcus Robinson. Jackson added 119 yards on the ground for his 11th career 100-yard rushing performance, an NFL record for a quarterback.

The final dagger among Tagovailoa’s four fourth-quarter touchdowns was a 7-yard strike to Waddle with 14 seconds left. A 28-yard Chase Edmonds run set the Dolphins up at the 7-yard line in the final seconds. All Jackson had left to do on the final play was throw a Hail Mary to the end zone, which fell incomplete.

“I ain’t got to say too much,” said Hill about Tagovailoa after an offseason of unrelenting support for his new signal-caller after asking for a trade from the Kansas City Chiefs to Miami this offseason. “All people got to do is just look at the film of just Tua and who he is and how consistent he is. That last drive that we had, it really showed who he was as a leader.”

Down 35-14 to start the fourth quarter, Tagovailoa first drove 75 yards in seven plays, capping the drive by hitting wide receiver River Cracraft from 2 yards out for the practice-squad elevation’s first career touchdown reception.

Hill was out momentarily, dealing with cramps, but once he returned, he scored long touchdowns on back-to-back drives. First, he went deep middle for a 48-yard touchdown over the top of the defense. Then, he flew by Ravens cornerback Jalyn Armour-Davis for a 60-yard score.

The Ravens answered as the reliable Justin Tucker knocked through a 51-yard field goal with 2:18 remaining before the Dolphins had the last laugh.

“[McDaniel] is always going to say this, and this is kind of like the mindset for our team: Adversity is opportunity,” Tagovailoa said. “And that’s how we look at it.”

The Dolphins started down in a touchdown hole immediately Sunday when Devin Duvernay, an All-Pro return specialist, took the opening kickoff 103 yards for a touchdown 13 seconds into the action.

The Ravens appeared primed to extend their early lead with an 18-play, 72-yard possession that took up 10:53, but they came up empty on the time-consuming drive. Jackson mishandled a snap on fourth-and-goal at the 1-yard line, and the fumble was recovered by Baltimore for a turnover on downs. Jackson appeared to try to move forward with the ball for a sneak before he fully controlled the snap.

Starting at their own 6-yard line, the Dolphins quickly maneuvered 94 yards to tie the Ravens, 7-7, thanks in large part to Tagovailoa’s connection with Waddle. He hit him once for a pass over the middle that went for 59 yards after Waddle’s run after catch and then again for a 6-yard touchdown on a screen.

That touchdown was scored with 10:54 left in the second quarter. The Ravens answered at the 10:44 mark. The very first play of the ensuing drive, Jackson found Bateman open cutting in against Dolphins cornerback Xavien Howard with no safety to stop Bateman over the middle after Baltimore’s pre-snap motion.

Baltimore, after fumbling earlier, took advantage of its next opportunity at the 1-yard line. Jackson tossed an easy pass to Andrews after their 25-yard connection with Andrews beating cornerback Keion Crossen got the Ravens down near the goal line on a play that was initially called a touchdown but overturned upon review.

Before halftime, Jackson drove the Ravens 80 yards in six plays over 51 seconds, linking with Robinson for a 12-yard touchdown.

A 15-yard touchdown connection between Tagovailoa and tight end Mike Gesicki inched the Dolphins to within two scores in the middle of the third quarter, but Jackson reeled off his 79-yard rushing touchdown late in the third to pull Baltimore back ahead by three touchdowns before the fourth-quarter comeback.

“This is one of my favorite wins of my entire career,” said linebacker Duke Riley. “You were in someone else’s home. You are down by that much in someone else’s place, things usually don’t come back and play like that.”

Miami’s first possession resulted in an interception as safety Marcus Williams tipped a Tagovailoa pass intended for Hill and then came up with the ball from his back. Williams intercepted Tagovailoa again late in the first half, dragging his toes inbounds along the sideline.

The Dolphins return home in Week 3 to host the Buffalo Bills in a divisional matchup. 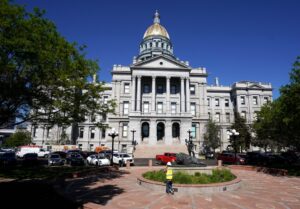