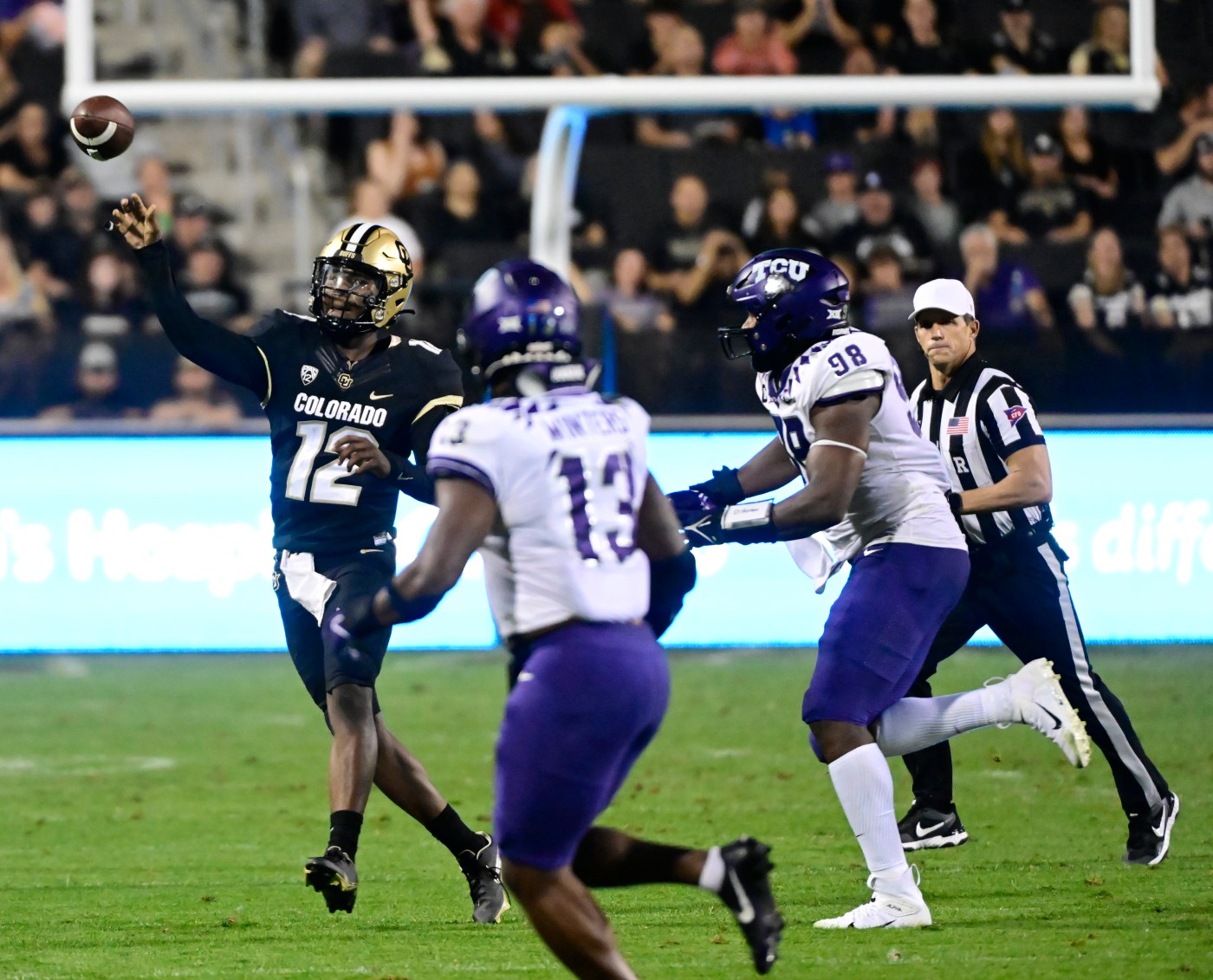 BOULDER — CU fans voted with their voices late Friday night. Then they voted with their feet — by leaving Folsom Field, en masse, before TCU could put the final touches on a 38-13 win over the Buffs in the season-opener for both schools.

And if third-year coach Karl Dorrell wanted to win back some goodwill from a skeptical Buffs fan base, let’s just say that wasn’t the way to start earning it back.

There were several points of concern, but two in particular did CU in.

Missed assignments followed by missed tackles doomed a Buffs defense that had hung in valiantly during the first two quarters, a half that saw TCU take a 7-6 lead into intermission.

With ground-happy offenses on tap in Air Force (Sept. 10) and Minnesota (Sept. 17), both on the road, that doesn’t bode well for a CU front seven that appeared to run out of gas late.

Sonny Dykes is an Air Raid disciple, but the Frogs opened the second half the old-fashioned way, using a ground attack to catch the Buffs off-guard while marching downfield.

A five-play, 75-yard TCU drive to start the third quarter began with a 22-yard Kendre Miller run to midfield and was capped by a 43-yard scamper by Emari Demercardo for a score that pushed the CU deficit to 13-6.

An impotent CU passing game — one that felt very 2021 — didn’t help, as the Frogs took advantage of a series of Buffs 3-and-outs to run away with the game. Literally.

Kendre Miller’s 3-yard run with 10:55 left in the game pushed the TCU lead to 23-6 and effectively put the outcome to bed. But the visitors weren’t done, as, before a mostly-empty Folsom Field, the Frogs added on two more scores on the ground to turn a close game into a laugher.

Sophomore Brendon Lewis, CU’s incumbent starter, got the nod to open the game. And despite a new offensive coordinator in Mike Sanford, the young Texan’s first-half performance and stat line — 9-of-13 passing for 58 yards, 35 yards on six attempts — eerily mirrored his inconsistent performances last fall.

Take out a 25-yard rainbow to Daniel Arias on his second throw of the tilt, and Lewis was 8-of-12 for 35 passing yards over the first two quarters. The Buffs passer found himself often checking down or tucking-and-running after one or two reads, averaging less than 3.0 yards per attempt as a result.

After opening the tilt by completing six of his first seven throws for 45 yards, Lewis’ second quarter saw him miss on four of six attempts for just 13 yards through the air. At the start of the fourth quarter, Lewis was averaging just 4.3 yards per pass attempt.

With 2:23 left in the half and CU trailing by one and pinned at its own 1-yard line, Dorrell finally made the switch to J.T. Shrout.

In his Buffs debut, the strong-armed Tennessee transfer completed his first three throws, including a 35-yarder to Arias, to drive the hosts to the TCU 45 with 38 seconds left.

As with Lewis, though, the Buffs offense stalled from there, with a run and three incompletions ending the quarter.

Shrout didn’t get the nod to start the second half, though, and CU fans expressed their displeasure by booing liberally whenever Lewis either came on, or came off, the field.

The junior transfer replaced Lewis for good early in the fourth quarter, with the Buffs already trailing 24-6. It was too little, too late, in hindsight, but the former Tennessee Volunteer gave those few in the stands who remained a little hope to cling to when he hit freshman wideout Jordan Tyson for a 23-yard score with 1:13 left in the game — CU’s first touchdown of the season.

Both of the Buffs’ expected starting QB options warmed up with the first team before the game, as Dorrell declined to tip his hand right to the end. Lewis was announced as the Buffs’ starter during pregame introductions on the jumbotron at approximately 7:49 p.m.

A few minutes later, that same jumbotron announced the start of the game would be delayed by weather.

A spirited crowd therefore had to wait out the opening kick, thanks to a lightning delay of about 45 minutes. It was the first weather-related delay of a tilt at Folsom Field since Oct. 3, 2015, when Oregon visited for a game that was also on ESPN and also featured an 8 p.m. kickoff. That contest eventually started at roughly 9:08 p.m., the latest start ever recorded for a CU football tilt.

The Frogs took advantage of swirling winds on Ashton Logan’s line-drive punt with 14:36 left in the first half, which nimble TCU return man Derius Davis took up the left boundary for a 60-yard touchdown and a 6-3 lead for the visitors. It was Davis’ fourth collegiate return for a score.