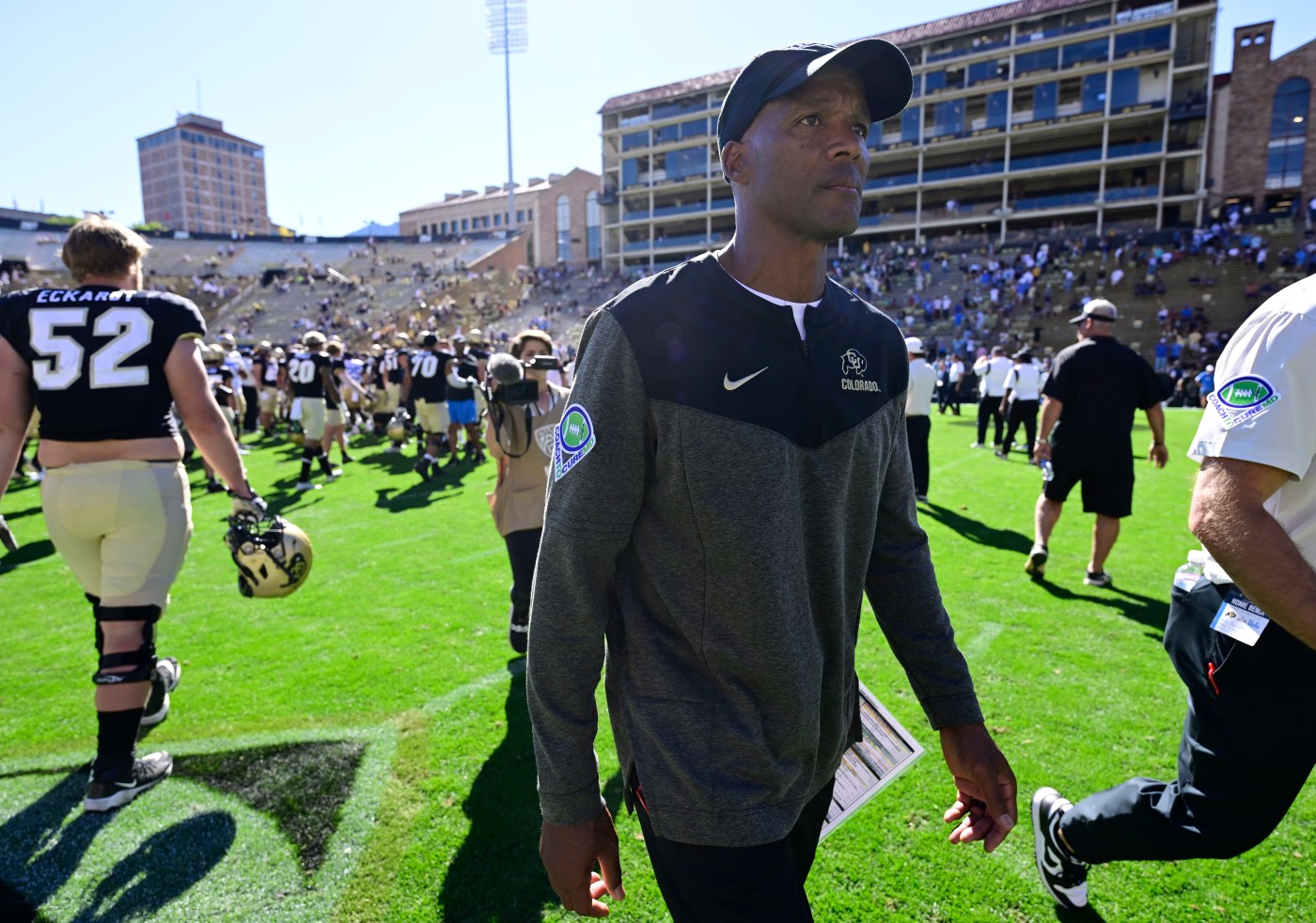 The Karl Dorrell Era in Boulder is over.

And for the third time in five years, the CU Buffs are on the hunt for a new football coach.

Both ESPN and The Athletic reported that the 59-year-old Dorrell has been relieved of his duties after 23 games at the helm and an 0-5 start to his third season.

CU is expected to owe Dorrell approximately $8.5 million. The buyout would’ve been $7.4 million if the university had done so after Dec. 31.

The news closed the books on one of the more curious recent coaching tenures in Buffs history. It began with a hiring that initially came as something of a shock, a reign that was delayed by a global pandemic and eventually started with a flourish, only to fizzle out badly.

Dorrell posted an 8-15 record at CU, 6-9 in conference games. But the veteran coach and former Buffs assistant was 4-15 over his last 19 games.

Fourteen of those 15 losses were by 15 points or more, and CU (0-5, 0-2 Pac-12) this past Saturday night became the first team in program history to open a season with five consecutive losses of 23 points or more.

It was an ignominious end to a tenure that saw Dorrell post a 4-2 record, 3-1 in Pac-12 play, during his debut season of 2020. Because of COVID-19, the season was initially suspended until spring 2021, then moved back to the fall and eventually delayed until the first week of November.

Dorrell, who hadn’t been a collegiate head coach since being let go by UCLA after the 2007 season, had been hired to replace Mel Tucker on Feb. 23, 2020.

CU opened that season — in front of only 554 fans at Folsom Field because of coronavirus restrictions — with a 48-42 win over UCLA. COVID cancellations reduced the Buffs’ revised regular-season schedule from eight games to five, but CU posted a 4-1 record, thanks largely to the running of tailback Jarek Broussard and a defense led by linebacker Nate Landman. The Buffs were one of only two Pac-12 teams who played in a bowl game in 2020, accepting an invitation to the Alamo Bowl, where they were trounced by Texas, 55-23.

While the Dorrell era opened to empty seats, ironically, the threat of empty seats post-pandemic may have also played a role in hastening his departure.

The ’22 season was pitched as one of fresh starts and new hope, as Dorrell replaced six full-time assistant coaches, four on the offensive side of the ball, eventually replacing coordinator Darrin Chiaverini with former Minnesota offensive play-caller Mike Sanford, who had recently been let go by Gophers coach P.J. Fleck.

But over the first month of the season, that side of the ball looked even shakier than it did the year before. Fans turned up in force for the season-opener against TCU but eventually booed the offense on and off the field and more than half had left by the fourth quarter.

A planned rotation of sophomore Brendon Lewis and transfer J.T. Shrout at quarterback proved highly ineffective for both prospective starters, and in a bid to jump-start his passing game, Dorrell inserted true freshman Owen McCown at quarterback for conference tests against UCLA and Arizona. The Buffs averaged 18.5 points in those two games, but the defense allowed 45 points and 43 points to the Bruins and Wildcats, respectively.

Whatever honeymoon had developed between Dorrell and the CU fan base had faded after a 4-8 season in 2021, the coach’s first regular season of more than seven losses and first season as a Pac-12 coach that didn’t end in a postseason berth.

Those rifts were exacerbated by the sheer volume of Buffs players who elected to take advantage of the liberalized transfer portal in the fall of 2021 and winter/spring of ’21-22. CU saw 23 players transfer out during those two cycles, a group that included starters Broussard, wide receivers Brenden Rice and Dimitri Stanley, cornerbacks Mehki Blackmon and Christian Gonzalez, and safety Mark Perry.

Dorrell was hired with the reputation for being level-headed during even the most arduous circumstances, but that rep took a curious turn early during the 2021 season, his second at the helm and first that wasn’t reduced by COVID-19 cancellations. After a frustrating 10-7 loss to then-No. 5 Texas A&M at Empower Field at Mile High on Sept. 11, Dorrell snapped at a beat reporter. Following a 30-0 loss at home to Minnesota the next weekend, the coach reportedly declined to completely fulfill his postgame interview obligations to the CU football radio network.

And in a clip that went viral nationally, moments after a 37-14 home loss to USC, Dorrell jostled a KCNC-TV photojournalist, with the coach appearing to shove the photojournalist’s camera as he left the field. Dorrell later apologized privately and publicly for the latter incident.

Note: This is a developing story and will be updated. Please check back to denverpost..com for more details.