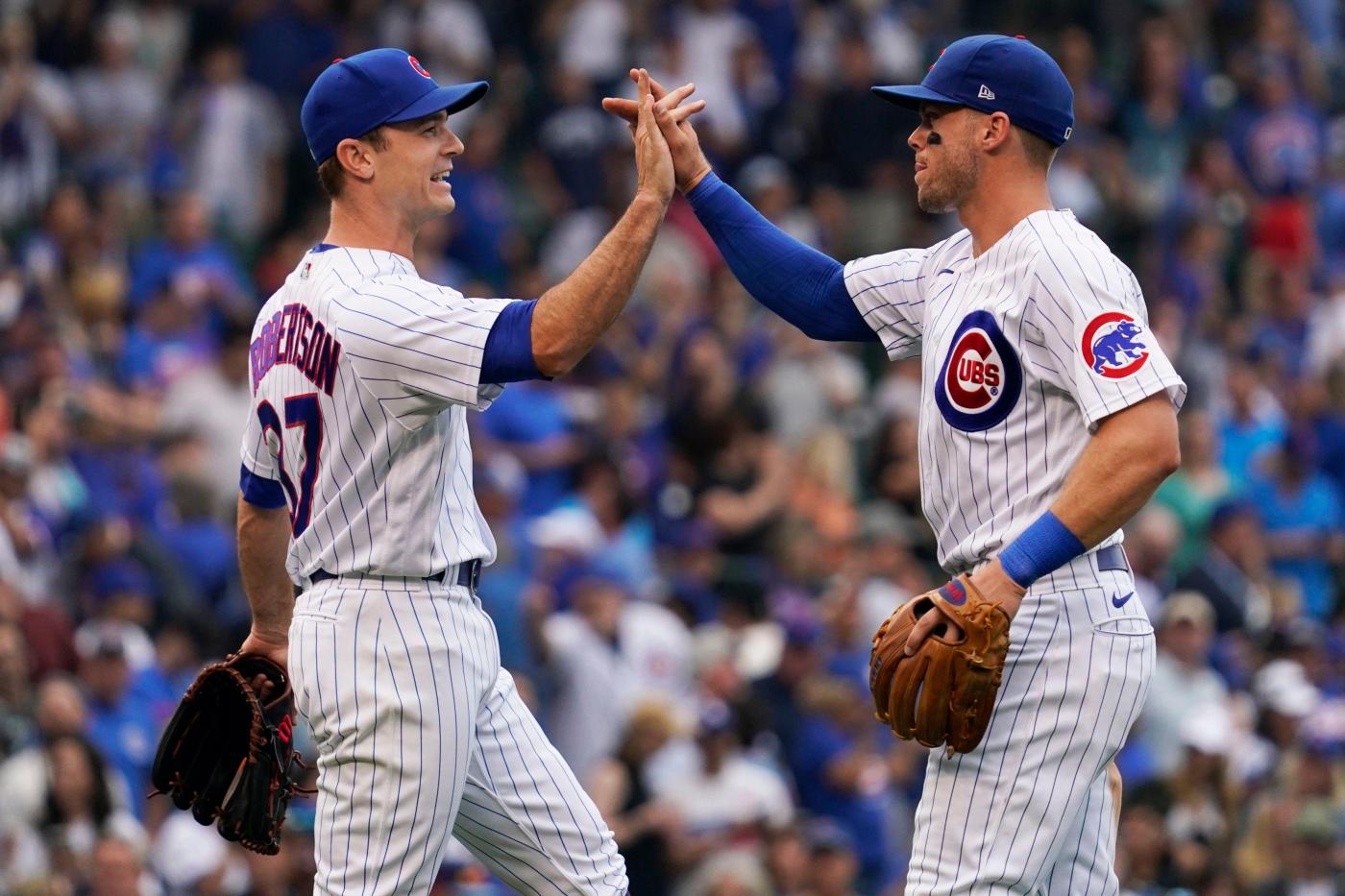 Pieces of metal either bent or ripped off, a broken hand sanitizer with a piece of masking tape holding it together and a splintered chunk of wood on the frame were telltale signs that someone — or perhaps multiple people — vented on the wooden structure holding the players’ bats and helmets.

The beaten-up bat rack served as a perfect metaphor for the 2022 Cubs season, which reached the end of the first half Sunday with a 3-2 comeback win over the New York Mets.

Nico Hoerner’s run-scoring single in the two-run eighth handed the Cubs their first win at Wrigley since July 2 against the Boston Red Sox.

“When you lose a lot of games in a row, you almost forget what it feels like,” starting pitcher Adrian Sampson said. “When you win a lot of games … you just know how to win. This is a good reminder for guys that this game is hard. We’re in the major leagues, and wins are hard to come by.”

The Cubs avoided their second 10-game losing streak and moved out of a last-place tie with the Cincinnati Reds in the National League Central, improving to 18-32 at Wrigley. They’re on pace for 51 home losses, which would eclipse their all-time worst mark of 31-50 in 2013.

Sampson’s pitching and some late-inning heroics sent the crowd of 34,424 home in a good mood. The Mets scored their two runs off Sampson on a steal of home by Starling Marte in the first after a botched pickoff play at first base and an RBI blooper by Pete Alonso in the fifth that first baseman Frank Schwindel misplayed in short right field.

But Hoerner’s third single gave the Cubs the lead in the eighth, and David Robertson closed the door in the ninth.

After Saturday’s doubleheader loss to the Mets, manager David Ross lauded the team’s effort against “a first-place team with a $300 million payroll.” Actually it’s $259 million, but who’s counting?

Nevertheless, Ross seemed to suggest the Cubs are the little engine that could instead of a big-market franchise valued by Forbes at $3.36 billion. The truth is Cubs Chairman Tom Ricketts chose this route and could compete with the Mets’ payroll if he wanted to.

But you can’t blame Ross for feeling as though he’s being asked to win battle after battle without enough weapons, even as he knew what he was getting into. The Cubs went 33-64 over their final 97 games in 2021 and are 35-57 at the break, giving them a .360 winning percentage (68-121) under Ross since June 13, 2021. His predecessor, Joe Maddon, posted a .581 winning percentage in five years on the North Side before being let go.

Before Sunday’s game, Ross said he welcomed the challenge of bringing this organization back to respectability.

“I think we all know we’re not where we want to be,” Ross said. “But the difficult challenges we go through make us better every single day, myself included. The players, being in the environments we’re getting put in right now, we’re going to be able to handle those moments better in the long run, years to come. Playing good teams (and) competing deep into games, extra-inning games, those are all really good things. We’ve just got to figure out ways to win ballgames, and I think we will.”

Whether most of the players learning from the first-half struggles will be here in “years to come” is doubtful. Some probably won’t be here after the Aug. 2 trade deadline, including All-Star catcher Willson Contreras, who was mired in a 1-for-36 slump before his eighth-inning single Sunday.

Cubs President Jed Hoyer is expected to unload in the next couple of weeks, though “unload” might not be the proper terminology. Back in 1997, when the Cubs lost their first 14 games and came out of the All-Star break with a win-or-else decree from the front office, manager Jim Riggleman corrected a reporter who used the term.

“This is not cattle here,” Riggleman said. “We don’t use words like ‘unload.’ It’s not a matter of unloading.”

Similarly, the Cubs would prefer you not use the word “rebuild” 25 years later. It’s always something with this organization. Perhaps they should hand out a list of forbidden words in spring training.

“You can’t get down and dislike each other because it can sure get nasty,” shortstop Shawon Dunston said then. “This is a good team. But when you win, everybody loves you. And when you lose, no one does. We have to like each other, whether we like it or not,”

This year’s team gets along fine, and Hoerner said there’s a lot to look forward to in the second half.

“Summer at Wrigley is always a positive to start with, so at least that’s guaranteed,” he said. “Take it for what it is, whatever is next. The Cubs have always done a really good job of putting quality people in the clubhouse, even with the turnover we’ve had in the last three, four years. That’s something I’ve always been very grateful for. … At the very minimum we have good people that are are going to be competing hard the rest of the season.”

You never know what the future will bring. The ‘98 Cubs, one of the most exciting rides in franchise history, followed the ‘97 debacle. Still, it could be a long climb to get back to where this team needs to be, and all it starts Friday in Philadelphia.

For now, take a deep breath and relax.

The worst part is over, right?