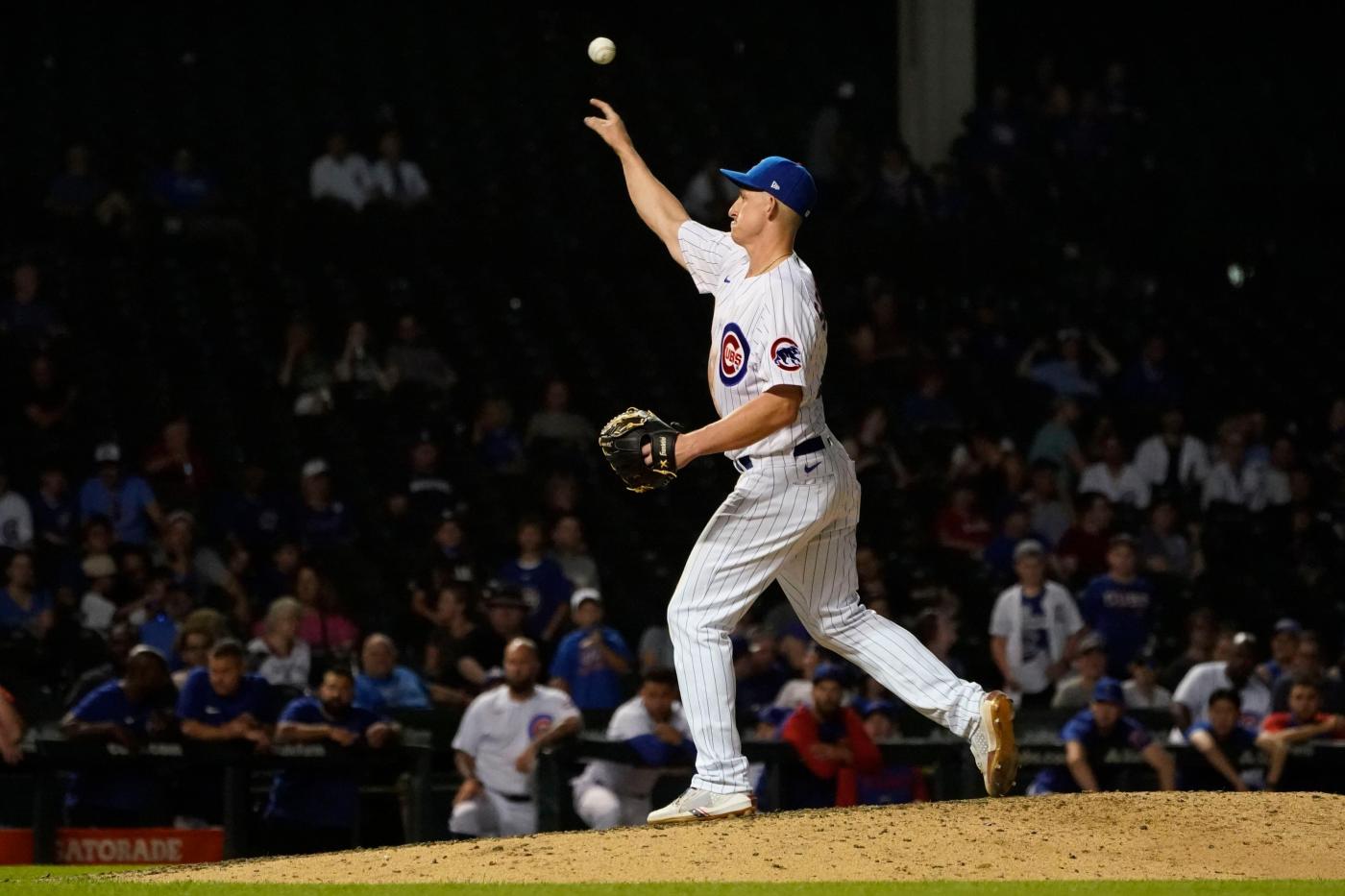 When Stephen Colbert watched Chicago Cubs first baseman Frank Schwindel pitch in relief during an 18-4 loss to the New York Yankees a few weeks ago, the late-night talk show host was amused by Schwindel’s eephus pitch.

“I’m no baseball player,” Colbert said on “The Late Show.” “And neither apparently is Frank Schwindel.”

Instead of laughing along and enjoying the national shout-out, the usually easy-going Schwindel took umbrage last week when asked about Colbert’s remark.

“I didn’t appreciate that one,” Schwindel said. “I’d like to see him do it.”

That’s something we both can agree on. I’d also like to see Colbert pitch for the Cubs. He couldn’t do much worse than the current bunch, and we already have tired of watching Schwindel pitch at the end of lopsided games.

Colbert made his one and only appearance at Wrigley Field in September 2016, when he threw out a ceremonial first pitch disguised as a hot dog vendor named Donny Franks. It became a hilarious segment of Colbert’s show a few weeks later.

While listening to Colbert talk in the Cubs dugout that afternoon about the many neighborhoods he lived in during his Northwestern and Second City days, you could tell he really enjoyed being on the field. He professed a love for Wrigley Field and recalled going to games to watch some bad Cubs teams in the 1990s.

Inviting Colbert back to Wrigley for a pitch-off with Schwindel would seem like a no-brainer for the Cubs marketing department and its trusty sidekick, the Marquee Sports Network. A Colbert-Schwindel matchup not only would give fans something to look forward to during this lost season, but also might help them cope with the Cubs’ plight.

We all could use a few laughs these days.

The current Cubs probably are too young to realize the team once was a staple of late-night talk show jokes. It made sense based on the organization’s long history of sucking. During a season-opening 14-game losing streak in 1997, manager Jim Riggleman addressed some of the shots Jay Leno and David Letterman took at the Cubs on their late-night talk shows.

“No one likes to be the brunt of jokes, the Jay Leno stuff,” Riggleman said. “I haven’t seen it, but I heard about it. But this is the situation we put ourselves in.”

Of course, the abuse was merited, even if it was not appreciated.

“I’ve never had time for sarcasm,” Riggleman said. “It’s a cheap laugh. It’s very easy for people to use sarcasm. A lot of people use it … it’s their shtick. There will always be a market for it, but that doesn’t mean I have to like it.”

Years later, Cubs manager Joe Maddon used sarcasm to great effect with his “Try Not to Suck” slogan in 2016. But not everyone can laugh at themselves the way Maddon did.

Talk show hosts changed over the years, and so did the Cubs, who finally ended their championship drought under Maddon in 2016. The Cubs might have thought late-night jokes at their expense were history after the historic World Series win, especially after Anthony Rizzo, David Ross and Dexter Fowler portrayed male strippers on “Saturday Night Live.” Instead of being the punchline, a trio of Cubs gladly twerked on late-night TV for laughs.

But now the Cubs have returned to their roots, making them fodder for comedians and talk-show hosts everywhere. And with injuries to Marcus Stroman and Wade Miley, two veteran starters brought in to try to make a rebuilding team respectable, it only can get worse.

Ross, the former SNL twerker and “Dancing with the Stars” alumnus, finds himself in charge of a team rapidly slipping into oblivion. After Monday’s 12-1 loss in Pittsburgh, the Cubs’ June ERA stood at 6.79, more than a run higher than the second-worst team — the Washington Nationals at 5.42.

Matt Swarmer was scheduled to pitch Tuesday night for a team that has allowed double-digit runs in four of its last nine games, losing by scores of 18-4, 12-5, 19-5 and 12-1. Without a slaughter rule to stop the bleeding, the Cubs are forced to go all nine innings.

Without even looking up the worst month of pitching in Cubs history, the one that sticks in my mind is June 1999, a standard of futility that defied belief. Under fun-loving pitching coach Marty DeMerritt, the Cubs staff compiled a 6.58 ERA that month, serving up 43 home runs in 27 games.

The loss of Kerry Wood to elbow surgery before the season hurt, but the Cubs still had veteran starters with decent track records in Steve Trachsel, Kevin Tapani, Jon Lieber and Terry Mulholland and a young stud named Kyle Farnsworth. All of them collapsed at the same time, taking a contending team down with them. The ’99 Cubs began the month seven games over .500 and one game out of first place in the National League Central but ended it at .500, 6½ games back on their way to a 95-loss season.

DeMerritt was a pro wrestling fan who believed he could get more out of his pitchers by talking them up as one of the league’s best staffs. The joke was on him.

“I came in with my spit and vinegar, saying we were going to do this and do that, because I felt that at the time,” DeMerritt said after being fired along with Riggleman and other coaches. “But as things unraveled, certain things didn’t happen. I guess it’s easier to fire a few than numerous.”

As Greg Maddux once said, one of the keys to succeeding in the game is knowing which coaches not to listen to. DeMerritt was one of those.

Of course, 1999 was during the Steroids Era when hitters ruled. The major-league batting average was .271 with a .434 slugging percentage. Hitters struck out only 16.4% of the time.

Baseball is now dominated by pitchers. Entering Tuesday, the league average was .241 with a .392 slugging percentage and a 22% strikeout rate. That makes watching Cubs pitchers struggle a much more onerous task than in ‘99.

True to form, the Cubs on Monday sent Adrian Sampson, who tossed 4⅔ scoreless innings Sunday against the Atlanta Braves, down to Triple-A Iowa. The move was made to reduce the staff to the mandated 13 pitchers, and Sampson was deemed expendable for the moment. Ross told reporters in Pittsburgh it was an “extremely difficult” conversation because the decision was not “performance-based.”

When you have baseball’s worst staff in June and send down the one guy who has pitched well, something definitely is out of whack.

It’s another reason late-night talk show hosts aren’t laughing with the Cubs, they’re laughing at them.