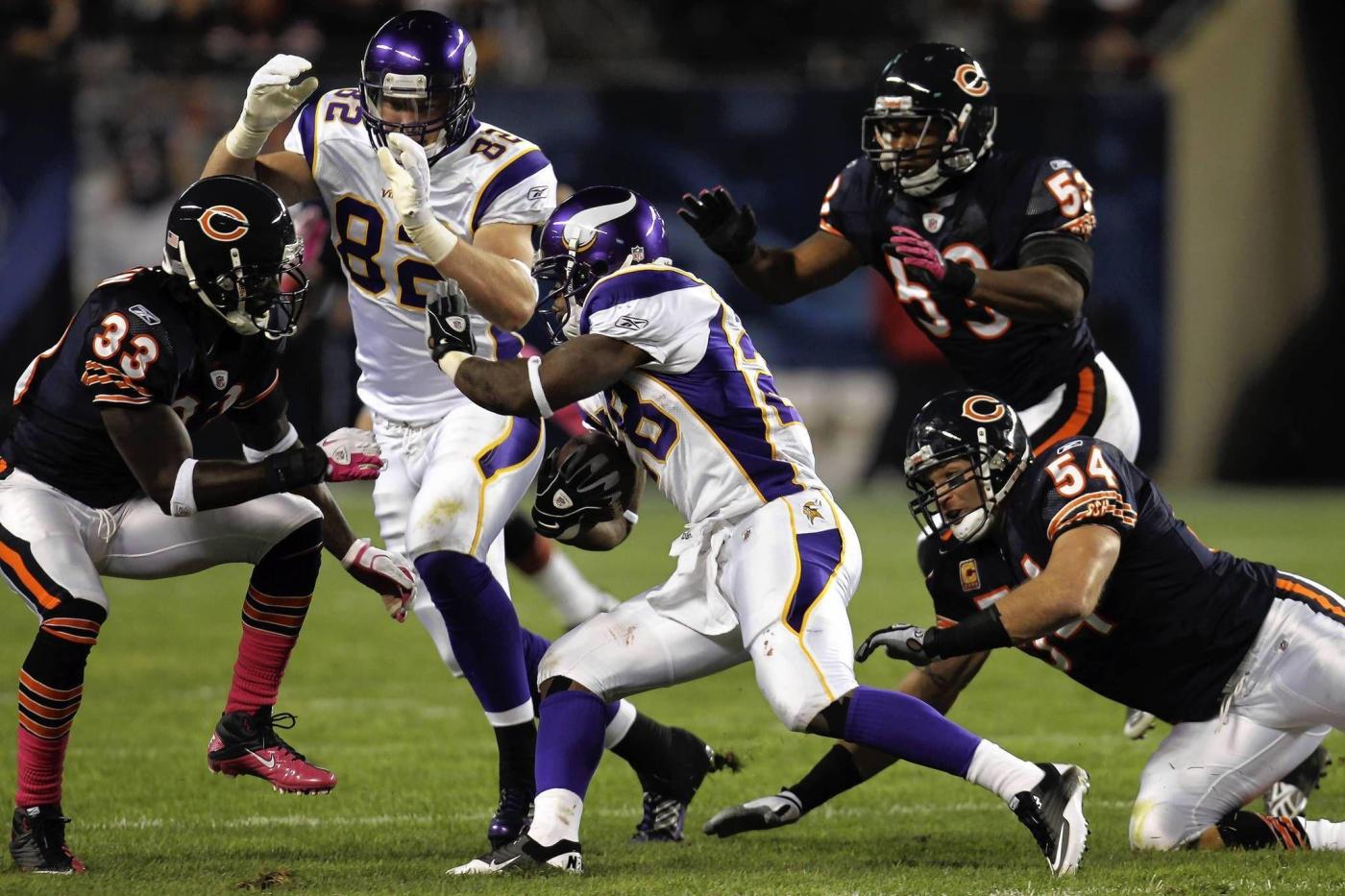 When Chicago Bears rookies convened for their first minicamp in May, their introduction to franchise history came from one of the team’s most prolific creators of takeaways.

In Charles Tillman’s speech to the newcomers and later in private conversations, he offered advice on how to be a professional, on the way players must change their work and attitudes going from college to the NFL and on what a good football team means to Chicago.

And he also relayed this bit of wisdom, which he came to understand during 12 years with the Bears while totaling a franchise-record 42 forced fumbles along with 36 interceptions, ranked third in team history.

“This ball is worth a lot of money,” Tillman recalled in a conversation with the Tribune. “There are 22 people on the field and there’s one football. And if you can somehow make this football come out of the other guy’s hand or you can get this football a lot, it will make you rich.

“And it will win you a lot of games. More importantly, it will get you the respect around the league for the kind of player you are.”

As Bears coaches have revealed the defensive identity they are trying to create and players have talked about the fanaticism with which they are expected to go after the ball, Tillman’s visit to Halas Hall seemed like the perfect choice for coach Matt Eberflus to set a tone.

Tillman was part of a Bears defense that ranked in the top 10 in takeaways in seven of Lovie Smith’s nine seasons. Under Eberflus’ mentor Rod Marinelli as defensive coordinator in 2012, Tillman put together an All-Pro season that included 10 forced fumbles and three pick-sixes as the Bears led the NFL with 44 takeaways.

And Tillman, nicknamed “Peanut” at birth, is the namesake of the “Peanut Punch,” the technique to force a fumble that still is referenced weekly around the NFL.

“The turnover is named after him, so to know how much of what he did is so popular and so famous, it puts a little bit on you,” Bears rookie cornerback Kyler Gordon said. “You want to add those tools to your box and do whatever you can do to get those turnovers.

“It’s really built into our whole culture, just being fanatical about getting the ball out and punching all the time and being consistent and finding ways to create turnovers.”

Eberflus and defensive coordinator Alan Williams have brought to the Bears their HITS principle, with similarities to Smith’s philosophies, that last season helped the Indianapolis Colts defense total 33 takeaways, second in the NFL.

Can the Bears return to the tradition of being a takeaway machine? Tillman had some thoughts about what it takes, starting with his famous punch.

It was a thrill for the rookie safety.

“That’s the OG right there,” Hicks said, noting he has watched clips of Tillman’s signature move since he was in high school, though it was gaining steam long before that.

Tillman doesn’t know where the name came from. He imagines an editor somewhere suggesting “The Peanut Punch” and exclaiming, “Run with it! Print!”

The origin of the move, though, is one Tillman has told several times.

In a 1999 game against Wofford, Tillman, a Louisiana-Lafayette cornerback, had 20 tackles while playing in front of his former high school coach, Rodney Southern. When they met after the game, Southern told him, “Man, if you would have just swatted the ball, you would have had five or six fumbles.”

“It was kind of like a light bulb that went off,” Tillman said.

The following season, Tillman knew he was faster than most of the opposing players and purposely took bad pursuit angles on tackles so he could punch the ball out from behind. He became so good at it, his teammates knew what was coming and were prepared to scoop up the ball.

But when the Bears drafted Tillman in the second round in 2003, he realized he no longer could use the same tactics.

“I couldn’t purposely take bad pursuit angles because, just as fast as I thought I was, those guys were faster,” Tillman said. “I started punching it out as I made the tackle as the guy was coming up. My very first game (against the San Francisco 49ers), it was a special teams play, I punched it out. … Day 1, forced fumble.”

Tillman’s long arms and ability to wrap up while also going for the punch made him so good at it that he averaged 4.9 forced fumbles per season from 2007-13. He believes his mindset to secure the tackle first minimized the risk that comes with such a move.

Since retiring after the 2015 season, Tillman has visited the Carolina Panthers and Buffalo Bills to teach the punch, and coaches sometimes will call him to help players with it. A friend called him from a coaching clinic in Texas to tell him they were teaching it.

Bears players said they practice the punch and strip attempts daily, with Gordon joking he gave himself a “Peanut Punch assist” for his attempt against the Seattle Seahawks in the preseason that linebacker Joe Thomas eventually knocked out.

And Tillman, who joined the Pro Football Hall of Fame ballot in the 2021 class but awaits potential entry, takes pride in hearing “Peanut Punch” on NFL broadcasts, especially when he’s watching with his 13-year-old son.

“It’s actually kind of cool to hear,” Tillman said. “It’s cool for my kids because (they) are like, ‘Oh, wow, they said your name, Dad.’ Because when I played my kids were young, so I don’t think they fully understood the life and everything.”

He tells players now the key to the punch is eye discipline.

“What are you looking at? A lot of times I see people walking in there and punching just to punch, and it doesn’t make sense,” Tillman said. “If you and I were boxing and you’ve got your mitts over your face, I’m not going to keep punching there. I’m going to punch somewhere else where you’re not blocking. I’m trying to find that open area, and that’s really the key: You have to find that open area and know how to punch.”

With Hicks, Tillman talked about different exit angles for the ball depending on whether a tackle is being made from the side or behind. He relayed the benefit of knowing an opponent’s ball-security tendencies and whether that player secures with one hand or two as he’s being taken down. And he talked about not being afraid to go after it.

“It’s also one of those things where you can’t be scared because you’re kind of vulnerable doing it,” Hicks said. “But when you practice it so much, it just becomes second nature.”

And that’s where the mindset Bears coaches are trying to instill comes into play.

‘Thou who runneth to the ball …’

Tillman has the video pinned to the top of his Twitter profile, a clip from a Sept. 24, 2006, game against the Minnesota Vikings that he thinks is “the true essence of that Lovie Smith defense.”

Vikings quarterback Brad Johnson threw a short pass to Travis Taylor, who looked to be one-on-one with Tillman. But within a flash Ricky Manning came in for a hit. Lance Briggs did a Superman leap toward Taylor, “like he was off the top rope in the WWF,” Tillman said. Tommie Harris rumbled in from behind. Tillman popped back up after getting knocked down. Danieal Manning helped finish it off.

At one point there were nine Bears around the football.

Tillman still can recite the coaching mantras that created that type of swarming play and also helped minimize the risk when a player got too aggressive on a strip attempt.

Former defensive coordinator and linebackers coach Bob Babich told his players to “treat the ground like a hot stove.” If they fell, they needed to jump up and get in on the play in case a teammate missed a tackle.

“If we were playing Green Bay and you’re tackling a player, I better see a swarm of white or blue jerseys. I don’t want to see no green when that tackle comes,” Tillman said. “That was the image that he instilled in us.”

As Bears players learn the similar demands of Eberflus and Williams through their HITS principle, they have come up with their own cheeky saying, which they’re sure can be found somewhere in Shakespeare’s work.

“Thou who runneth to the ball, good things shall happen,” cornerback Jaylon Johnson said.

It’s part of a relentless effort the new coaching staff demands of players, constant hustle and intensity — and takeaway attempts on every play.

“It’s all they talk about,” Hicks said. “When we’re in film and we pass up a strip attempt, they’re on our head. Like, ‘You’re better than that. You know that’s not what we’re doing here. Get a strip attempt.’ That’s the standard, no matter who you are.”

Most coaches crave takeaways. Former Bears defensive coordinator Sean Desai had a takeaway bucket last training camp to encourage players, but the Bears forced only 16 turnovers in 2021, ranked 26th in the NFL.

But Williams and Eberflus, who coached one of the next great Peanut Punchers in Colts linebacker Shaquille Leonard, think their policy of not walking by a missed strip or interception attempt — along with the focus on it in practice and film sessions — helps.

“If you have 10 chances and you’re going for the ball 10 times, the percentages are always better than if you don’t strip or if you try to knock the ball down all the time.”

Williams’ comments were in response to a question about how talent versus mindset factors into forcing turnovers.

Because that’s the caveat about the Bears returning to the days of being a takeaway machine.

The Bears defenses of the early 2000s had a wealth of talent, starting with Tillman, Briggs, Harris, Brian Urlacher, Mike Brown and later Julius Peppers. There is talent on the 2022 Bears — such as Robert Quinn and Roquan Smith — and Williams and the players have indicated they see their potential differently than outside perception.

But there’s no question that as general manager Ryan Poles slowly builds the roster, there are also several young and unproven players on the defense.

“You definitely have to have talent,” Tillman said. “I don’t think you can go out there with some scrubs and win. We had a lot of talent. We had great coaching, and I think with great coaching, you had good students, us the players.”

And that’s where the Bears at least can begin their quest to again be a “Takeaway King,” as rookie safety Jaquan Brisker’s shirt read after a recent practice.

On his visit with the Bears, Tillman told stories and talked football with Eberflus. He said Marinelli “knew how to get every ounce of effort, sweat, blood, tears” out of his players.

Tillman was intrigued by what Eberflus wants to create in Chicago.

“To me that was like, ‘Oh, wow, he is a Marinelli disciple,’” Tillman said. “He knows defensively in order to win this game, we need the ball. It’s not about big hits, it’s about staying in your gaps, it’s about taking the ball away and it’s about 11 guys doing one thing, not one person doing 11 things.

“He’s going to put his twist on it and make it his way. Time will tell. Like the rest of this city, I’m hoping he’s extremely successful in his first year.”