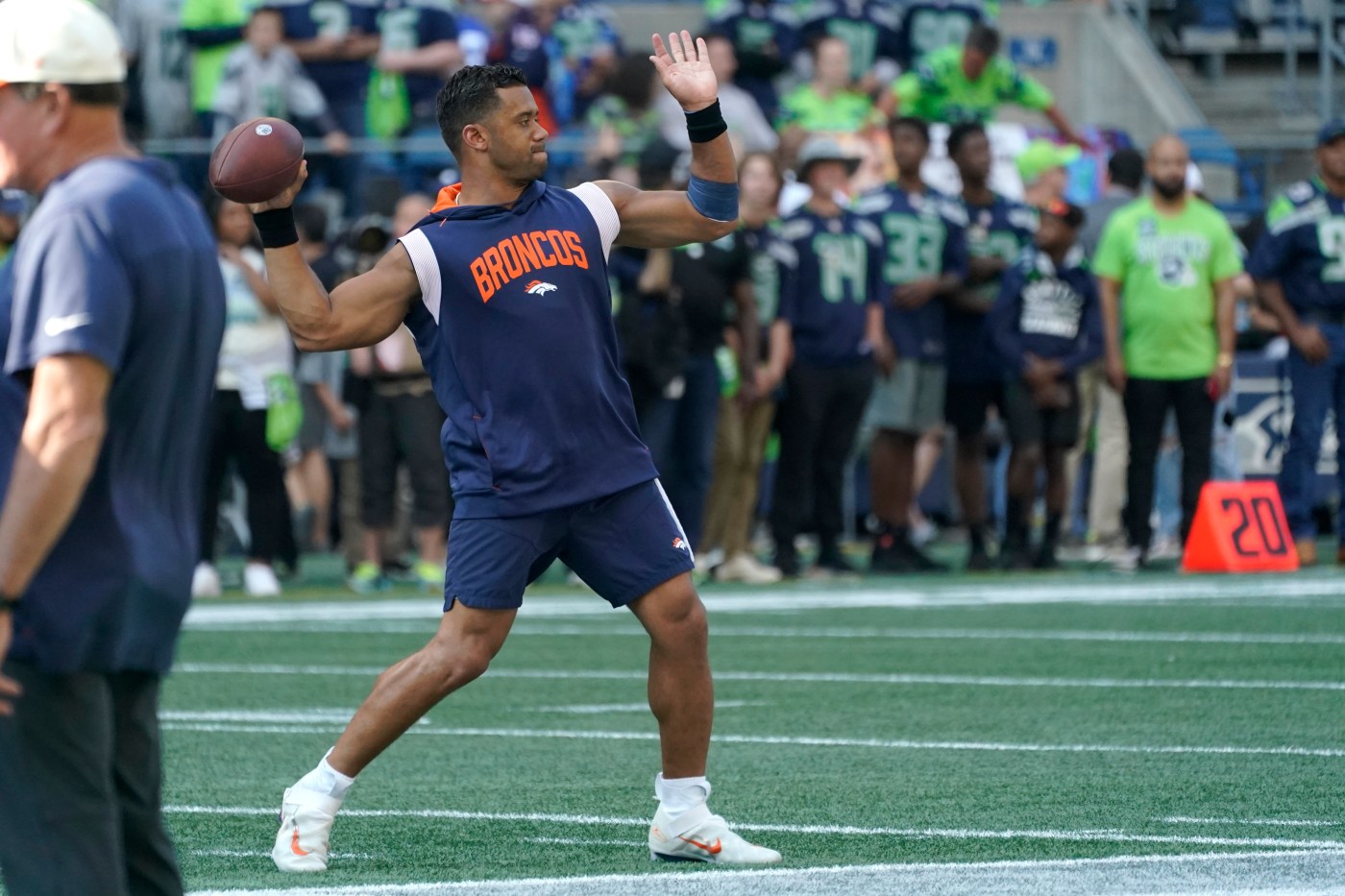 SEATTLE — A former Seahawks great was honored with a tribute video before Monday night’s game against the Broncos. His name was not Russell Wilson.

Linebacker K.J. Wright was greeted with a loud ovation as he raised the No. 12 flag in honor of the fans. Wilson, meanwhile, was consistently booed in his return to the stadium he called home for 10 years.

Trailed by 10 camera people, Wilson led the Broncos’ quarterbacks out of the tunnel about 55 minutes before kickoff. And was booed.

Wilson was debuting for the Broncos and returning to face the team he played for 10 years, including the 2013 Super Bowl-winning season.

Decked in a light green suit with a black bowtie, Wilson entered the stadium nearly four hours before kickoff. His first warm-up began around 2:45 p.m. local time as he threw his route tree to teammates while ESPN analyst Troy Aikman stood close by as an observer. Wilson also greeted former teammate Marshawn Lynch.

Throughout downtown Seattle on Monday, Wilson No. 3 Broncos jerseys were more prominent than his old No. 3 Seahawks jersey as his new fans took over the Pike Street Fish Market.

When Wilson led the Broncos’ offense onto the field, the boos returned.

Fleming gets nod. Right tackle Billy Turner (knee) was inactive and he did not play in the preseason after being activated from the physically unable to perform list on Aug. 15.

Cam Fleming, signed after camp started, started at right tackle instead of Calvin Anderson, who worked with the first team throughout the offseason program and into the latter part of training camp. Fleming committed a false start penalty on the Broncos’ opening possession.

Evero said he allowed himself during the past week to think about his journey to this point.

“I think that’s always part of it; you’re always reflecting,” he said. “The other day, (defensive line coach) Marcus (Dixon) popped into my office and we just started talking about (the past) because he was the assistant defensive line coach at the Rams last year and I was the secondary coach and we were reminiscing on last year, but also thinking about the opportunity we both have now. It’s cool to think about where we’ve come from, but more excited about where we’re going.”

It was the first time Glasgow played in a game he didn’t start since his rookie season with Detroit in 2016.

Footnotes. The Broncos have been installed as a 10 1/2-point favorite over Houston on Sunday. If it holds, it will be the fourth game of at least 10 points on the betting line at home since Peyton Manning retired. Last year, the Broncos won and covered against the New York Jets (minus-10, won 26-0) and Detroit (minus 12 1/2, won 38-10). … Randy Gregory (shoulder) started at outside linebacker in his Broncos debut. … Alex Singleton started for Jewell and handled the on-field communication. … Wilson’s first completion with the Broncos: Twenty-five yards to fullback Andrew Beck. … Rob Walton, Greg Penner and Carrie Walton-Penner from the Broncos’ ownership group attended the game.