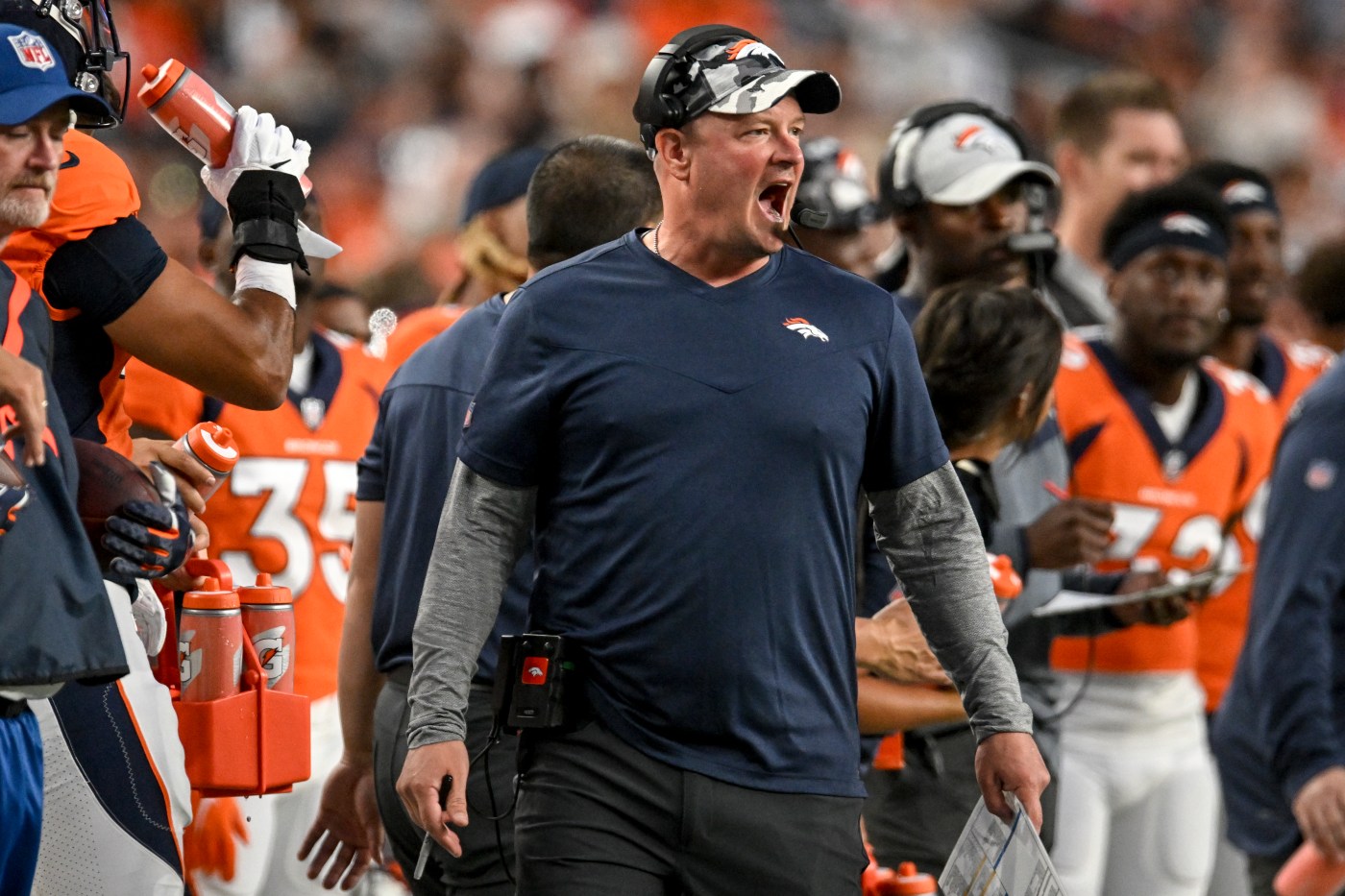 Forget about the Star Wars and pop culture references in his play calls and move away from the rah-rah and hugging for a moment.

At his core, new Broncos coach Nathaniel Hackett is about ball. Drawing up run blocks and pass routes. Creating mismatches for his players. Considering all ideas, knee-jerk or otherwise.

“He really doesn’t have a difficult time trying something new, looking beyond what he’s already doing,” said his father, Paul, who coached in college and the NFL for four decades. “He does that much better than his dad did. He’s not afraid to look outside. That really is a great trait.”

It may be the best trait Hackett brings to the Broncos as the club’s fourth coach since 2016, and one tasked with stopping a six-year playoff drought.

Hackett is about the juice, which the Broncos’ organization desperately craves. He is a walking B12 shot whether he’s in the hallways of the facility, in the auditorium addressing his players and staff, or on the practice field insisting he spot the football during the two-minute drill.

Broncos general manager George Paton went with the opposite of Vic Fangio when hiring his replacement. Hackett is 22 years younger than Fangio. He’s more extroverted. He calls the offensive plays as opposed to the defensive plays for Fangio.

Fangio is renowned as one of the NFL’s best defensive minds, but he could never figure out the Broncos’ quarterback situation. Hackett is recognized as one of the league’s bright offensive minds and he has Russell Wilson, acquired less than two months after Hackett first checked out his new office.

Hackett knows the deal, though. He needs to be the figurative compass to lead the Broncos out of a mess years in the making. And it may not be overnight, but the expectations are for significant progress from last year’s 7-10 record. Throughout the journey, he will have fun.

“He’s a different coach, especially (compared to) where I came from,” said defensive lineman D.J. Jones, who joined the Broncos from San Francisco. “I’m not bashing them at all, but it was to-the-book. There wasn’t any shooting (basketballs) during team meetings. He brings a sense of enjoyment.”

The Hackett Experience will only be enjoyable if the Broncos win, starting Monday night in Seattle.

Throughout training camp, when days are spent under an unforgiving sun and mornings and evenings are spent in cave-like meeting rooms, Paton noticed something interesting.

“Players, coaches, staff — everyone looks forward to going to meetings and I’ve never seen that anywhere I’ve been,” said Paton, who entered the NFL in 1997. “Usually, it’s head down, especially in the dog days of camp and people are like, ‘Oh, here we go again.’ But people are excited to sit down and see what’s going to happen.”

One such meeting was at the start of training camp when Hackett addressed a room of more than 125 players, coaches and support staff.

If it seems like Hackett is going above the speed limit, he is to a point. Behind closed doors?

“Just normal,” Paton said. “He has a lot of energy, but he can reel it in. He’s very genuine.”

Running backs coach Tyrone Wheatley has worked with Hackett in Buffalo, at Syracuse and in Jacksonville. During the offseason, Wheatley, who left his job as the head coach at Morgan State to reunite with Hackett, was asked how players respond to the non-stop enthusiasm and positivity.

“Here’s the deal,” Wheatley said. “If the energy is fake and overboard and if the energy does not give them a chance to advance their career, then the energy is just lost. Scientifically, they say energy can’t be lost, it can only be transferred, but with these young people, it is transferred only if they feel they are being developed and cared for. Nathaniel never, never, never harnessed his energy.”

Hackett’s bosses were fired after 2007 (Jon Gruden in Tampa Bay) and during the ’09 (Dick Jauron in Buffalo) season, and Doug Marrone resigned in Buffalo in ‘14, Hackett’s second year in his first NFL play-calling post. All three times, he was not retained.

In 2016, Hackett joined Jacksonville as the quarterbacks coach, responsible for developing Blake Bortles, the third overall pick. In their first season together, Bortles’ 35 touchdowns tied for second in the league and his 18 interceptions were the most.

“Outside of the guys who taught me how to play the game growing up, I owe everything to Nathaniel in how to play the NFL game and how to understand it,” Bortles said. “His ability to break things down and simplify them — he took the complexities of the schemes and defenses and explained them.”

Halfway through the 2016 season, Jaguars offensive coordinator Greg Olson was fired and Hackett was named the interim play-caller by coach Gus Bradley. With two games remaining, Bradley was turfed. Marrone was promoted to replace him and retained Hackett as coordinator.

The Jaguars reached the AFC title game in ’17 and Hackett was on the cusp of being considered for head-coaching openings. Just one more good year. Instead, he was fired in-season.

“I thought Nathaniel got a bad rap and was a scapegoat when he got fired,” said Pro Football Hall of Fame offensive tackle Tony Boselli, who is a part of the Jaguars’ radio team.

Hackett had to start the cycle over again. He was hired by Matt LaFleur to be Green Bay’s offensive coordinator, but did not call the plays. Working for/with LaFleur, he got the chance to be around quarterback Aaron Rodgers and was exposed to the inner workings of the offense popularized by the Mike Shanahan Coaching Tree.

“The shock of Jacksonville sort of centered him again to realize what this world and business is all about,” Paul Hackett said. “I give a lot of credit to (LaFleur). He gave Nathaniel a lot of responsibility and they worked together beautifully. There is no doubt that time made him a better (head-coaching candidate).”

In three years, the Packers went 39-10 and reached two NFC title games (both losses). LaFleur called the plays, but Hackett was responsible for leading the red zone installation meetings.

“I hadn’t been around him for three years and to see the knowledge he has continued to gain and how he had grown as a person and his ability to connect with anybody in the facility … he has always impressed me,” said Bortles, who spent two stints with the Packers last year.

Hackett was ready for his star turn and the Broncos hired him after a series of interviews.

Along the walls leading from the Broncos’ practice fields to their locker room are three large slogans in block letters.

“They hear it every day,” Paton said. “It’s emphasized in every practice and every meeting. It’s resonated with me and it rings in your ears. That’s the identity. That’s the culture Coach Hackett and his staff are preaching.”

They preach the team (protect each other, commit to a common goal), they focus on the football (keeping it and taking it) and they prioritize the west (the best way to the playoffs is winning the AFC West).

Until the Broncos can beat Kansas City (13 consecutive losses), the division title will be elusive. From 2000-19, the Broncos finished last twice; they finished last the last two years. To beat the Chiefs, Las Vegas and the Los Angeles Chargers, Hackett needs to lead an offensive awakening. During the playoff drought, the Broncos have finished 22nd, 27th, 24th, 28th, 28th and 23rd in scoring. They’ve been bad and boring, cycling through offensive coordinators (five in six years) and quarterbacks (same).

The perception of Hackett changed before he even led a practice when Wilson was acquired in March. If Hackett had designs on the offense he wanted to implement, that changed when Wilson arrived. This is going to be the Nathaniel Hackett-Russell Wilson Offensive System.

“My job is to be there for Russell Wilson — the end,” Hackett said. “Anytime you get around somebody brand new who loves football as much as Russell does and as much as I do, it’s intoxicating for everybody.”

The Broncos’ players are drinking up everything Hackett has to offer. Of course, they’re 0-0 and a subplot will be how Hackett handles criticism during times of inevitable adversity. But guys like safety Justin Simmons, receiver Courtland Sutton and left tackle Garett Bolles have never played in the postseason. Wilson’s words and actions carry enormous weight and he wants back in the Super Bowl for the first time in eight years. The players want to follow Hackett and feed off his optimistic nature.

“There is just so much buzz and excitement,” Simmons said. “I know every year I’ve talked about how excited I am for the season and how I really feel confident and comfortable with the group we have going in. But this year is just a little different.”

The Broncos’ Nathaniel Hackett will call the offensive plays in his first year as coach. A look at which head coaches are play-callers (offense unless noted):

*Note: In training camp, Detroit and the New York Giants had not declared if coaches Dan Campbell and Brian Daboll would be calling the offensive plays.