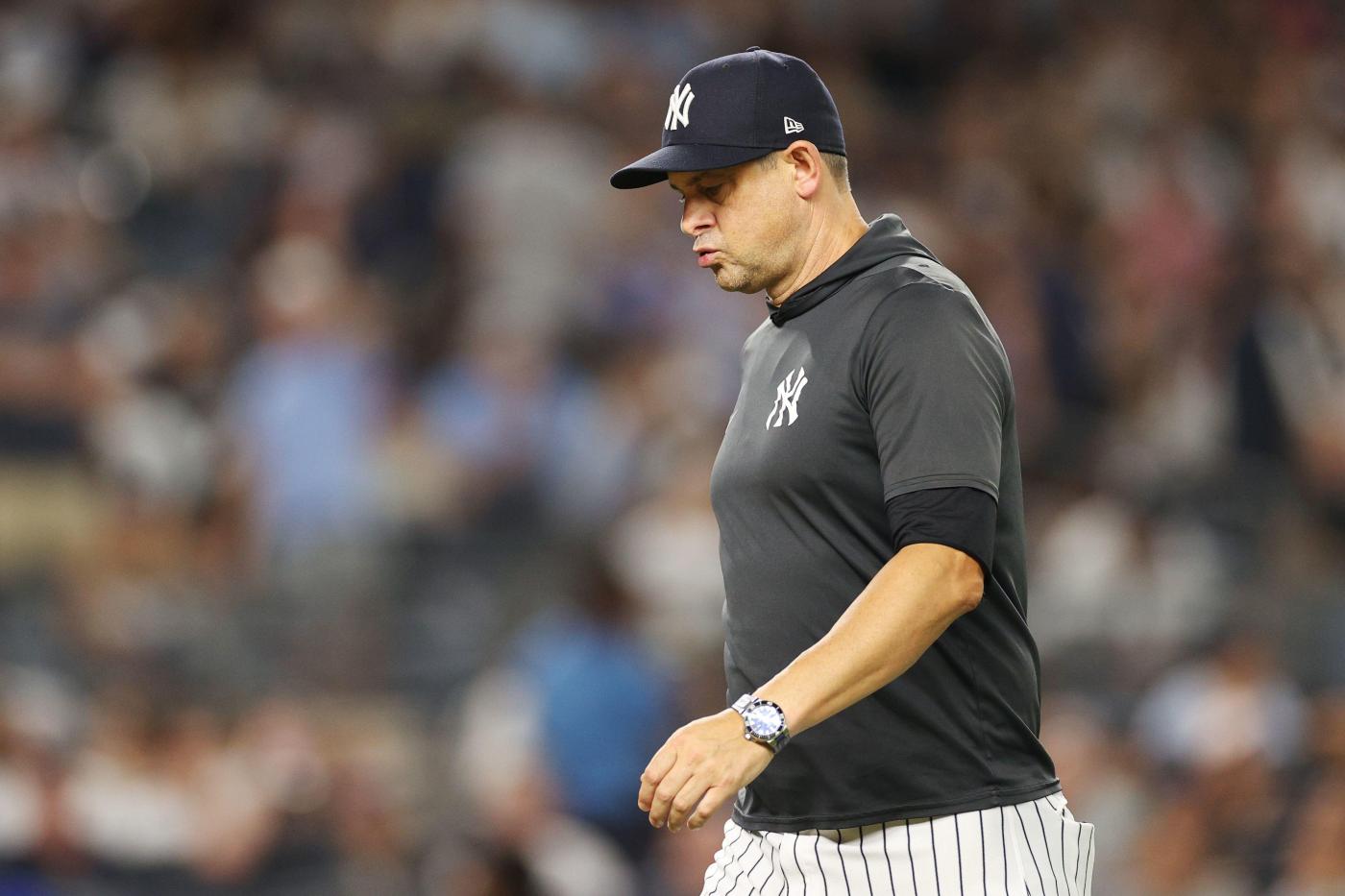 Amid their month-long slide, fans have booed owner Hal Steinbrenner, ripped GM Brian Cashman and chanted to have Aaron Boone fired. Monday, before the Yankees took on the Mets in the first game of the Subway Series at Yankee Stadium, Cashman gave Boone and his coaches a vote of confidence.

“Being a manager of the New York Yankees is a very difficult job. It’s made easier when everything’s perfect and obviously, but you’re playing an imperfect game right now on a daily basis,” the Yankees long-term GM said. “So, I think he’s done a great job. I think he manages the work extremely well. I think he knows his players extremely well. I think he manages obviously engagement, on a daily basis pre and post game, which I think is extremely difficult. You have to be a unique person to be able to handle that type of interaction, keep your cool and calm and on a consistent basis.

“He’s even-keeled. It’s important for our players to see that because if he can keep his temperament the same for the most part, they they don’t see panic … it doesn’t mean he can’t lose his cool, which he will from time to time when necessary, he has that gear you can turn to it, you’ve seen it,” Cashman continued. “I think his demeanor is vitally important. Especially in a market like this.”

The Yankees have lost five of their last 20 games and six straight series as they went into the final meeting with their crosstown rivals. The last month the offense that looked unstoppable in the first half of the season has slowed. Their run production, which was over five runs a game before the slide, has been just over three runs a game — thanks to three blowouts. They’ve been shut out four times in the last 12 games after being shut out just three times the first half. Their OPS has dropped from .755 overall to .679 over the last 30 games, tied for 10th in the American League.

The offensive inconsistency of the 2021 season is what caused the Yankees to let long-time hitting coaches Marcus Thames and PJ Pilittere go and replace them with hitting coordinator Dillon Lawson.

“I compliment them on the fact that they have good strong processes in place with each as a group and everything with each individual player profile. They are consistent and dedicated with how they go about their business and that has not changed,” Cashman said. “Now,  although the results here in the last 50 games have changed, but in terms of how they’ve gone about their business and how they’re still showing up on a daily basis with the mindset that today we’re going to be good and today we’re gonna go pound that opposing pitcher and it doesn’t matter who’s out on the mound, it’s the same you know temperament.”

The Yankees are 4-14 since the trade deadline when Cashman decided to use their pitching depth with Jordan Montgomery and in the minors to supplement the big league club by acquiring Frankie Montas, Lou Trivino, Scott Effross, Andrew Benintendi and Harrison Bader.

Cashman said it’s too early to evaluate his deadline moves.

“Right now, I’d say let’s just wait for that question to be answered when it’s all said and done,” Cashman said. “Let’s get through our season and see where we  finish as long as we’ve earned a spot in October and that has yet to happen .  So I’m not gonna Jinx ourselves by guaranteeing anything but once we are in October and see how we play in October, then I’ll be in a better position to answer for, or answer that question period. So it’s too early for me to deal with that.”

Giancarlo Stanton said he got through both of his rehab games pain free and he believes it is possible for him to be activated before the Yankees begin their four-game series in Oakland on Thursday. First, Stanton will face Luis Severino in a live batting practice on Tuesday.

Stanton said it was annoying that he could be out “grinding with the guys,” through this slide, but he is looking forward to being back in the lineup.

“I’m gonna just come to do what I’ve been doing all year,” Stanton said.  “So it’s trying to help us every day.”