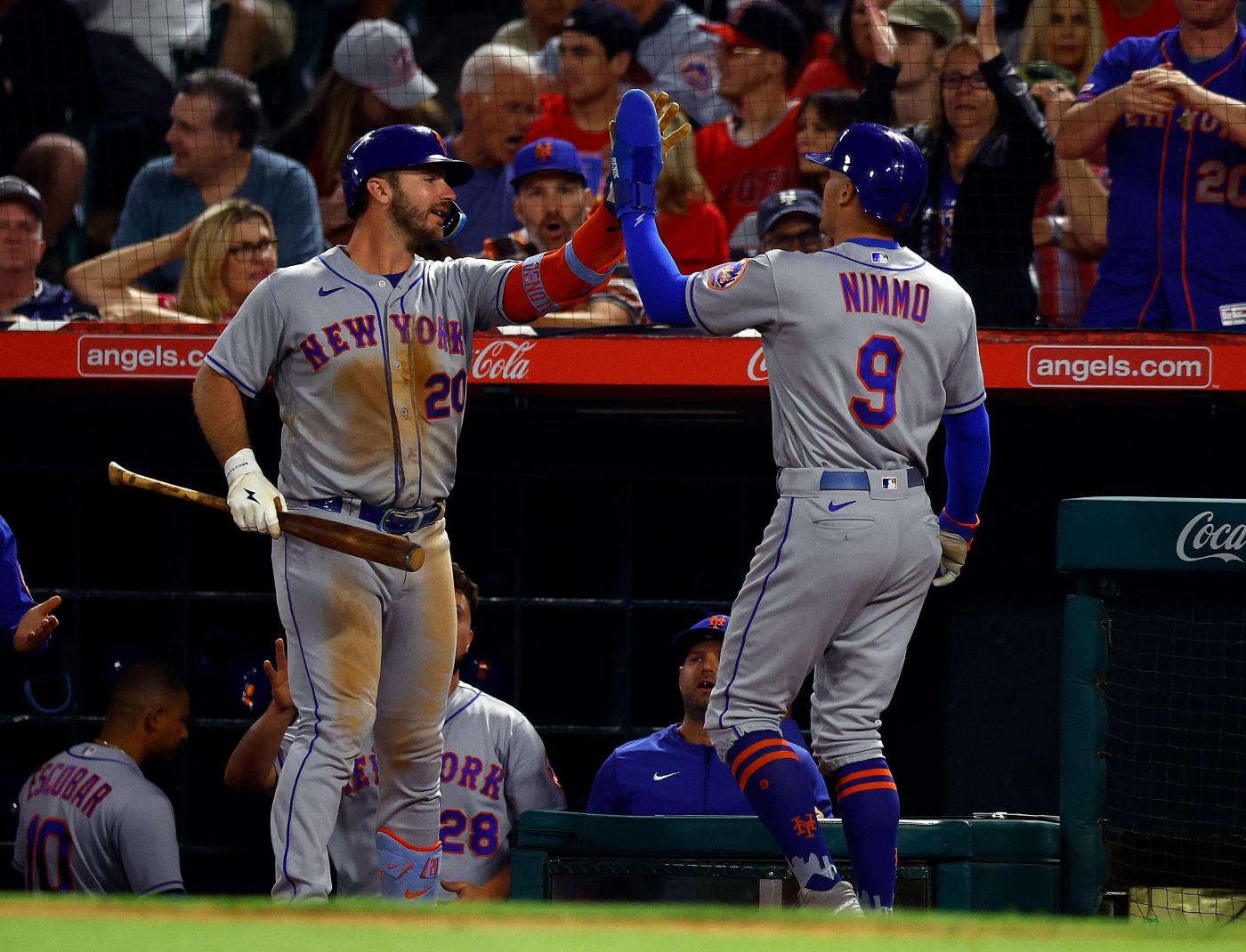 ANAHEIM – The offense was thumping, Tylor Megill was throwing high heat, and the good vibes returned to the Mets dugout as they snapped their two-game losing streak.

Brandon Nimmo and Mark Canha led the offensive effort, each posting three-RBI nights, in the Mets’ 7-3 win over the Angels in the series opener on Friday at Angels Stadium. Nimmo snapped his 37-game stretch without a home run by cranking a loud, 401-foot solo shot to center field in the fourth inning. It was his first time leaving the park since April 25 in St. Louis.

Nimmo had entered that fourth-inning at-bat hitting just .125 (3-for-24) with nine strikeouts and four hit-by-pitches on this west coast road trip, before finishing Friday night going 2-for-4 with a walk.

Megill’s first start back from the injured list was cut short due to a pitch limit, but the right-hander took a positive step forward in his ongoing journey back from right biceps tendinitis.

The 6-foot-7, 230-pound starter allowed two earned runs on five hits, including one home run, and registered four strikeouts while walking one in 3.1 innings and 64 pitches. The Mets’ Opening Day starter opened his first outing since May 11 with a shutout first inning. He did it while touching 99 mph on the radar gun.

After a shaky second inning – he coughed up a no doubt two-run home run to Brandon Marsh on a belt-high sinker – Megill bounced back for a shutdown inning in the third. Megill retired Shohei Ohtani in each of his two at-bats against him. And of the five hits Megill permitted, only two were hit with an exit velocity of 90 mph or harder.

David Peterson was well rested for his second outing of the season in relief. Since the Mets had an off day Thursday, Peterson’s outing was skipped but Buck Showalter made sure to keep the southpaw as close to his normal schedule as possible by throwing him behind Megill’s abbreviated start.

Peterson did a nice job shutting down the Angels in the fourth, with inherited runners on first and second, by inducing a double play and ending the inning unscathed. He limited the Halos to one run on three hits across 2.2 innings. He figures to remain in the rotation until one of Max Scherzer or Jacob deGrom returns to the starting five. Peterson’s only other time pitching out of the bullpen was during his 2022 debut, when he pitched behind Taijuan Walker who left with an injury on April 11 in Philly.