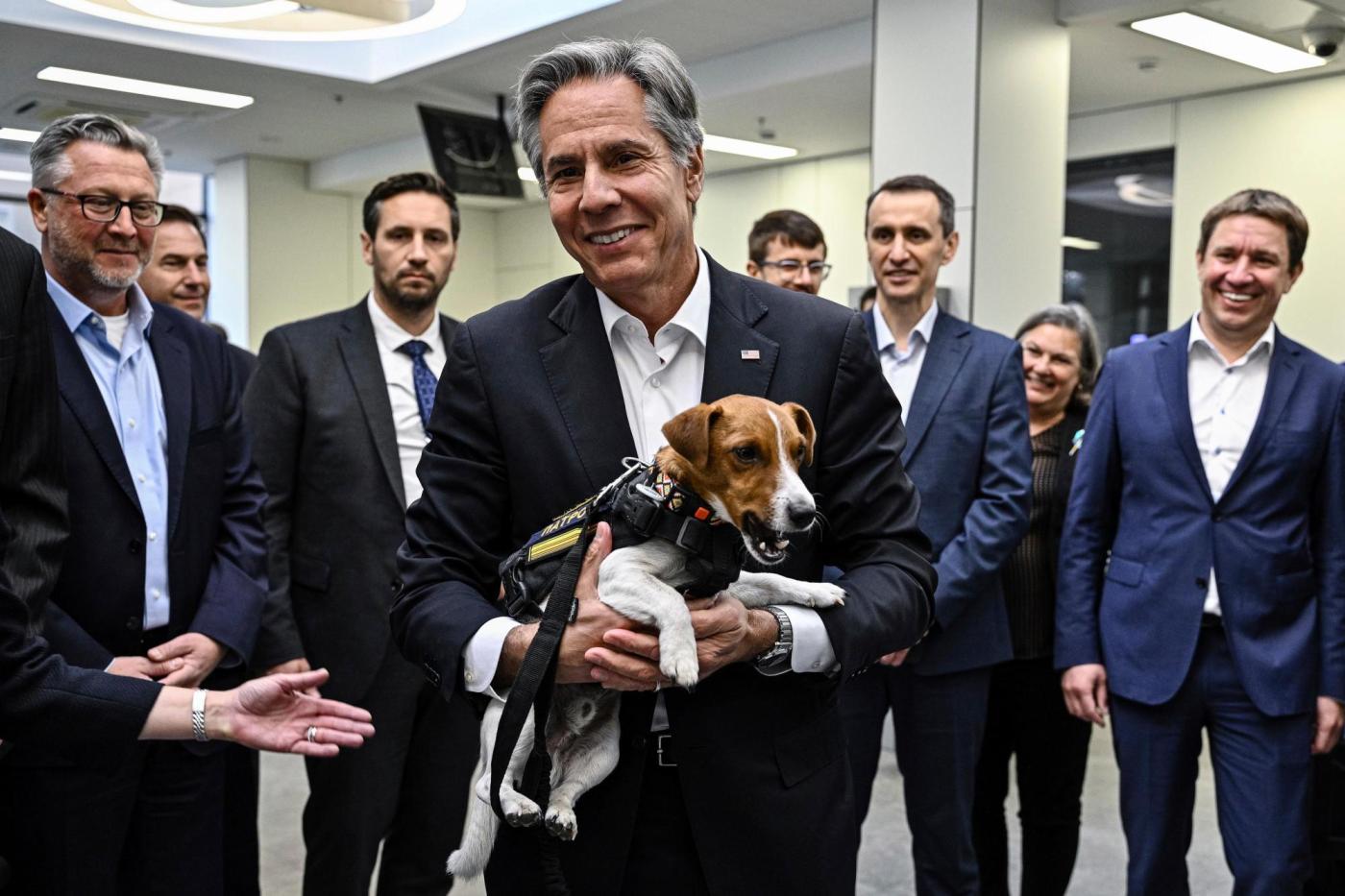 By MATTHEW LEE and KARL RITTER

KYIV, Ukraine (AP) — U.S. Secretary of State Antony Blinken paid an unannounced visit to Kyiv on Thursday as the Biden administration announced major new military aid worth more than $2.8 billion for Ukraine and other European countries threatened by Russia.

In meetings with senior Ukrainian officials, including President Volodymyr Zelenskyy, Blinken said the Biden administration had notified Congress of its intent to provide $2.2 billion in long-term military financing to Ukraine and 18 of its neighbors, including NATO members and regional security partners, that are “potentially at risk of future Russian aggression.”

“President (Joe) Biden has been clear we will support the people of Ukraine for as long as it takes,” Blinken said in a statement. “I reiterated this message to President Zelenskyy and his team today in Kyiv, which remains ̶ and will remain ̶ the capital of a sovereign, independent Ukraine.”

The Foreign Military Financing is on top of a separate $675 million package of heavy weaponry, ammunition and armored vehicles for Ukraine alone that Defense Secretary Lloyd Austin announced earlier Thursday at a conference in Ramstein, Germany.

It will help those countries “deter and defend against emergent threats to their sovereignty and territorial integrity” by enhancing their military integration with NATO and countering “Russian influence and aggression,” the department said.

“This assistance demonstrates yet again our unwavering commitment to Ukraine’s future as a democratic, sovereign, and independent state, as well as the security of allies and partners across the region,” it said.

The package announced by Austin includes howitzers, artillery munitions, Humvees, armored ambulances, anti-tank systems and more that is intended to assist Ukraine with its shorter-term needs as it presses a counteroffensive against Russian forces.

Austin said “the war is at another key moment.”

“Now we’re seeing the demonstrable success of our common efforts on the battlefield,” he said at a meeting of the Ukraine Defense Contact Group, which was attended by NATO Secretary-General Jens Stoltenberg and Ukraine’s defense minister as well as officials from allied countries.

Germany and the Netherlands will provide training in demining to Ukrainian soldiers as well as demining equipment, the countries’ defense ministers said on the sidelines of the meeting with Austin. The training will be carried out in Germany. The two countries previously joined forces to send howitzers to Ukraine.

“The capabilities we are delivering are carefully calibrated to make the most difference on the battlefield,” Blinken said.

Thursday’s contributions bring total U.S. aid to Ukraine to $15.2 billion since Biden took office. U.S. officials said the new commitments were intended to show that American support for the country in the face of Russia’s invasion remains firm.

The announcements came as fighting between Ukraine and Russia has intensified in recent days, with Ukrainian forces mounting a counteroffensive to retake Russian-held areas.

Ukrainian forces in the northeastern Kharkiv region have retaken portions of Russian-held territory there as a Ukrainian counteroffensive in the south has drained some of Moscow’s resources in the area, according to a report from the Washington-based think tank Institute for the Study of War.

Meanwhile, shelling continued near Ukraine’s Zaporizhzhia nuclear power plant, Europe’s largest, with the warring sides trading blame again amid dire warnings from the U.N. atomic watchdog, which has urged the creation of a safe zone to prevent a catastrophe.

On Wednesday, the U.S. accused Moscow of interrogating, detaining and forcibly deporting hundreds of thousands of Ukrainians to Russia. Russian officials rejected the claim as “fantasy.”

In Kyiv before meeting with Zelenskyy and Ukrainian Foreign Minister Dmytro Kuleba, Blinken visited the U.S. Embassy and then the National Specialized Children’s Hospital Ohmatdyt, where he saw boys and girls injured during Russian bombardments, including Maryna, a 6-year-old from the city of Kherson who lost a leg after a rocket struck her house.

In the hospital lobby, Blinken also met Patron, a Jack Russell terrier that has helped Ukraine’s military find more than 200 mines laid by Russian forces. Blinken kneeled down, petted the dog and presented him with treats, saying he was “world famous.”

In one ward, Blinken brought a basket of stuffed animals, which the children quickly dangled in front of Patron to get his attention.

Blinken told parents that “the spirit of your children sends a very strong message around the world.”