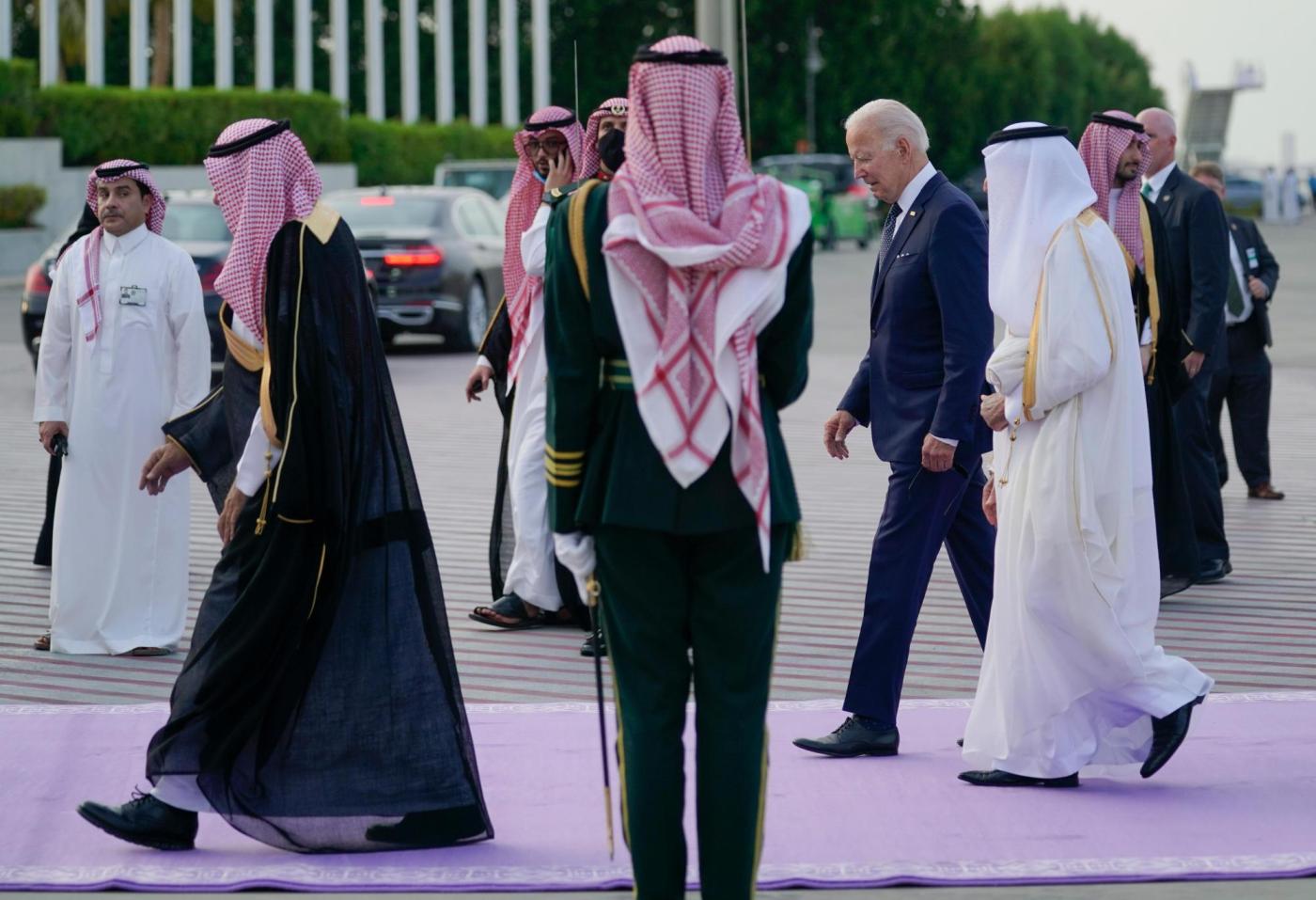 President Joe Biden, speaking at a summit of Arab leaders, said Saturday that the United States “will not walk away” from the Middle East as he tries to ensure stability in a volatile part of the world and boost the global flow of oil to reverse rising gas prices.

His remarks, delivered at the Gulf Cooperation Council on the final leg of a four-day Middle East tour, came amid concerns about Iran’s nuclear ambitions and support for militants in the region.

“We will not walk away and leave a vacuum to be filled by China, Russia or Iran,” Biden said. “We will seek to build on this moment with active, principled, American leadership.”

Although U.S. forces continue to target terrorists in the region and remain deployed at bases throughout the Middle East, Biden suggested he was turning a page after the U.S. invasions of Iraq and Afghanistan.

“Today, I’m proud to be able to say that the era of land wars in the region, wars that involved huge numbers of American forces, is not under way,” he said.

He announced $1 billion in U.S. aid to alleviate hunger in the region and he pressed his counterparts, many of whom lead repressive governments, to ensure human rights, including women’s rights, and allow their citizens to speak openly.

“The future will be won by the countries that unleash the full potential of their populations,” Biden said, and that includes allowing people to “question and criticize leaders without fear of reprisal.”

Crown Prince Mohammed bin Salman, the de facto ruler of Saudi Arabia, convened the summit, which gave him an opportunity to showcase his country’s heavyweight role in the Mideast. He also hinted that the kingdom could pump more oil than it is currently, something Biden is hoping to see when an existing production deal among OPEC+ member countries expires in September.

After a lunch with other leaders, Biden began his trip back to Washington, flashing a thumbs-up and waving to reporters as he boarded Air Force One.

Earlier, Biden met individually with the leaders of Iraq, Egypt and the United Arab Emirates, some of whom he had never sat down with since taking office in January 2021.

He invited Mohammed bin Zayed Al Nahyan, who became president of the UAE two months ago, to visit the White House this year.

Biden also met with King Abdullah II of Jordan. The White House later announced that the U.S. was extending and expanding financial assistance to the country, to no less than $1.45 billion per year.

The summit in the Red Sea port city of Jeddah was an opportunity for Biden to demonstrate his commitment to the region after spending most of his presidency focused on Russia’s invasion of Ukraine and China’s growing influence in Asia.

On Saturday, the White House released satellite imagery indicating that Russian officials visited Iran in June and July to see weapons-capable drones it is looking to acquire for use in Ukraine. The disclosure appeared aimed at drawing a connection between the war in Europe and Arab leaders’ own concerns about Iran.

So far, none of the countries represented at the summit has moved in lockstep with the U.S. to sanction Russia, a foreign policy priority for the Biden administration. If anything, the UAE has emerged as a sort of financial haven for Russian billionaires and their multimillion-dollar yachts. Egypt remains open to Russian tourists.

Biden’s attendance at the summit followed his Friday meeting with the Saudi crown prince, heir to the throne currently held by his father, King Salman.

The 79-year-old Biden had initially shunned the 36-year-old royal over human rights abuses, particularly the killing of U.S.-based writer Jamal Khashoggi, which U.S. intelligence officials believe was likely approved by the crown prince.

But Biden decided he needed to repair the long-standing relationship between the two countries to address rising gas prices and foster stability in the volatile region.

Biden and Prince Mohammed greeted each other with a fist bump, a gesture that was swiftly criticized by some lawmakers in the U.S. as well as the slain journalist’s fiancee. Biden later said he did not shy away from discussing Khashoggi’s killing when he and the crown prince met.

The topic created a “frosty” start to the discussion, according to a U.S. official familiar with the private conversations.

The atmosphere eventually became more relaxed, the official said, as they spoke about energy security, expanding high-speed internet access in the Middle East and other issues, according to the official, who spoke on condition of anonymity discuss a private meeting.

The Saudi-owned Al Arabiya news network, citing an unnamed Saudi source, reported that Prince Mohammed responded to Biden’s mention of Khashoggi by saying that attempts to impose a set of values can backfire. He also said the U.S. had committed mistakes at the Abu Ghraib prison in Iraq, where detainees were tortured, and pressed Biden on the killing of Palestinian American journalist Shireen Abu Akleh during a recent Israeli raid on the West Bank city of Jenin.

Meantime, there are sharp divisions on foreign policy among the nine Mideast heads of state who attended the summit.

For example, Saudi Arabia, Bahrain and the UAE are trying to isolate and squeeze Iran over its regional reach and proxies. Oman and Qatar have solid diplomatic ties with Iran and have acted as intermediaries for talks between Washington and Tehran.

Qatar recently hosted talks between U.S. and Iranian officials as they try to revive Iran’s nuclear accord. Iran not only shares a huge underwater gas field with Qatar in the Persian Gulf, it rushed to Qatar’s aid when Saudi Arabia, the UAE, Bahrain and Egypt cut off ties and imposed a yearslong embargo on Qatar that ended shortly before Biden took office.

Biden’s actions have frustrated some of the leaders. While the U.S. has played an important role in encouraging a monthslong cease-fire in Yemen, his decision to reverse a Trump-era move that had listed Yemen’s rebel Houthis as a terrorist group has outraged the Emirati and Saudi leadership.