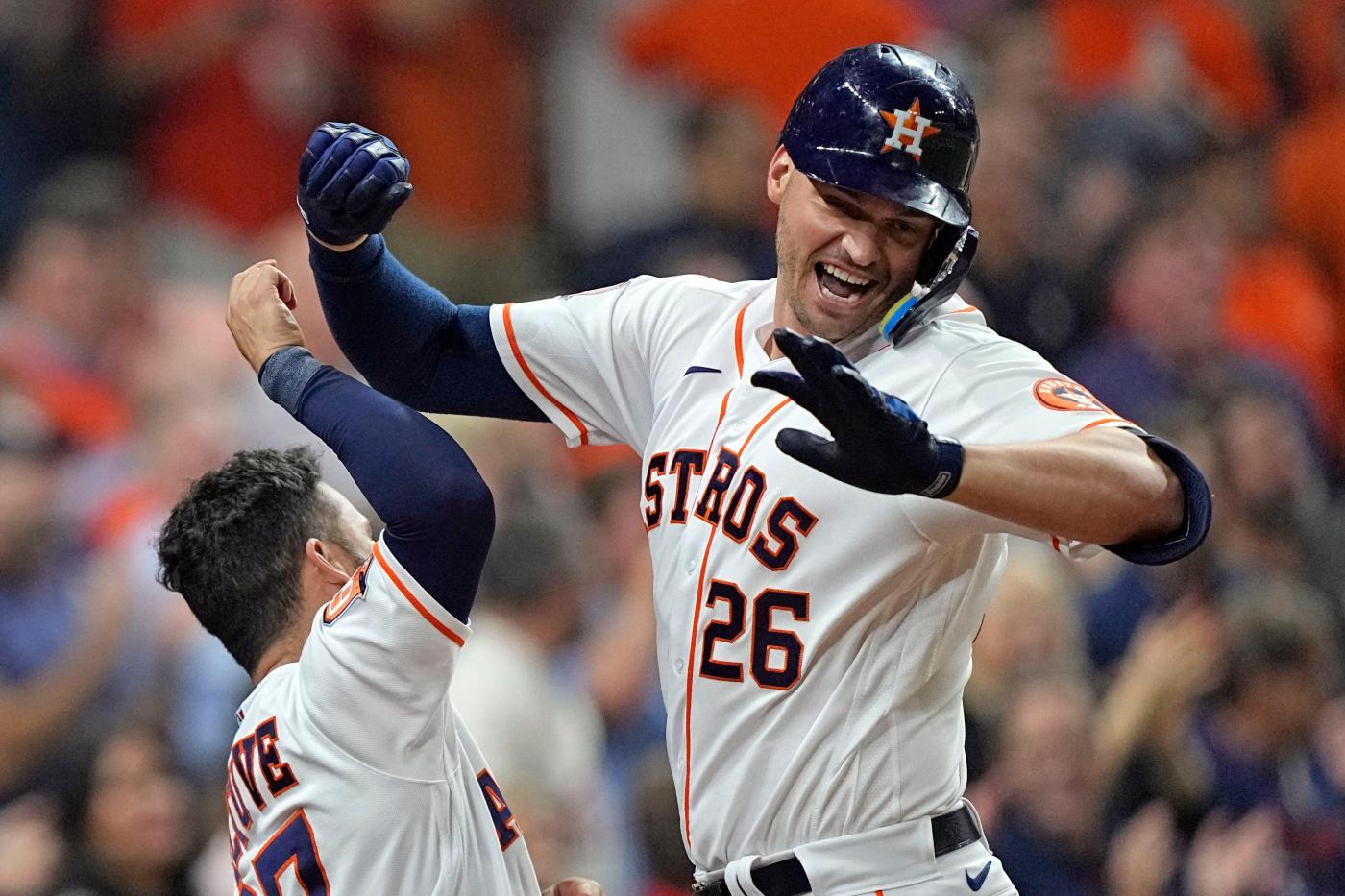 In a Zoom call that followed his decision to trade longest-tenured Oriole Trey Mancini to the Houston Astros, executive vice president and general manager Mike Elias ended his responses to four separate questions from reporters by referencing Mancini’s status as a potential free agent and the possibility that he could return to Baltimore this offseason.

On Friday, standing in front of his locker in the Astros’ Minute Maid Park clubhouse before facing his former team for the first time, Mancini said he would be open to having that conversation.

“Yeah, of course I am,” Mancini told The Baltimore Sun after meeting with assembled media. “Yeah, I’m open to anything.”

His focus, though, is on helping Houston, with the best record in the American League, continue its push to the postseason, having homered six times in his first 18 games with his new club. He said he hasn’t even allowed himself to imagine what the Astros’ late September visit to Camden Yards might be like.

“I’ll let future me worry about that in a month,” he said.

He’s taking the same approach to free agency, should it come. This spring, the Orioles and Mancini avoided arbitration with an agreement that included a $10 million mutual option for 2023. The deal and its $250,000 buyout both rest with Houston.

“I haven’t given any thought to free agency at all,” Mancini said. “That’s a bridge that I’ll cross when it gets there, but right now, there’s a lot to focus on here, so I don’t even want to get ahead of myself or think about that at all. I just want to be where my feet are right now and just try to help this team keep winning games.”

That includes this three-game series against Baltimore, which entered the weekend trailing the Seattle Mariners by 2 1/2 games for the AL’s third wild-card spot. The Orioles have gone 14-8 since the trade, with August representing their third straight winning month after not having once since August 2017 — Mancini’s rookie season.

After finishing third in AL Rookie of the Year voting that year, Mancini largely struggled in 2018 before breaking the next season, earning Most Valuable Oriole honors and narrowly missing an All-Star selection.

The next spring, Mancini felt sluggish before a routine blood test revealed low iron levels, eventually leading to a diagnosis of stage 3 colon cancer. After the trade, he credited the team’s training staff for “saving my life” for their help in the discovery.

He missed the 2020 season undergoing chemotherapy but returned in 2021 to earn several comeback player of the year honors and finish as the runner-up in the All-Star Home Run Derby, which he saw as an opportunity to show what could be achieved after a cancer diagnosis.

He was thankful the 2022 season was much more focused on baseball than what he endured off the field, but with that came continual conversations about his status as a trade candidate. Even with the option available, Mancini often noted how infrequently both sides pick up mutual options, effectively leaving him as a pending free agent.

Even with the Orioles ending July with a .500 record, that didn’t prevent Elias from sending Mancini to Houston in a three-team trade also involving the Tampa Bay Rays, getting pitching prospects Seth Johnson and Chayce McDermott in return.

“Either way, I think it would have been nice, no matter what, just to have that [trade deadine] date pass,” Mancini told The Sun. ” But sometimes, a change of scenery can be a good thing, and it kind of gives you a little jolt, adrenaline rush, to feel like a rookie again for a couple days, go to a new place and want to perform well for a new group of fans.

“I’ve really, really enjoyed my time here so far. Everybody has been really welcoming, and the guys on the team have been great. It’s a really fun group, and I’ve just really been enjoying myself.”

Mancini noted the trade has “worked out for both of us so far.” His absence has opened opportunities for Orioles prospects Kyle Stowers, who delivered a game-tying home run in the ninth inning Thursday, and Terrin Vavra, while Mancini has had success in a more offense-friendly environment.

Thanks largely to Camden Yards’ new left field arrangement featuring a deeper and taller left field wall, no player in baseball has a larger deficit between his expected and actual number of home runs, according to Baseball Savant, even as Mancini has been able to capitalize on the shallow Crawford Boxes at Minute Maid Park.

“I’m sure he’s liking that left field wall a little bit more than ours,” said Ryan Mountcastle, who split first base with Mancini before the trade. “He’s obviously been a huge leader in the clubhouse for us, and me and him both playing first, I got to pick his brain about stuff all the time. And he’s a great guy, great teammate. He’s meant a lot to us, and shame he had to go, but I wish nothing but the best for him.”

Mountcastle’s presence at first base and collection of other rising talents seemingly make a reunion with Mancini an unlikely fit from a baseball standpoint, even with Elias saying he expects Baltimore’s payroll to rise this offseason. Still, the Orioles’ collective appreciation for Mancini was clear during pregame batting practice, with several of his former teammates and coaches coming over to chat and give him a hug.

“He made a huge difference with this organization and turning it around and being a big part of the culture of this team right now,” outfielder Austin Hays said.

But that respect won’t stop them from trying to “do everything we can to get him out and make him have a tough night,” Hays said with a chuckle, with Mancini noting he’s not looking forward to facing Baltimore’s bullpen arms. Manager Brandon Hyde said he’s “always pulling for him except for these three days,” and Mancini echoed that feeling, saying it was good to see his friends, but he’s focused on helping the Astros beat them.

“He’s a very special part of the Orioles franchise,” said Elias, visiting his former organization as well this weekend in Houston. “It was an emotional thing trading him, but I think it was the right baseball move, and that’s why we did it, but I think for me, while I don’t want to see him go off on us this weekend when we’re trying to win these games, it means a lot for me that he’s in a team that’s such a good fit for him, and it’s a team that I know has good people on the staff and good players. It sounds like so far, it’s gone spectacularly, and I root for Trey every night.”