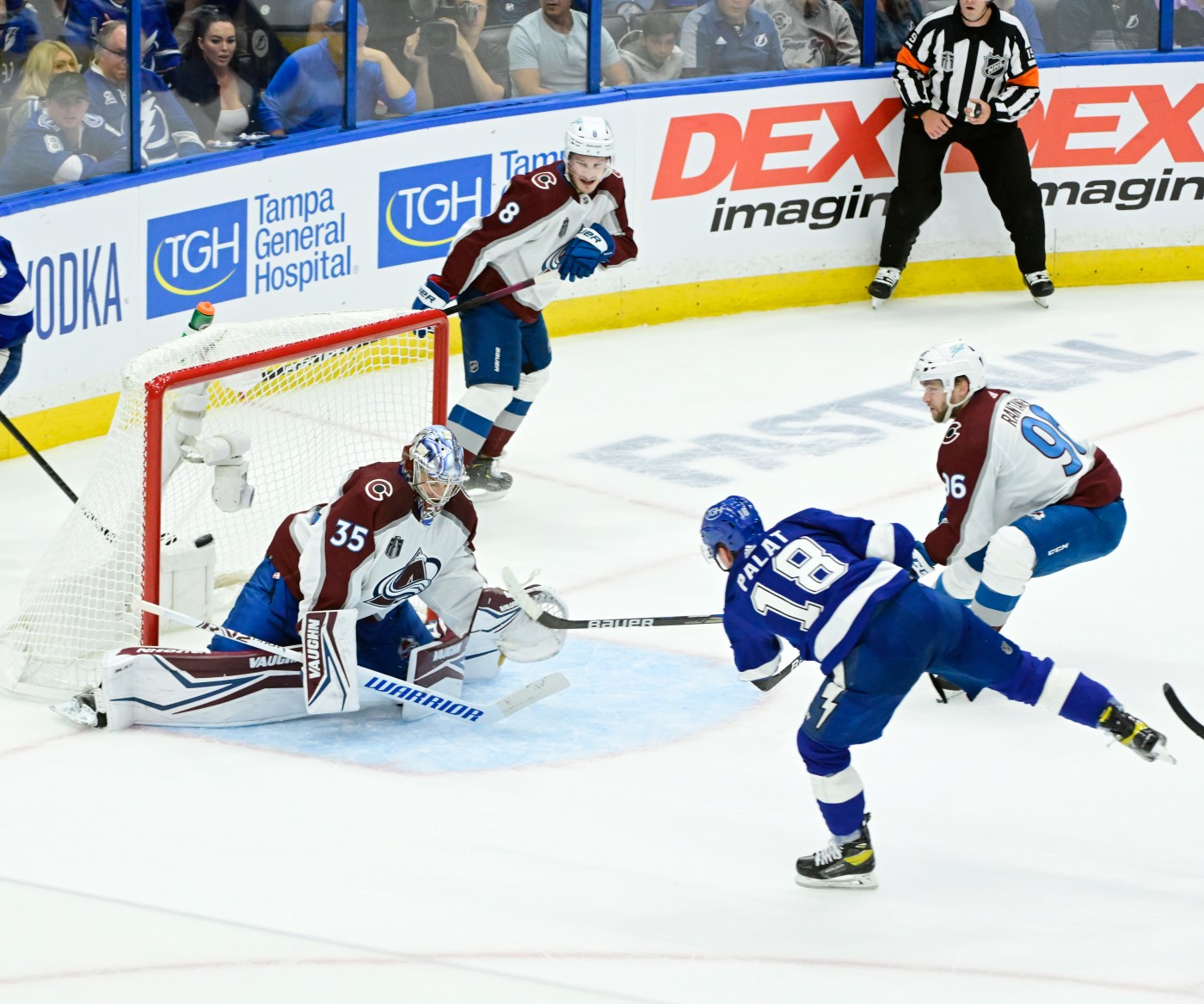 TAMPA – The Avalanche are back in a familiar situation this postseason: Have a series lead, but don’t have a lead goalie.

Squandering an opportunity to take command of the Stanley Cup Final against the Tampa Bay Lightning here Monday night, the Avalanche were sub-par in all three zones of the rink and goalie Darcy Kuemper was removed after allowing five goals on 22 shots of an eventual 6-2 Lightning win.

The good news: The Avalanche lead the series 2-1, two wins away from a championship.

The bad news: It may require a second goalie to get the Avs across the finish line. Again.

In sweeps over Nashville (first round) and Edmonton (third round), injuries to Kuemper required Pavel Francouz to play, but coach Jared Bednar pulled the plug on an apparently healthy Kuemper with 8:45 remaining in the second period.

Game 4 is back at Amalie Arena on Wednesday (6 p.m. Denver time) and the Lightning’s win means a Game 5 will be necessary Friday in Denver.

What will be necessary for the Avalanche in its Game 3 debrief: How the heck did its defending become so leaky? The Lightning had 26 shots — many of the danger-zone variety — through two periods in building a 6-2 lead and capitalized on bad decisions, bad passes and bad coverage by the Avs.

It would have been an exercise in tomfoolery to expect the Avalanche to match its near-perfect Game 2 performance. But aside from Landeskog, the Avs had too many passengers in the lineup.

The Avalanche, which lost on the road for the first time this postseason (7-1), scored first again, but held the lead for less than five minutes of the first period. Tampa Bay still isn’t quicker than the Avalanche, but was more effective in controlling possession and creating chances.

Befitting a championship-seasoned team with its collective backs against the end boards, Tampa Bay started with a push, but on his best back-to-back sequence of the series, Kuemper stopped Brandon Hagel and Corey Perry less than two minutes into the game. It would turn out to be the high point of his night.

The Avalanche scored first … twice. The first goal, a knuckleball by Valeri Nichushkin, was waved off after Tampa Bay coach Jon Cooper correctly challenged that the Avs’ Bo Byram did not keep the puck inside the zone.

The Avalanche’s second first goal counted. On the power play at 8:19 of the first, Mikko Rantanen’s shot from the right circle was saved, but as he was being cross-checked into the crease, Landeskog nudged the puck over the line.

The Lightning tied it five minutes later when Anthony Cirelli semi-fanned on his attempt, but the seeing-eye puck found its way past Kuemper. Might this have been the first sign of Darcy-related concern for Bednar? Kuemper appeared tentative on what to do against Cirelli (poke-check, cut down the angle, something else?).

Another fanned pass, this one by Avs defenseman Devon Toews, led to a Tampa Bay 2-1 lead when the Lightning streaked the other way, Ondrej Palat — off a feed from Steven Stamkos — going top-shelf to beat Kuemper. It was the Lightning’s first lead of the series.

Just 1:26 into the second, the Lightning made it 3-1 when Avs defenseman Josh Manson made a poor decision to reverse the puck in his zone … and right to the Bolts’ Ross Colton, who centered to Nick Paul for the goal.

The Lightning had true momentum for the first time in the series until its abysmal special teams re-surfaced. Colton was off for hooking and the Avalanche’s power play kept humming on Landeskog’s pin-point shot that beat Vasilevskiy to the blocker side. It was Landeskog’s fourth multi-goal career playoff game and second this postseason (two in Game 3 at Nashville).

The one-goal deficit was short-lived. A little over three minutes later, the Lightning’s Nikita Kucherov dug the puck off the wall and centered to Stamkos, who had his back to the goal, but had enough time thanks to shoddy Avalanche defending to spin around and beat Kuemper to the high glove side.

Pat Maroon made it 5-2 at 11:15 of the second period when he charged parallel along the goal-line and flipped a back-hander past Kuemper.

Bednar had seen enough and pulled Kuemper. A panic move? A justified move? An eye-toward-Game 4 move? Maybe all of the above. Down three goals, pulling the goalie isn’t a give-the-fellas-a-spark decision, but Bednar was chaffed by how Kuemper was playing.

New goalie, same result, though — at least early on.

The Lightning’s power play (gifted when the Avs’ Nico Sturm was called for delay of game) finally showed a pulse when Perry tapped home a rebound uncontested.