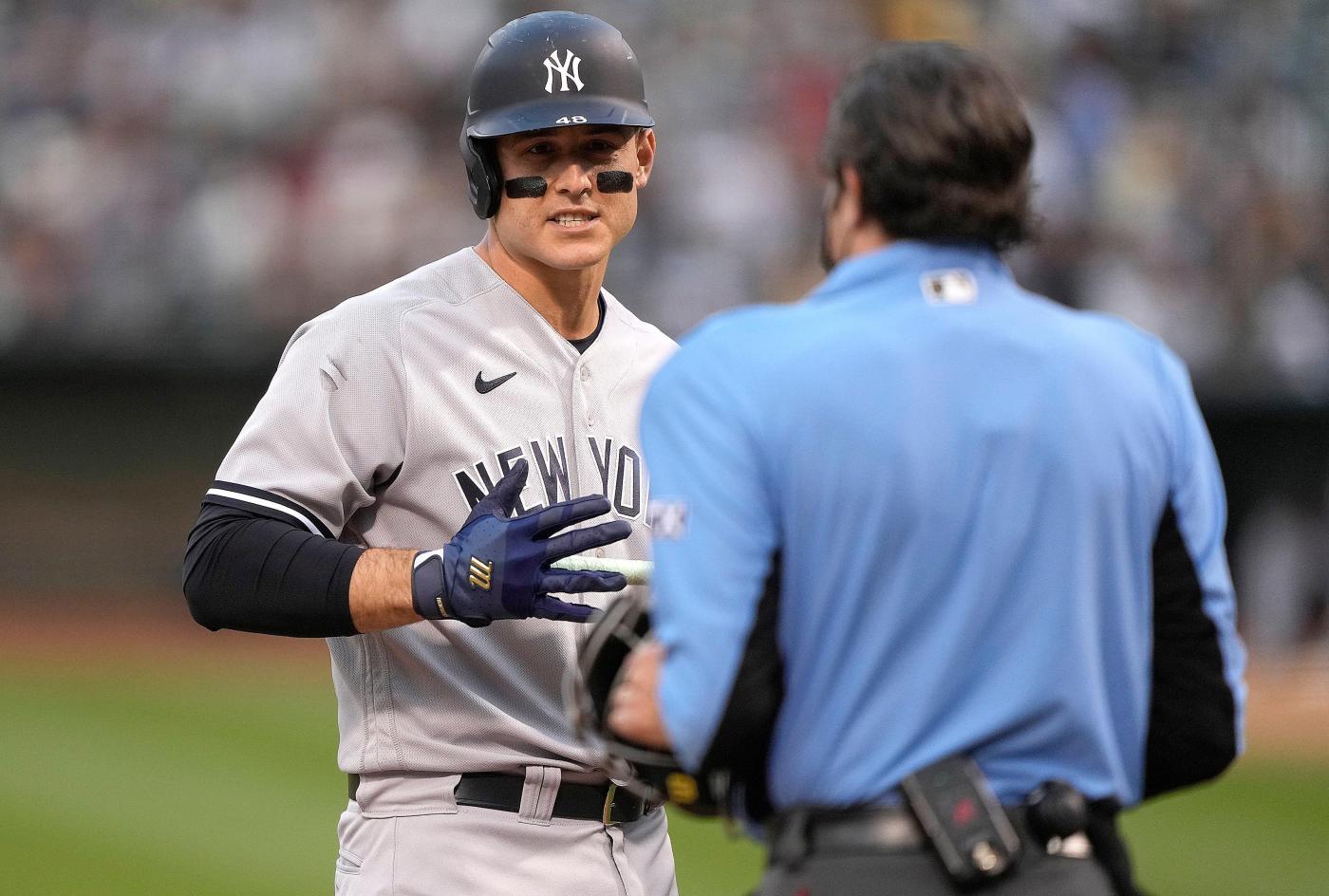 ANAHEIM — Anthony Rizzo joked before Monday night’s game he was “Shocked,” to find that he had been dropped down in the lineup. The struggling slugger was hitting sixth for the first time since 2013.

Monday he helped a struggling offense with his first home run since Aug. 17. Rizzo’s 29th of the season came in the Yankees 4-3 loss to the Angels.

“It was good to see Rizz get off tonight with a big homer,” Boone said. .

“Right now obviously  I’m not hitting them the way I’d like to be. There’s some bad ones but there’s just gotta keep grinding,” Rizzo said. “I got to compete and just work through going up there knowing I can compete and get that good feeling swing back.”

Nestor Cortes, who was placed on the injured list Thursday with a strained left groin, is hoping to get on the mound for the first time on Wednesday and throw a side session.

“If that goes well then he could potentially throw a live (batting practice) at the complex at Tampa on Saturday,” Boone said. “And if that were to go, well, then you’d get slotted back into the rotation on the homestand.”

Phil Nevin was appointed interim manager of the Angels shortly after Anaheim left the Bronx. So Aaron Boone has not had the chance to see in person and manage against his close friend and the Yankees’ former third base coach, yet. Monday night will be the first time they go head-to-head — and it will be a little strange.

“We can shake hands a little bit I think.”

Nevin was Boone’s third base coach from his hiring in 2018 until his contract was not renewed after last season along with hitting coaches Marcus Thames and PJ Pilittere and first base coach Reggie Willits.

Boone and Nevin have been friends much longer and it was a blow.

“It hurt, honestly,” Boone told reporters in October after he signed a contract extension with the Yankees. “Those are people that I love and care about a lot. But at the same time it’s also the nature of the business. There are tough decisions that have to be made. That’s a reality we have to face every year, some years they hit you a little harder…my relationships with those guys remain strong and I know they’ll land on their feet wherever the road ends up next in their baseball life, but the relationship I have with those guys will last forever.”

Nevin was hired by the Angels to be their third base coach and when Joe Maddon was fired June 7 — five days after they were in the Bronx — he took over as interim manager.

After Sunday’s 4-1 loss to the A’s, the Yankees optioned right-hander Luke Bard back to Triple-A Scranton. The Yankees needed to make room on the 26-man roster to activate Clay Holmes off the injured list.

Bard pitched a scoreless inning Sunday. Greg Weissert, the rookie who was the other candidate to be optioned, pitched two scoreless innings, striking out three on Sunday. It was a dramatic rebound from his major league debut on Thursday where he hit two batters with his first two pitches and had a balk in between. He recorded one out in that game and was responsible for three runs.

Boone admitted that Weissert’s performance on Sunday factored into the decision.

“We felt like Weissert was right now,” Boone said.