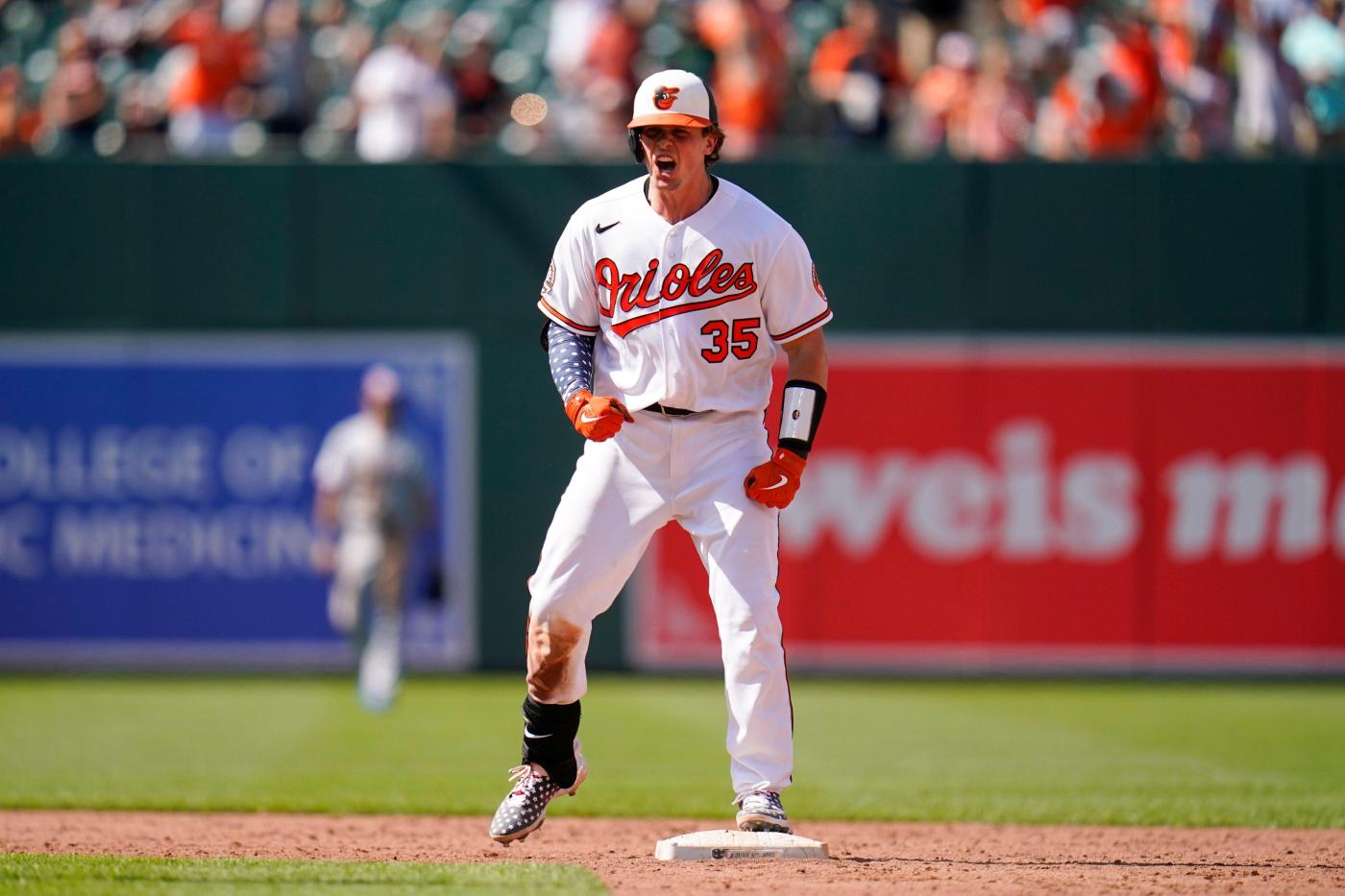 Moments earlier, as Jorge López made his way slowly off the mound, Adley Rutschman did what he always does. He waited for the Orioles right-hander, put his arm around him and helped him to the dugout after López allowed his third homer in the last four days.

Rutschman takes it upon himself to pick up his pitchers — to celebrate their highs and reduce their lows. López needed it in that moment, having allowed the Texas Rangers to take a one-run lead in the top of the ninth inning Monday.

But Rutschman went further than a pat on the back. With two outs in the bottom half of the frame, the catcher’s drive off the right field wall scored Ryan McKenna from first base. He not only picked up López, who desperately needed a break, he picked up the Orioles, forcing extra innings to make a walk-off hit by pitch possible to end the 7-6 victory.

In the bottom of the 10th, Rougned Odor’s bunt single led to an intentional walk of Ramón Urías. Then, left-hander Matt Moore plunked Jorge Mateo to drive home Austin Hays from third. All that madness was possible because of Rutschman’s swing an inning earlier, turning a third straight rough outing for López into a win.

The slump of López’s shoulders was the first sign that he knew. The ball off Rangers second baseman Marcus Semien’s bat — turning on an inside sinker — left the park in a hurry. Before López took the mound Friday against the Minnesota Twins, the right-handed closer had pitched 37 innings without allowing a home run. He had given up just three earned runs in that stretch.

And yet, the unraveling of López’s campaign began there, with a walk-off homer from Byron Buxton. The next day featured more of the same: two runs on four hits for another blown save.

López had Sunday off, but in a big spot Monday against Texas, entering with the game tied at 5, López served up another long ball as part of a befuddling stretch for the potential All-Star. Few relievers have been as dominant as López this season. That’s how he’s earned the closer role. But López’s form is concerning.

It wasn’t all down to him, of course. The Orioles were 2-for-11 with runners in scoring position Monday and are 7-for-54 in those situations over the last eight games. Right-hander Dean Kremer stumbled for the first time in four starts, building a hole Baltimore still found a way out of with the help of an error in the sixth inning.

Then came the 10th, when Mateo had help from Hays and Cedric Mullins to walk down the line after his walk-off plunking to the thigh.

All things must pass

Even for as well as Kremer had pitched up until the fifth inning Monday, the Orioles right-hander’s scoreless streak was impressive yet temporary.

When it did end, it collapsed in emphatic fashion. Kremer had gone 23 1/3 innings without giving up a run — a stretch that spanned four starts, including the beginning of Baltimore’s first July Fourth game at Camden Yards since 2008. But in a span of three batters, the Texas Rangers piled on five runs against Kremer, with the final blow the largest gut-punch of the bunch.

That last swing from Mitch Garver resulted in a three-run home run over the left field fence. When the dam broke for Kremer, the runs came flooding out.

Even with Monday’s stumble, Kremer’s return to the starting rotation has been largely successful. He brushed off a dismal 2021 in which he posted a 7.55 ERA before his demotion to Triple-A Norfolk. And while there were times manager Brandon Hyde felt Kremer was overly reliant on his cutter, that has faded away this year. Kremer entered Monday throwing his changeup nearly 10 percentage points higher than he did in 2021, according to Statcast.

The 26-year-old had allowed four runs in his first 32 innings before giving up five in the fifth inning Monday. It began with three singles before Adolis Garcia’s sacrifice fly to left field. Nathaniel Lowe added another run on an RBI single and Garver provided the big swing, with the ball leaving his bat at 105.4 mph.

That prompted a pitching change and the end of Kremer’s afternoon, with eight hits and five runs against him in 4 2/3 frames — ending his scoreless innings streak.

Urías admitted the wait was somewhat frustrating. He had never experienced an oblique injury before, so he figured he’d be back quickly. Instead, it took nearly a month for Urías to return to the field on a rehab assignment with Double-A Bowie last week before returning to the Orioles on Monday.

“It was frustrating, because you want to be there,” Urías said. “But what can you do? You just work on whatever you can work on.”

Urías said swinging the bat was the hardest hurdle to pass, but he was able to continue fielding practice and work in the weight room despite the oblique injury. In his two games in Bowie, Urías went 0-for-7 with one walk and three strikeouts.

To make room for Urías, infielder Richie Martin was optioned to Triple-A Norfolk. Martin had hit .167 in 13 games this year, and while he brings defensive versatility, Urías plays shortstop and third base, too.