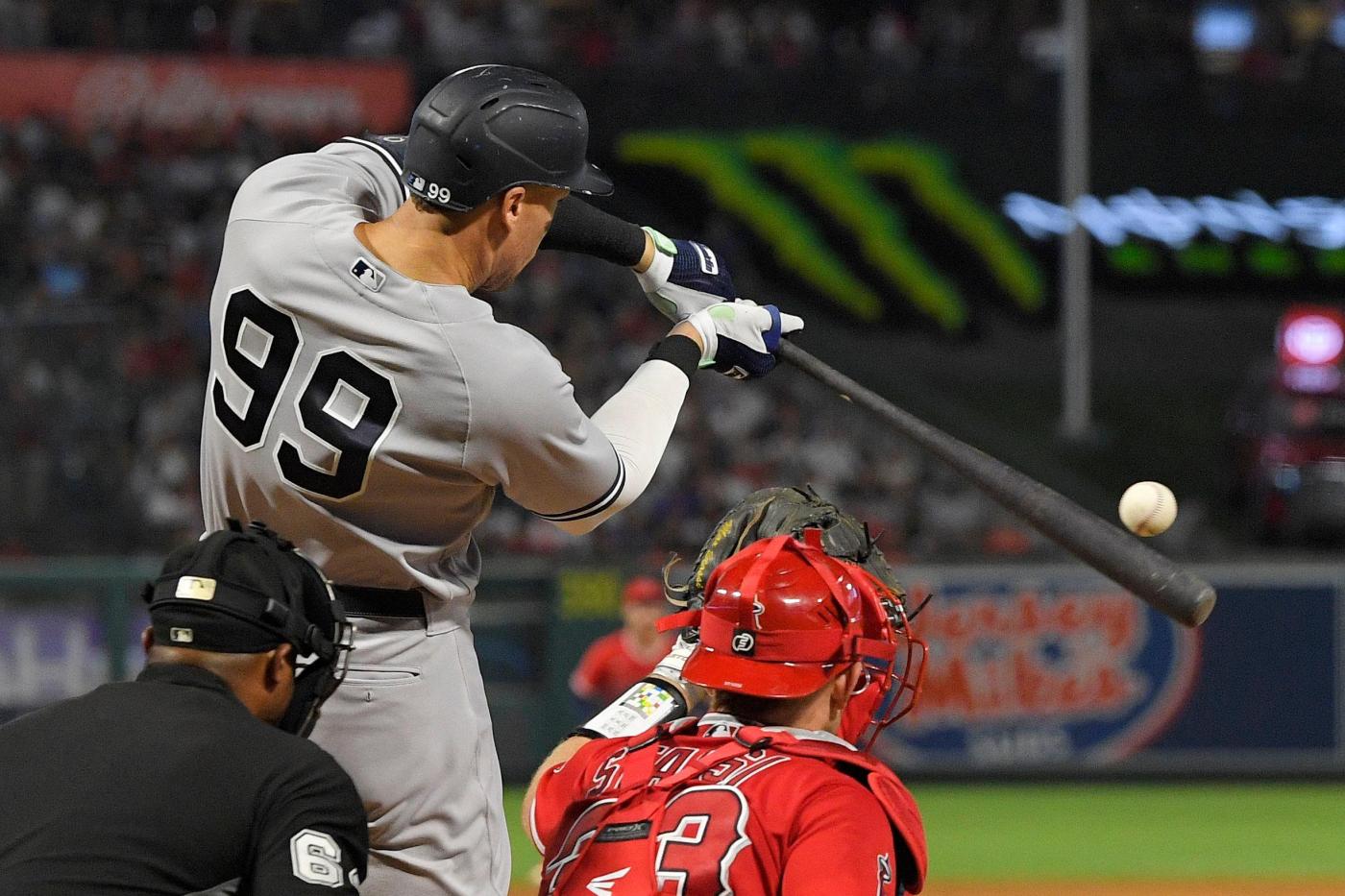 ANAHEIM — This is what the Yankees are built for. They aren’t constructed to rely on bunting and going station to station. The Bombers were built to hit blasts and Tuesday night, Athony Rizzo, Andrew Benintendi and Aaron Judge each went deep to beat up on the Angels, 7-4, at Angels Stadium.

The Yankees (79-51) snapped a three-game losing streak and gave themselves a chance to salvage their final trip to the West Coast this season after splitting a four-game series with the lowly A’s. The Yankees are 10-17 in the month of August and 15-23 since the All-Star break. They held onto their seven-game lead over the Rays in the American League East. The Angels (56-72) lost for the first time in five games.

Judge homered for the second time in as many nights, giving him a major-league leading 51 home runs. That is 10 shy of the Yankees’ franchise and American League record set by Roger Maris in 1961. Judge has 32 games left to play in the regular season.

Judge’s number is also 21 shy of the MLB record set by Barry Bonds, which many baseball fans consider tainted because of his connection to PED scandals.

Judge has hit home runs in both games here against the Angels, becoming just the 10th man in baseball history to reach the 50-home run mark twice in his career on Monday night with his eighth-inning shot. Judge hit 52 in his rookie season of 2017. There are only 47 50-home run seasons in major league history. It was the 10th 50-home run season for the Yankees with Babe Ruth’s four, Mickey Mantle’s two, Maris’ historic season of 1961 and Alex Rodriguez doing it once along with Judge doing it twice.

“I just think the process he takes every single day is the special thing about him. His routine, getting to watch him every day, talk to him, he’s just so sound. So fundamentally sound,” Rizzo said. “That’s the most enjoyable part but the results are amazing, but just the way he goes about it is even better.”

But Judge was not the only one adding lines to the resume Tuesday night.

Rizzo hit his second in as many nights for his 30th of the season. It’s the fifth time in his career that Rizzo has reached the 30-home run mark.

“I just think that our goal in the beginning of spring is to win the division and put ourselves in a good position going into the playoffs. We’re entering September here with a lead in the division.  That’s the main goal,” Rizzo said. “So personally, I just want to have good at-bats and be complimentary in this lineup, a very deep lineup.”

Benintendi actually got the Yankees started Tuesday night. The lefty hit his fifth of the season in the first inning. All three Yankees homers came off Angels’ right-handed starter Mike Mayers.

The Yankees lead the majors with 205 home runs and they are 45-12 this season when they hit one or more homers. They are 11-23 when they go without a homer. In the last 30 games, however, the Yankees had suffered a power outage with 28 homers, 14th in the big leagues. Their slugging percentage was just .353 (27th) and their OPS was just .651 (26th) over that stretch.

The long ball can cover up a lot of the issues that have been plaguing the Yankees lately. Tuesday night, it was enough to help the Bombers get past the early exit of starter Jameson Taillon. The right-hander was hit on the right arm by a line drive off the bat of Magneuris Sierra. The ball turned into and out before Taillon walked off the mound and immediately down the tunnel to the clubhouse after just two innings of work.

The Yankees said Taillon had a “right forearm contusion” — with X-rays coming back negative — which is encouraging, but that left the Bombers’ bullpen with seven innings to cover.

Greg Weissert, who had a disastrous debut on Thursday night, continued to show why the Yankees were excited about him. In his third major league game, the right-hander out of Fordham University pitched two perfect innings, striking out two. That included getting outs against reigning AL MVP Shohei Ohtani and former AL MVP Mike Trout.

Lucas Luetge gave up his first home run to a lefty this season in the fifth when former Yankee Mike Ford homered for the second night in a row. Ron Marinaccio gave the Yankees 1.1 scoreless innings and Jonathan Loaisiga struck out the side in the eighth and got Trout in the ninth. Wandy Peralta closed it out after giving up a double to Ohtani and a two-out RBI-single to Taylor Ward.

It wasn’t all blasts on Tuesday. The Yankees also took advantage of a big Angels’ mistake. In the third inning, DJ LeMahieu walked and Judge had a one-out single. Rizzo walked to load the bases and Josh Donaldson grounded into what looked like and inning-ending play at third. Instead, Luis Rengifo’s throw to first bounced and got past Ford to allow LeMahieu and Judge to score.

“Or, not a break,” Taillon added with a laugh.