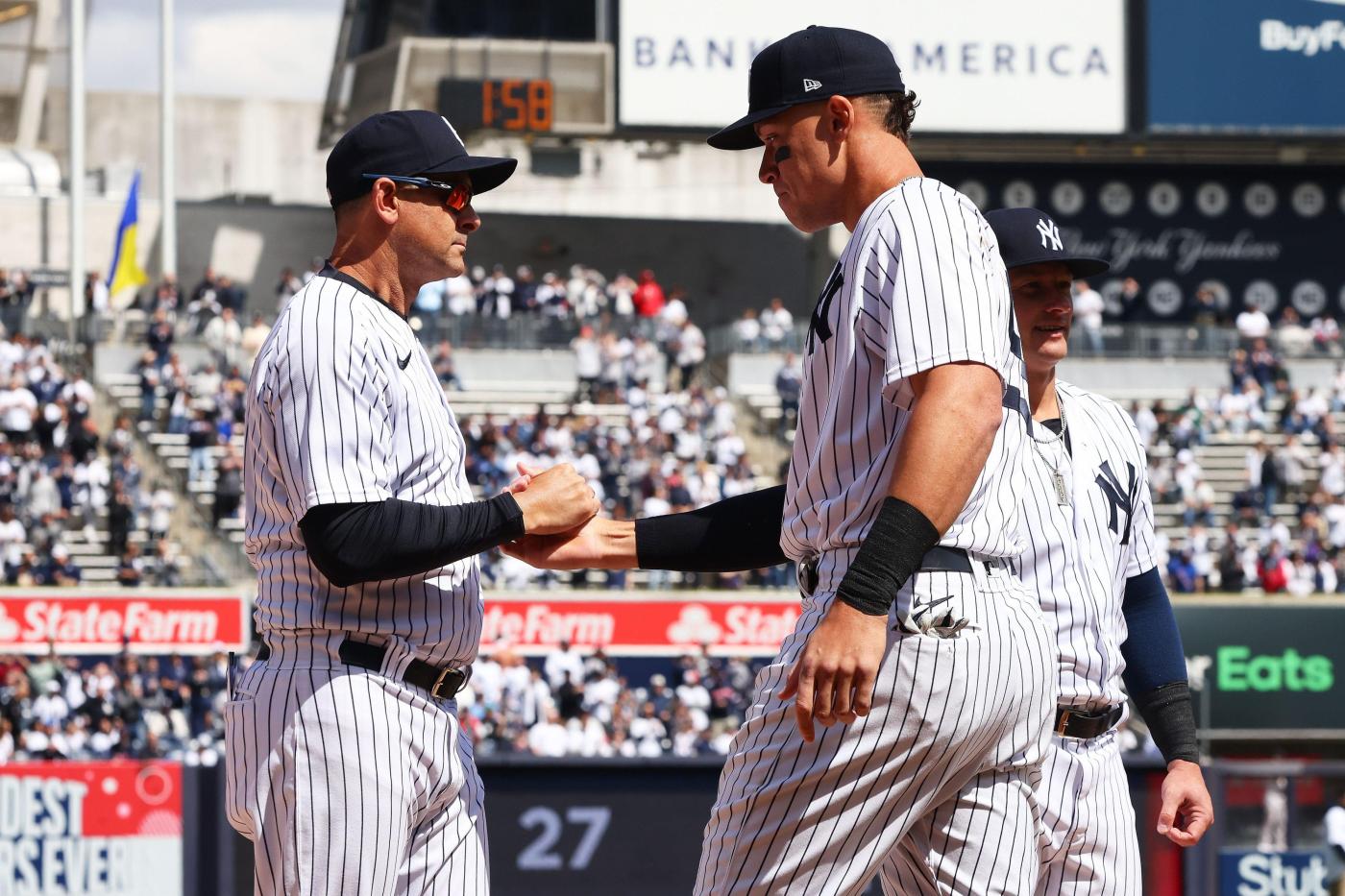 To the surprise of nobody at all, Aaron Boone is happy that his best player came to a salary agreement without needing an arbitration hearing.

“I’m pleased,” Boone grinned in Friday’s pregame press conference. “Getting that news today, yeah I was excited about it. I’m excited that that’s behind us. We can leave that portion of the show alone.”

Judge agreed to a $19 million salary with the Yankees prior to his scheduled arbitration hearing at noon on Friday. The contract dispute, which lingered into the final year of Judge’s contract, certainly hasn’t affected the big man between the lines. Judge has been the American League’s most dominant force, and if he continues lighting everything on fire, he’ll grab a $250,000 bonus for winning the league’s MVP.

Boone was asked if he’s been surprised at how easily Judge can compartmentalize, separating the financial side of his job from the baseball side.

“If you just dropped me in and I didn’t know him, or the situation, maybe,” Boone said. “But that’s who he is. I actually think it’s easy for him to separate. It’s why he’s so revered in there. He’s about winning and understands there’s a business side to this. But when he comes in and puts his uniform on, it’s about winning. That’s where his focus begins and ends.”

Winning has not been an issue for the Yankees, something that Boone says is connected to Judge’s nature in the clubhouse. But now that the saga — which began on Opening Day when Brian Cashman announced that Judge had turned down the club’s $213.5 million extension — is over, the Yankees have one less thing to worry about in their pursuit of Major League Baseball’s all-time wins record.

“I’m excited that we’re through this and there’s an agreement,” the skipper repeated. “But no matter what happened, I don’t think that would have changed the focus and the mission of the group.”

Aroldis Chapman began his rehab assignment on Friday, reporting to the Somerset Patriots in Double-A. The reliever has not pitched since May 22 thanks to a nagging Achilles heel. In his absence, Clay Holmes reached a level that even Mariano Rivera never did, as Holmes broke Rviera’s franchise record for consecutive scoreless outings.

Nobody is more aware of Holmes’ ridiculousness than his manager, who is amused by the idea that getting Chapman back will disrupt things at the end of games.

“I kind of laugh at the continued questions about Chappy and Holmes,” Boone said. “I’m excited about getting Chappy back healthy. We’ve been dinged up back there. It’s just going to make us better. Clay Holmes has become an absolute beast, hopefully Chappy is healthy and can give us another guy to really help shorten the game with.”

Boone said he does not feel the need to define a true closer when Chapman returns, saying it will be about matchups.

Friday’s fixture at Yankee Stadium brought a scintillating matchup to the pitching mound. For the Yankees, Luis Severino. For the Astros, Justin Verlander, who has rebounded to yet again be one of the game’s best pitchers.

“It hasn’t been a ‘Let’s see how it goes,’” Boone said, referring to the idea that this was supposed to be a feel it out year for Verlander. “It’s been Verlander. [He’s a] Hall of Famer, and he’s still pitching at that level. I could say we’re surprised, but not really. I know our interest level in the offseason. He’s gone out and pitched like an ace for them.”

Boone also spoke about Severino and the journey he’s had after Tommy John surgery, which gave him a new perspective on being a Yankee.

“I feel like — missing time the last couple years, having little setbacks, and getting back in the bullpen at the end of the year — there’s an added appreciation. He appreciates the opportunity to go out there and compete. He’s still a beast.

HICKS TURNING IT ON

After a walk and a three-run home run in the ninth inning of Thursday’s game, Aaron Hicks woke up on Friday with a .300 average in the month of June. Boone can feel the switch hitter approaching the level he was at in 2018, when he put together an .833 OPS.

“This month I feel like he’s slowly but surely started to get some results. He’s worked really hard. He’s done so much extra work and extra hitting to get himself in this position. The whole time, he’s been getting on base a little bit, so that’s a saving grace. Hopefully that’s something that he can continue to do. When he’s going like he’s capable of, he’s a difference maker.”