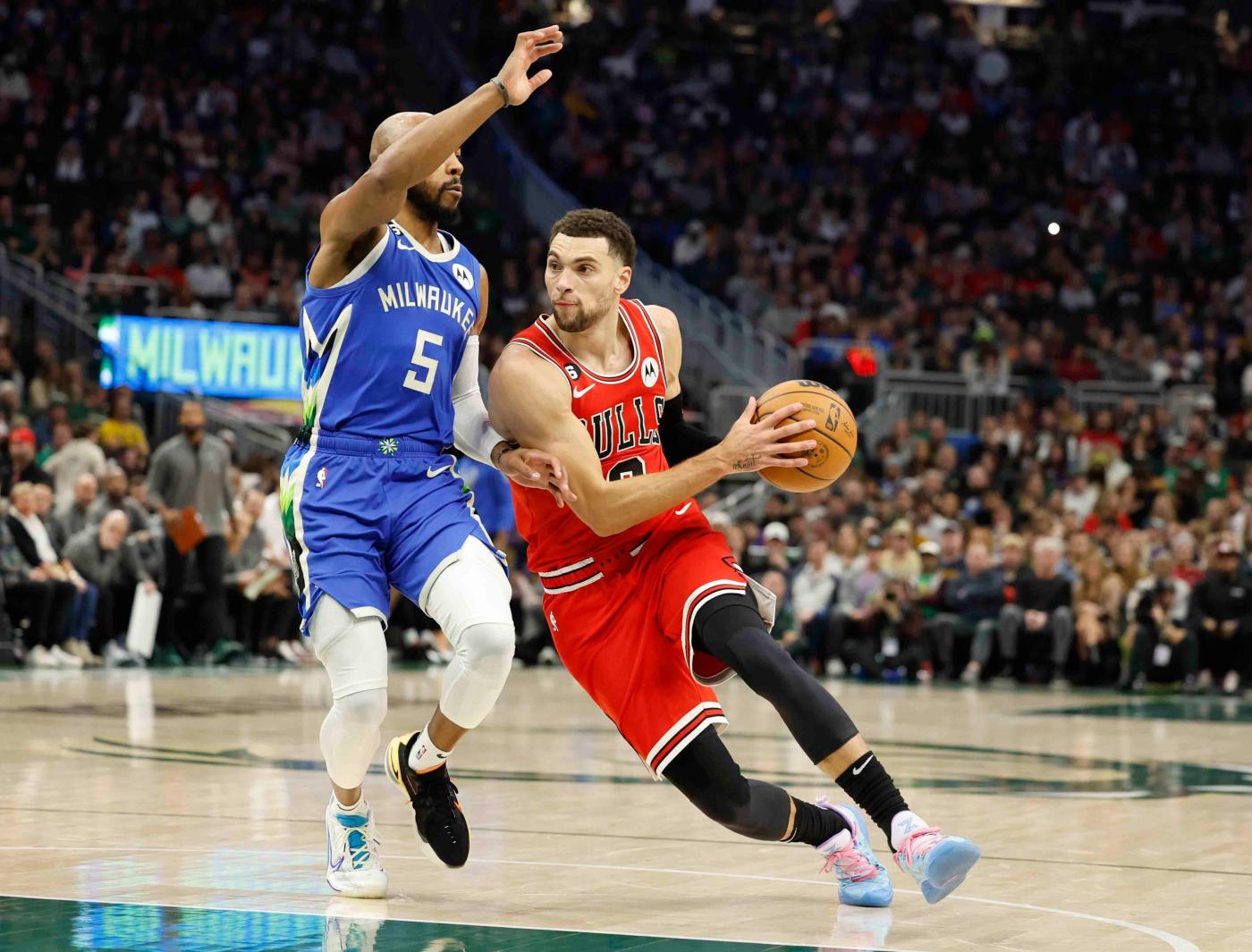 The Chicago Bulls opened their six-game trip Wednesday with a 118-113 win over the Milwaukee Bucks at Fiserv Forum, fueled by DeMar DeRozan’s 36 points and two huge 3-pointers down the stretch from Coby White.

With back-to-back wins over the Boston Celtics and Bucks, the Bulls (8-10) showed they have the talent to compete with the best teams in the league despite their lackluster start to the season. But the toughest stretch of the season is on tap, and they have to continue to play aggressively to avoid a letdown.

The Bulls were 0-7 in “clutch” games, defined as those with a five-point margin and five minutes or fewer remaining. With a 10-point lead and 10 minutes remaining, the Bulls were in control until Bucks star Giannis Antetokounmpo began to assert himself in the paint, scoring 17 points in the fourth quarter to give the Bucks a late lead.

But a White 3-pointer tied the game with 1 minute, 15 seconds left, and after Alex Caruso coaxed Antetokounmpo into a charge, White nailed another 3 to put the Bulls back in front. Defensive consistency was key to holding off the Bucks.

“We’ve been pulling together defensive stops for longer stretches in games, and it shows,” DeRozan told NBC Sports Chicago on the postgame show. “We’ve got to do that, especially competing against the good teams in this league.”

The win over the Bucks was also important for the team’s confidence. They had lost 17 of their last 19 against Milwaukee since 2018-19, including last year’s loss in five games in the first round of the playoffs. With a large contingent of Bulls fans making the trip up I-94, it sounded like a home game at times.

With Goran Dragić out with left shoulder pain, White got extended minutes off the bench and made them count.

“I tell him all the time, if he misses one, two. three, whatever, keep shooting,” DeRozan told reporters afterward. “He got that capability to get hot, and at any moment of the game I’m looking for Cob.”

White missed eight games with a left thigh bruise and then was brought back slowly by coach Billy Donovan the next two. But Ayo Dosunmu committed back-to-back turnovers late in the fourth quarter, White returned with just less than four minutes left to help save the day.

White finished with 14 points on 5-for-10 shooting, including 4 of 7 on 3-pointers, while playing 25-plus minutes, He’s averaging a career-low 19.6 minutes in 10 games, which also has affected his 3-point shooting, attempting only 4.8 per game and making 31.3%. Last season White shot a career-best 38.5% from beyond the arc and averaged 5.8 attempts per game.

With the Bulls having issues getting off to good starts early in the season, perhaps Donovan should replace Dosunmu with White in the starting lineup to see if it can fix the problem.

3. Everyone got in on the 3-point act

The Bulls finished with a season-high 18 3-pointers against the Bucks on 42 attempts, with Nikola Vučević adding four and Zach LaVine contributing three. The Bucks entered the game ranked fifth in the league in fewest 3-point attempts allowed at 31.1 per game, but the Bulls found ways to get someone open, and the lead dogs were unselfish.

“They moved the ball well and guys were knocking it down,” Bucks guard Grayson Allen told the Milwaukee Journal-Sentinel. “Usually with that team you kind of want it out of DeRozan and LaVine’s hands. We did that. We weren’t just trying to leave the other guys, but they just moved it and hit shots.”

One of the funniest moments of the night came when Antetokounmpo flopped and dramatically hit the floor after barely being touched on the shoulder by Vučević, whom he was covering. “Elizabeth, I’m coming, Elizabeth,” Bulls analyst Stacey King shouted while describing the Greek Freak’s flop.

For those under 60 who had no idea who Elizabeth was, King was referring to the catchphrase Redd Foxx made popular on the 1970′s sitcom “Sanford & Son.” Foxx’s character, Fred Sanford, would fake a heart attack while calling out to his late wife, saying “Elizabeth, I’m coming to join you, honey.”

Play-by-play man Adam Amin also wondered if Antetokounmpo had been watching the Qatar World Cup, where flopping has been rampant in games.

The Bulls no longer have an official “circus trip, the extended road swing caused by the arrival of the Ringling Bros. and Barnum & Bailey Circus to the old Chicago Stadium and the United Center.

But the six-game trek that began Wednesday has the same resonance. The Bulls travel to Oklahoma City on Friday before games against the Utah Jazz, Phoenix Suns, Golden State Warriors and Sacramento Kings. They return home Dec. 7 against the Washington Wizards.

The Bulls went 3-2 on a similar trip last November, including back-to-back wins over the Los Angeles Clippers and Lakers after being pummeled by the Warriors in San Francisco.

With the Jazz and Kings playing well and the Warriors and Suns a combined 17-2 at home, a 3-3 record on this most difficult trip probably would suffice for the Bulls.

But after an emotional win against the Bucks and taking on a rebuilding Thunder team Friday, the Bulls can afford to think big.