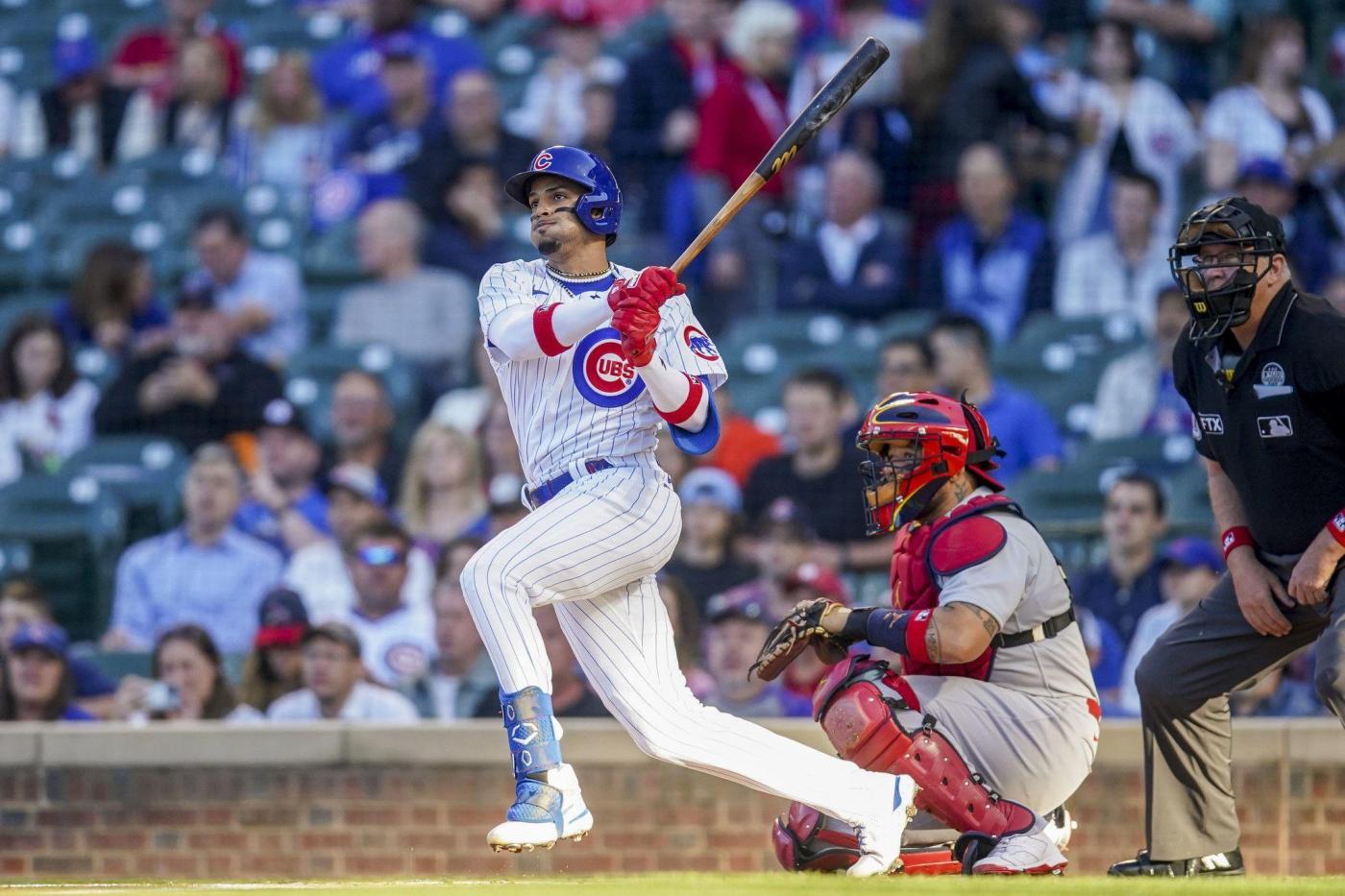 The Chicago Cubs’ path forward does not get any easier.

That can broadly be applied to the direction of a rebuilding organization as team President Jed Hoyer tries to build another contender. But in the short term, this stretch of the Cubs’ schedule will test how they stack up against some of the best teams in baseball.

The Cubs have only two more off days between now and the All-Star break. And for a banged-up group that too often is losing close games, the next five weeks could be a grind. The Cubs are trying to avoid a series sweep Sunday after losing 8-0 to the New York Yankees on Saturday.

Here are three thoughts on the team entering the series finale Sunday at Yankee Stadium.

The Cubs appeared close to getting Suzuki back in the lineup.

Earlier in the week, manager David Ross declared Suzuki was in play to return for the Cubs’ weekend series against the New York Yankees. Ross even declared he would “eat my words” if Suzuki wasn’t off the injured list before Sunday’s series finale. Well, that time arrived — and passed.

Suzuki has been prescribed rest for around five days to allow his strained left ring finger to continue to heal. The Cubs want to make sure the swelling dissipates and that Suzuki does not continue to aggravate it. So, that means no hitting during this period of rest.

Ross estimated Suzuki’s finger is at 85-90%. There is no timetable for his return and it’s also too soon to determine whether Suzuki will need a rehab assignment before he comes off the IL.

“He really wants to play and we try to take that into consideration,” Ross said Sunday. “And he’s tried to work out and push it a little bit and it’s still lingering a little bit.

“We all came to the conclusion it’s not smart to have a setback. … We’re just going to be patient with it.”

Suzuki’s type of finger injury essentially requires rest to get better. The Cubs’ understanding from doctors is that his finger does not need surgery to resolve the pain and swelling. That is good news at least. However, Hoyer said Saturday that “it’s going to take a while” for Suzuki to get back on the field.

“Candidly, I’m OK with that because this year it’s really important for him to assimilate, to face big-league pitching and figure out what he needs to do going forward in his career,” Hoyer said. “And coming back and and sort of having this nagging injury and not really be able to do it well, it doesn’t make a lot of sense. He needs to come back when he can really compete at this level, and it’s hard to do that when you have a finger swelling up all the time.”

It’s a discouraging development for Suzuki and the Cubs. He hasn’t played since May 26 in Cincinnati. The flukiness of the injury adds a level of frustration. An errant throw on a stolen base forced Suzuki to adjust his slide, and his hand awkwardly hit the second-base bag, jamming the finger.

Hoyer said Suzuki has seen “a number of doctors,” including getting checked out while the team has been in New York. Hoyer planned to sit down with Suzuki before Saturday’s game to figure out the next steps.

“He really wants to play and I think that’s part of the challenge that we’re dealing with,” Hoyer said. “I think he feel like he needs to be playing. Our sense is to try to be prudent about it, but I know we’re fighting a competitive guy. I do understand it’s quite frustrating, it’s a finger injury, right? That can be frustrating. You feel like it’s just a finger, but it matters.”

As the Cubs’ marquee offseason signing, Suzuki’s absence has been felt with the offense too often coming up short in close games. Although Suzuki was in an offensive rut before his injury, his presence in the lineup makes the Cubs better even though he isn’t in the same groove as when he was named National League Rookie of the Month for April.

The Cubs don’t want the strained finger to linger through Suzuki’s rookie season. That could force Suzuki to be sidelined longer than anticipated.

The decision to designate outfielder Clint Frazier for assignment Friday elicited a strong reaction from Cubs fans on social media.

A vocal portion of fans expressed frustration that the 27-year-old Frazier, whose remaining arbitration years gives a team control through 2024, should have been retained over veteran outfielder Jason Heyward. Those sentiments should, in theory, align with the Cubs’ big-picture vision as the organization has stressed the importance of weighing the future.

“Of course, there’s room to second guess all these decisions, but I promise you it’s unbelievably complicated trying to get it figured out,” Hoyer said. “There’s definitely decisions that we have made or will make over the course the next month or so that people have every right to sort of second guess or question. And believe me, there’s not unanimity when we’re making these decisions. It is really, really challenging.”

When it comes to Heyward, at some point his offensive inconsistency will become too much to ignore. Hoyer said Heyward “hasn’t performed this year or last year” to the level he has wanted. But Hoyer believes Heyward provides a lot of value fans don’t see, specifically mentioning how he mentors young players and his work ethic.

“I don’t think his struggles are different than any anyone else’s struggles in some ways,” Hoyer said. “So obviously, we made the decision we made regarding Clint and when it comes to Jason, we do see real value he provides on daily basis.”

The Cubs continue to say the right things about Heyward and how he still positively affects the team. Injuries will help him stay on the roster. But at some point, Heyward’s behind-the-scenes impact might not be enough for the Cubs to overlook his other deficiencies, regardless of how much money he is still owed through 2023, the final year of his contract.

The Cubs could have shifted outfielder Michael Hermosillo (left quad strain) to the 60-day IL to open the 40-man spot they needed Friday for Chris Martin’s return from the restricted list. Instead, the front office opted to DFA Frazier.

The next tests of Heyward’s roster security could arrive when Suzuki and/or David Bote are ready to come off the IL.

The Cubs don’t have a lot of choices to option out among their position players. Christopher Morel has been playing too well, serving as a spark plug at the top of the lineup while providing defensive versatility. P.J. Higgins is the only other position player with minor-league options remaining who realistically is an option unless they send out Nick Madrigal to try to get him going at Triple A. Otherwise, the Cubs would need to DFA someone.

3. Christopher Morel’s rise could give the Cubs the young star they need.

A standout 106 plate appearances into his big-league career is enough to think big about Morel’s potential.

Morel doesn’t turn 23 until June 24 yet he has established himself as one of the Cubs’ most exciting players. After going 0-for-3 in Saturday’s 8-0 loss, Morel’s streak of reaching base safely ended at 22 games to begin his MLB career, which set a franchise record. His defensive work in center field and up the middle has provided a boost for Cubs pitchers while stabilizing the leadoff spot in the lineup over the last three weeks.

Morel’s plate discipline has most surprised and impressed Hoyer.

“We need as many good young players as we can possibly put together to really put together the kind of core that can go forward and win,” Hoyer said. “It’d be wonderful if he emerges and can be part of that.”

Morel is an example of how player development and the rise of standout players don’t always come from an organization’s top-rated prospects. Morel reminds Hoyer of Willson Contreras and how he, too, wasn’t a heralded prospect to the point where the Cubs left Contreras unprotected for the Rule 5 draft before the 2015 season.

There are no guarantees Morel will stay with the Cubs for the rest of the season, let alone beyond 2022. Kyle Schwarber, in 2017, and Ian Happ, in 2019, are examples of young players from the previous core that the Cubs sent to the minors when they struggled. For now, that’s not a concern with Morel. Their confidence and belief in him is evident by putting him at the top of the order every game.

“His tools play in the big leagues, for sure,” Hoyer said. “You see his arm, that’s the part that I think we always knew could play. It was the bat-to-ball skills and the plate discipline. And I don’t know if this is a different level of focus he has up in the big leagues, but certainly that stuff has been unbelievably impressive.

“He’s having a massive impact on the team.”