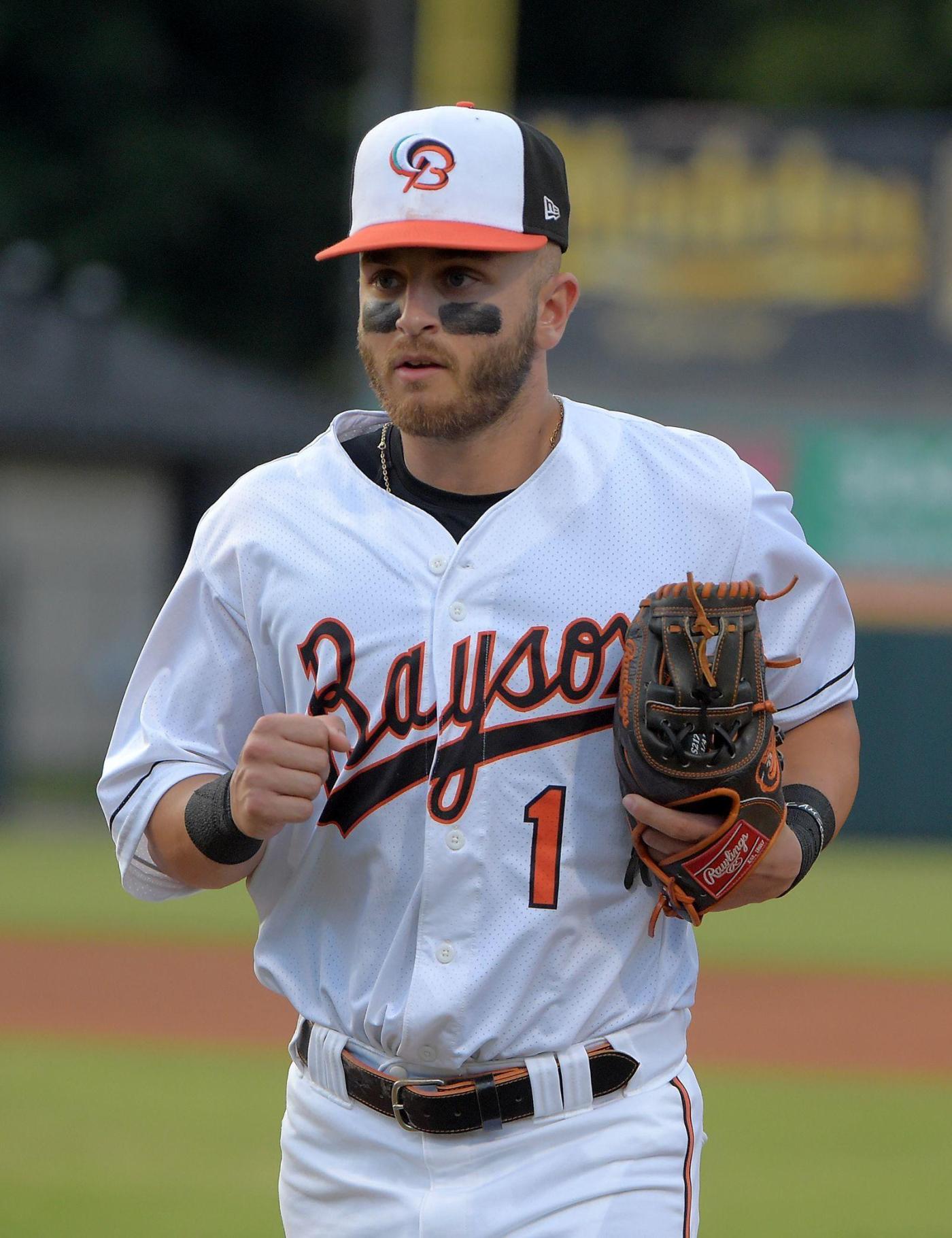 For about two weeks, Carter Young was a regular college student. He was on campus at LSU, preparing to play for the Tigers after transferring this offseason from Vanderbilt. But in the back of his mind remained the Orioles, the team that selected Young in the 17th round of the MLB draft.

And about an hour before the deadline to sign, Young put pen to paper on a deal that included a $1.325 million signing bonus — one that equates closer to a second-round selection but was possible because third-rounder Nolan McLean opted not to sign.

Perhaps that bonus played a role. But outwardly, Young credited the developmental system Baltimore has in place, including hitting coordinator Cody Asche, who was working with Young and several other recent draft picks in Low-A Delmarva on Thursday. Young is part of a group finding immediate success in their first taste of professional baseball at a full-season affiliate, and he’s making the most of it.

“The developmental side of the minor leagues and getting guys ready to play Major League Baseball, that’s what the main thing was for me,” Young said. “I mean, we’ve got Cody Asche out here. He does a really good job with the hitters, and just the whole program from what I’ve heard does a really good job.”

In his five games thus far for the Shorebirds, Young has recorded nine hits with three doubles. He’s joined there by first-overall selection Jackson Holliday, his middle infield partner who doubled in a run during his first game with Delmarva. Dylan Beavers, Max Wagner and Jud Fabian — all three of whom were selected on the first day of the draft — are immediately making noise.

As several of Baltimore’s top prospects, such as infielder Gunnar Henderson and left-hander DL Hall, near the majors, there’s a new wave of talent following. That’s always been executive vice president and general manager Mike Elias’ goal — to rapidly renew the farm system with fresh prospects. He called it an “elite talent pipeline.” It’s taking shape in Delmarva as many of the top prospects push for a breakthrough in Norfolk.

“It’s very exciting to get into an organization that’s heading in the right direction with a bunch of really, really talented players,” Holliday said.

Each week, The Baltimore Sun breaks down five of the top performers in the Orioles’ prospect ranks and hands out some superlatives for those who didn’t make that cut.

For the first time that Fabian could remember, he was booed. Not even in college, as a star for Florida, had he been heckled in the way he was in left field against the Salem Red Sox — the affiliate for the team he opted against signing for in the draft last year.

“Used that to kind of fuel me for that week,” Fabian said.

Now as a member of the Orioles’ farm system, Fabian has found his footing quickly with the team he hoped to land with from the start. In 10 games since his rise from the Florida Complex League to Delmarva, Fabian is hitting .386 with nine RBIs and nearly as many walks (eight) as strikeouts (nine). In the past week, Fabian’s OPS is 1.249, good enough to earn him a promotion to High-A Aberdeen on Monday.

In college, a batting average that dipped to .239 this spring hasn’t been an issue so far with an affiliate. Fabian said the adjustments he’s working on are related to his approach — ensuring he’s not chasing balls or pitches on the edge.

“It’s hard to throw a strike,” Fabian said. “No matter how high up you go in baseball, it’s difficult to throw strikes. If you help the pitcher out, it’s going to be a lot easier for him. So basically making the pitcher’s job hard on him is what I’ve focused on.”

A promotion to Triple-A Norfolk, which Cowser earned on Monday, always looked to be in the cards considering how well he performed in Double-A Bowie. Last week alone, Cowser registered 10 hits in six games, with one homer, two doubles and six RBIs — good for a .435 average and a .500 on-base percentage. In his final at-bat with the Baysox this year, he hit a walk-off homer.

Cowser, who was selected fifth overall in the 2021 draft out of Sam Houston State, has risen rapidly this year. He began with High-A Aberdeen before jumping to the Baysox, where he hit .341 in 49 games. Now with outfielder Kyle Stowers in the majors, it’s Cowser’s show in the Tides’ outfield.

In what has been a trend this season, Armbruester furthered separated his strikeout-to-walk ratio with eight punchouts compared to two free passes in his 5 2/3 innings for the Baysox. The 2021 12th-round pick out of New Mexico allowed just two hits and one run, which came on a solo homer, in his latest appearance.

Armbruester has gone through an under-the-radar rise. He’s not included in Baseball America’s top-30 rankings, even with a 3.51 ERA in 51 1/3 innings with 53 strikeouts to 10 walks.

As Cowser, the Orioles’ top draft pick from last year, excelled in Bowie, their second-round selection in 2021 followed close behind. Norby slugged his way to a 1.149 OPS last week for the Baysox, hitting three homers as part of his nine hits in six games.

Norby’s .916 OPS in Bowie through 48 games is far better than the .736 mark he posted in Aberdeen, although the IronBirds play in a pitcher-friendly ballpark. Between both levels, Norby has clubbed 20 long balls with 100 hits.

Long has spent all 67 innings this season with Delmarva, but his performances as a starter or as a long reliever have been steady — he has a 2.82 ERA with a 0.7 homer-per-nine-innings rate. While his walk numbers have ticked up compared to his time in the FCL after he was drafted in the 17th round in 2021, he still has a 2.54 strikeout-to-walk ratio.

He did better than that this week in four innings out of the bullpen. Long allowed three hits and struck out six batters in four scoreless frames.

Top prospects not featured so far

A major league debut for Henderson could arrive as soon as this week with MLB rosters set to expand by two on Thursday. Henderson, baseball’s top-ranked prospect, has seen his strikeout rate rise to 26.9% with Norfolk compared to 18.3% in Double-A.

But even as Henderson strikes out more frequently, he has proven his ability to hit for average and power, and his left-on-left splits have improved.

Hall has already made his major league debut, throwing 3 2/3 innings against the Tampa Bay Rays on Aug. 13 before he was sent back to the minors to work on transitioning to the bullpen. As a reliever with the Tides, Hall has a 5.06 ERA with three runs against him in 5 1/3 innings.

The command issues that have lingered throughout his career have followed him to the bullpen. In his first appearance, Hall struck out four batters but walked three and allowed a run in two innings. He settled to pitch two scoreless innings, striking out four without allowing a hit, before Hall gave up two runs in 1 1/3 innings Saturday.

The adjustment from Low-A to High-A hasn’t been smooth for outfielder Isaac Bellony, who’s hitting .175 in 47 games for Aberdeen. But last week, Bellony showed signs of righting the ship with six hits in 16 at-bats while walking four times.

Shortstop Darell Hernaiz ranked as the No. 25 prospect in Baltimore’s pipeline in 2020, but with an influx of draft and trade talent, he has since dropped out. But on the back of his eight-hit week that included four stolen bases, Hernaiz earned a promotion from Aberdeen to Bowie.

Between Low-A and High-A, the infielder has stolen 31 bags in 34 attempts. And this season with Aberdeen, Hernaiz hit .305.

Infielder Frederick Bencosme had a quiet week, but his season with Delmarva has been anything but. The 19-year-old earned a promotion to Aberdeen last week after hitting .336 with the Shorebirds. In his first nine at-bats for the IronBirds, Bencosme has notched a triple and a single.